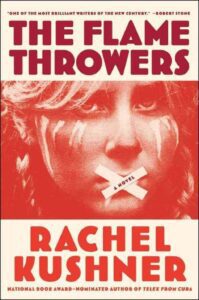 I don’t belong to a book club. Shocking, I know. But I do listen to a bunch of podcasts, among them one that occasionally suggests books and turns it into a book club-ish kind of thing. So, like the sheep that I am, I went out and bought this one so that I could sit and listen to a one-sided conversation about it after I finished. After all, why should Ms. Hipster have all the fun? Granted, I didn’t get any appetizers and wine like she gets, but at least I knew I could listen to a couple guys who are way smarter than I talk about literature in a smart way.

With that in mind, I can’t say the premise of this novel was particularly interesting to me. Set in 1975, when I was a wee lad, it follows this woman, Reno, and her pursuit of an odd mixture of motorcycle art and fucking European guys. I guess the former is her “job” and the second just a hobby. But, as it turns out, both are intrinsically intertwined.

So, yes, NYC in the 1970s is always a brilliant, dynamic place to set a novel. There are characters galore. The way Kushner writes, though, it sounds like everyone is a pretentious, Williamsburg hipster-type just looking to spend their family’s money in creating what sounds like hideous art. And there is our hero, Reno, in the middle of it all. But why? She doesn’t sound particularly talented art-wise and isn’t a classic beauty (though she’s portrayed as pretty) that some guy would want as arm-candy and is a little stand-offish personality-wise. So why? And the answer is the age-old Forrest Gump one. She’s basically in the right place in the right time to compel the story and move the narrative forward. She’s almost an invisible specter just kind of overseeing the histrionics of goings on. She’s the connective tissue from the move form NYC to Italy so the author can tell her story about the NYC art world and its vapid nonsense (or maybe that’s just the way I interpreted it) set against the union riots of the Italian workers. Two high-minded activities (one just because all fancy-pants art is somewhat high-minded) and the other high-minded because an American talking about little-known European historical politics is just a high-minded thing to do.

There were moments of cool here and there and some decent writing as well, but not enough to overcome my general disinterest in the subject matter and what seemed like a missed opportunity to explore a deeper dive into a connected global society.