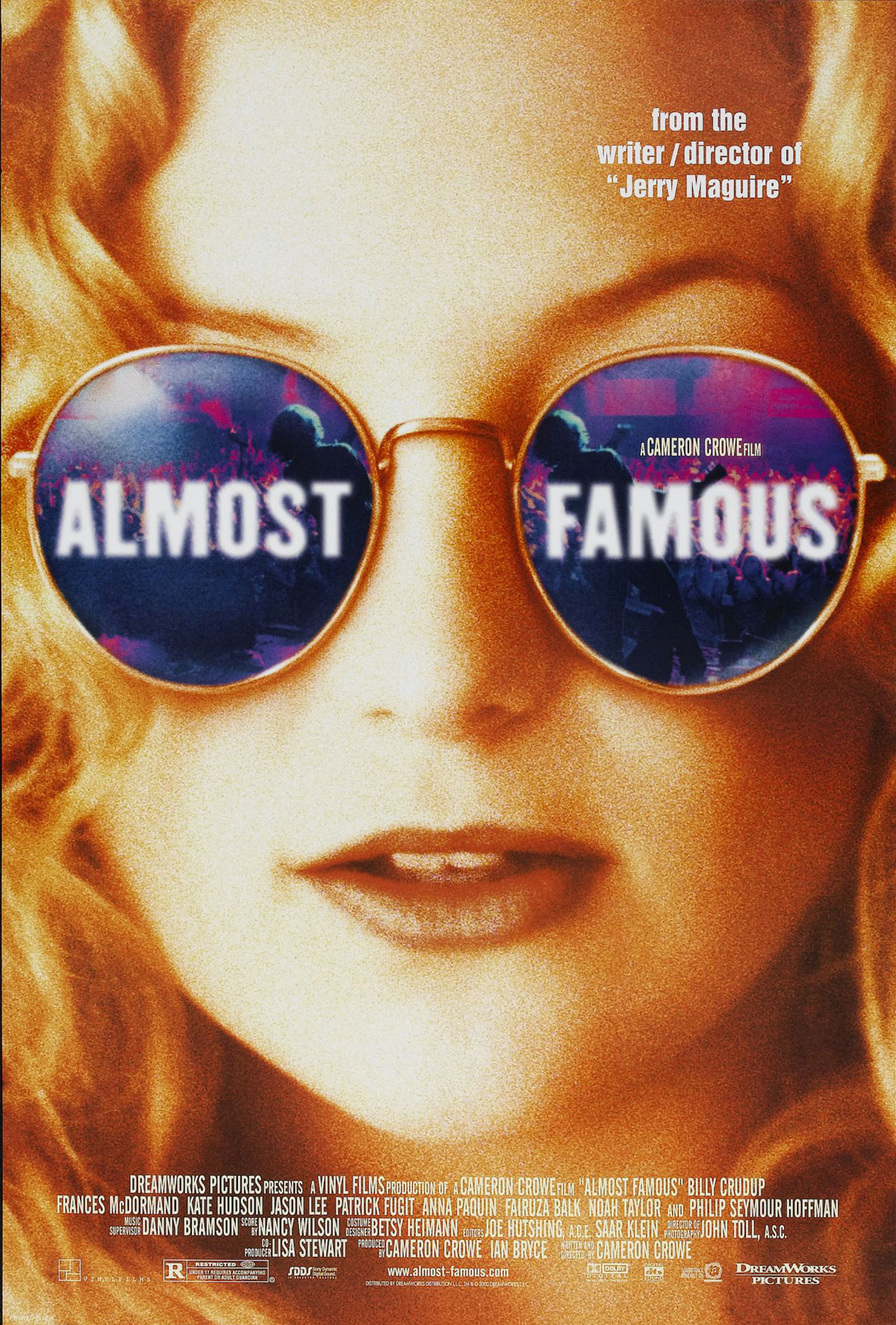 Every guy (and most women) dreams at some point of standing on stage rockin’ out to thousands of adoring fans. Those of us with little or no musical talent eventually come to terms with its impracticality (of course that never stopped Ringo) and decide that being a rock journalist would afford us some of the same thrills and not cause our fingers to bleed. Cameron Crowe has lived this dream, touring with all the biggest bands of the early seventies — and all while still a young teenager. It’s a great story, and certainly the kind of thing that would make a good movie. And it does.

The great thing about Cameron Crowe movies is that you can tell he really loves his characters. No matter how flawed, how egotistical, how completely devoid of normal human emotion, he creates them lovingly and intricately. He pours on the schmaltz, but we never feel he’s going for the cheap emotion. Now he takes the character of William, his alter ego, and puts him through the same sort of events he went through when he was William’s age. Amazingly, it isn’t really a story about William, but about all the people around him and what their lives turn into because of rock ‘n’ roll. It’s kind of a giant tribute film to all those people who were part of his growth experience.

Frances McDormand does a great job as his overly protective, vegetarian mother. Her part is written with tons of care and love. His sister is the rebellious older teen who gives him the gift of rock music. Again, a giant thank you to her. The best character in the whole movie is Lester Bangs (Philip Seymour Hoffman), the editor of Creem magazine, who gives William his first shot at rock journalism. Bangs is his mentor, his angel, and his voice of reason. Crowe really dedicates the film to him. Bangs is just like William/Crowe, the world’s biggest music fan who must write about the frailties of the rock stars they idolize. If you didn’t know this was based on a true story, some of the plot would seem a little ridiculous. Why would Rolling Stone hire a journalist site unseen for a cover story on a band that nobody seemed to know. William seems to give very little indication to Ben Fong-Torres (the R.S. editor who has some of the best lines in the movie) about what he plans to write. Well, it did happen, so we’ll have to take Crowe’s word for it.

So, William goes on the road with Stillwater, a fictional band somewhere along the lines of Creedance Clearwater Revival and immediately becomes sucked into the rock ‘n’ roll lifestyle. Not to say he gets into drugs and chicks, but he is awed by the freedom and the starpower music gives people. Billy Crudup should have been considered for an Oscar for his portrayal of the band’s lead guitarist and songwriter, Russell Hammond. He is the charismatic head of Stillwater who charms everyone he meets, and becomes the love interest of Miss Penny Lane (Kate Hudson), who is one of the industry’s most famous band-aids. Band-aids claim to be more than groupies, but are really just road girlfriends for the members of the band. They claim they are more than groupies, because they aren’t in it to sleep with rock stars, they’re in it for the music. They’re fans. One of my favorite actors plays the lead singer of Stillwater, Jason Lee. While Lee will probably never win any big awards for his acting, he always brings tons of personality to every part he plays (see Chasing Amy/Mallrats). Not bad for a former professional skateboarder.

Anyway, William goes on the road with the fledgling band, much to the dismay of his mother, and endures fights, love, deflowering at the hands of several lovelies, etc. So, to sum up, before this thing gets out of hand, Almost Famous is basically a giant, well-written love letter to everyone who introduced Cameron Crowe to music and love. Again, it’s always nice to see a script that actually had some time put into it.