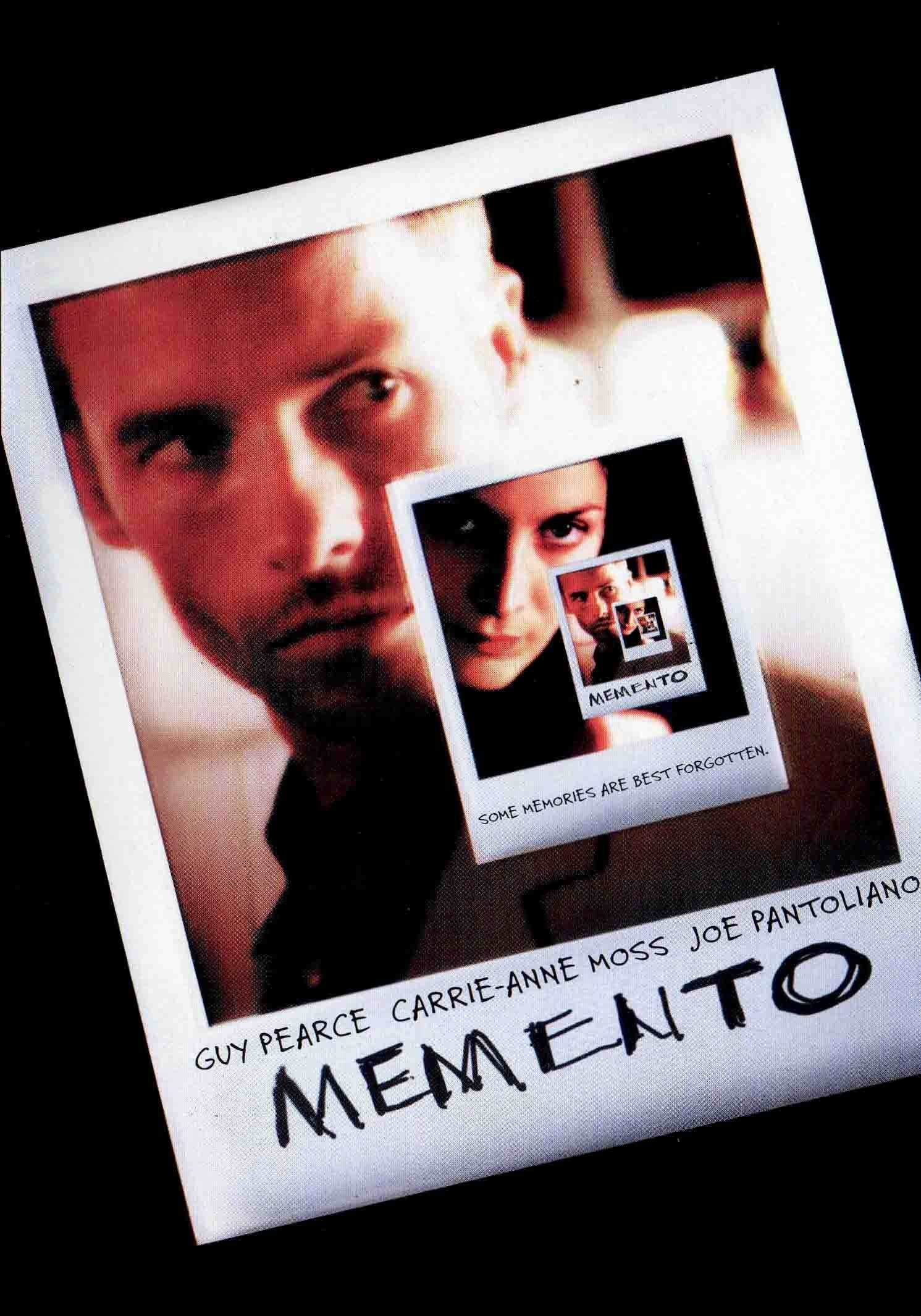 This is the first movie I have written about on this site that I have given the coveted five-star stamp of approval. I’m a huge fan of originality. Fight Club — that’s original. Brazil — that’s original. Pulp Fiction — that was original. It’s not even so much the story or the plot, but the way it is told that is so intriguing. When you can tell that some effort went into writing the script, that is something to cheer about these days. Not only has Christopher Nolan written a smart script, he has found a way to narrate a film that I have never seen before, nor have any of you.

Pulp Fiction had that cool out-of-order narration that made you think and piece things together. Of course a lot of films have tried that since, but it was extremely different at the time. Memento tells the story backwards in loose loops. The plot works backwards in time, overlapping itself with each new section, making the viewer feel like he/she is being sucked into the world of Leonard Shelby, who is trying to solve the mystery of his wife’s murder, all with no short-term memory. Leonard will start a scene with a cut on his face, and you won’t know where it came from until two scenes later when somebody puts it there. This whole thing is totally disorienting at first, but is a perfect introduction to the world of anterograde amnesia. This condition only allows Leonard to remember details in five or ten minute snippets. In order to fill in holes about who’s who and what’s what, Leonard takes Polaroids of everybody and everything. He jots notes and he tattoos clues to his wife’s murder all over his body. In order just to remember which car is his in a parking lot, he must have a photo of it in his pocket to remind him. Every time he meets somebody, he doesn’t know if it’s for the first time or the hundredth time. He must rely on photos and notes he has about that person–if he has any at all. This creates an incredible sense of paranoia about every situation for the viewer. Of course, his sense of paranoia is limited, because he has no sense of who he is supposed to be paranoid about. He can only go by the “don’t believe his lies” that he has written on the back of a Polaroid. On the same front, he may have “he will help you” written on the back of a Polaroid of a person who is trying to do him harm. It’s all a major mind fuck. We have no idea what anybody’s motivation is behind either helping or hurting him.

Once you get used to the narration style (this takes about ten minutes or so), you are in for a serious treat. The desire to find out what the hell is going on drives you to want the film to be over, but not in a bad way — more in a compulsive, frantic kind of way. Guy Pearce is perfect as the ex-insurance claims adjuster turned amateur murder investigator. He was great in L.A. Confidential, but is even better here as he subtly plays the pawn in a giant game of mess with the memory-loss guy. There are some creepy Val Kilmer vibes going on throughout the movie, but I’m not sure why. Joe Pantoliano is awesome as the smiley Teddy, who makes you waffle back and forth every scene between thinking he’s just a dude out to help Leonard, or the antichrist trying to con the poor guy into something really evil. Carrie-Anne Moss is also perfect as the tough femme fatale who has all sorts of tricks up her sleeve. Part murder mystery, part thriller, Memento is a mind-fuck that will probably take several viewings to sort out and fully appreciate. But once was enough to get a taste for its absolute coolness. I can’t wait for the DVD to come out, as this is the kind of movie that format is made for.