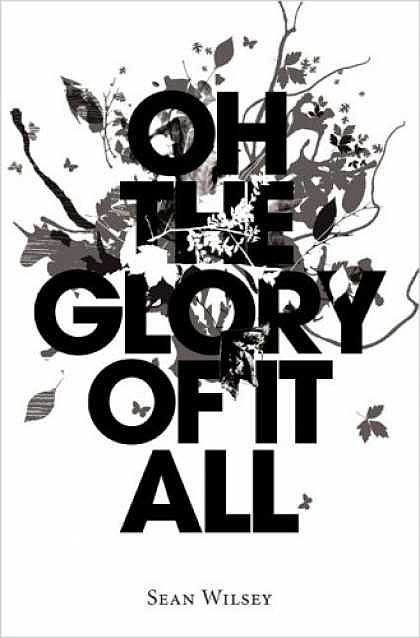 Oh the Glory of It All

It’s amazing how the voice in a lot of these modern memoirs sounds the same. It’s kind of a weird, snarky approach that is somehow both detached and deeply whiny. And just when you catch the author in a whoa-is-me moment, he springs into the self-aware deprecation. This one in particular is somehow a cross between Running With Scissors and A Million Little Pieces. You have the comedic, wacky family of the former, and the rebellious self-destruction of the latter. I’m going to assume this one is a little more truthful than Pieces, as a good deal of Wilsey’s life was played out in the San Francisco papers and the national tabloids. He even backs up some of his stories and claims about his evil stepmother and playboy dad with myriad quotes from articles. Despite the documentation, it’s still hard to believe that everything Wilsey says is 100% accurate and truthful. I suppose that dialogue is allowed to be bent and twisted and rethought and the gaps filled in. After all, none of us walks around with a tape recorder tucked in our belt or has a photographic memory (well, most of us). Wilsey seems to have an amazing recall for not only his actions and words, but his emotions as well. I, for one, can’t remember what order things came in just my senior year of college, let alone all my years on this Earth. Granted, I didn’t have a beautiful socialite mother who was San Francisco’s number one party hostess (and, in fact, had her own column and series of books on the subject), who was eventually thrown over by her rich husband for a famous romance novelist and then her for best friend. The same mother who eventually decided to not commit suicide for the moment to travel the world meeting national heads of state to “save the children.” Or an incredibly rich dad with his own helicopter and a taste for the ladies. And an evil stepmother who was once like a benevolent older sibling, but then ruled the mansion with an iron claw. It’s not to say that Wilsey uses his bizarre family life as an excuse, but… Actually he does. It’s a book filled with what some could see as a rich kid whining “daddy didn’t love me” every other chapter. Some of his on-again off-again dealings with his father seem a little trite at times, as he announces that the two of them are finished, but then thirty pages later announces the same thing with an even more perfect scene of the stand-offish father showing his love in his own special way. From chapter to chapter, the story is a compelling one much in the same way a Brtiney/Kevin string in a series of US Magazines might be, but ultimately it’s the narrative of one guy’s life that is most interesting to him and a small pack of insiders. Perhaps that is the downfall of all memoirs, really. Of course if I had been aware of this story when it was happening back in the 80s, and could now read the inside dope behind the tabloid pages, it would most likely be a real eye-opener. Yes, people, money cannot buy happiness.