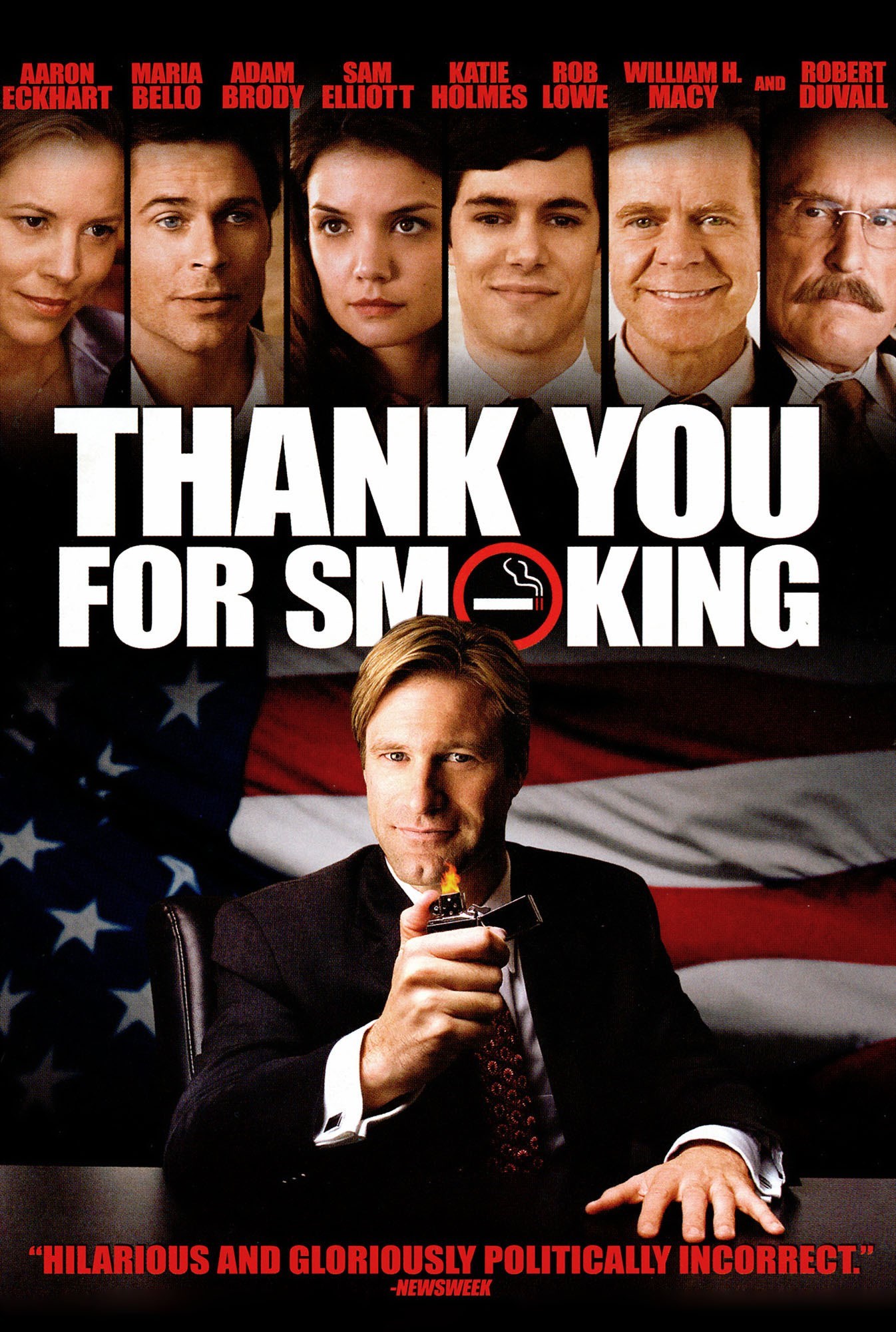 Thank You For Smoking

Wow this thing would have made a good book. Wait, it did! Actually I never read it but understand that it sold pretty well. I recall people reading it, but didn’t really remember people feeling strongly about it either way. After seeing the movie, I kind of understand why.

It turns out this movie isn’t really about smoking and big tobacco at all. I mean, it is in the sense that it’s the shell that holds this satirical redemption story together, but it was honestly just the most contemptuous topic to put our main character, Nick Naylor (Aaron Eckhart), in. I mean what group short of NAMBLA inspires as much ire as the greedy homicidal cigarette industry? And if your protagonist is going to be a lobbyist for said industry, that kind of makes him the devil’s pitch man, eh? And then the question becomes, do you have to actually have conviction when arguing a side, or do you just have to win?

Now our boy isn’t just some scrub lobbyist, he’s the king of all persuasive bastards. He pisses off people everywhere he goes, but remains, despite his awful rep, the king of his kid’s world. This terrible child actor, who looks to be straight out of model kid school of central casting, idolizes his father not because he’s persuasive or powerful but merely because he’s his dad. And it seems our main dude can compartmentalize his evil side and actually be a decent divorcee dad. And what does he have to teach his son? Why, the only thing he knows, of course: the power of words. There are some twists and turns that lead to Nick having to reconsider his life. He is a man with no discernible skills outside of speaking, and has absolutely no conviction or passion for anything in his life. He even admits at one point that despite what looks like overflowing joy putting his opponents in the ground is merely a way to pay the mortgage.

And then he realizes his son is his passion, and that it’s not cigarettes that motivate him, but the ideas. The ideas. How else to explain that he (nor any character) smokes a cigarette in the entire film? I’m sure I’m reading way too much into this, and it was just meant to be an ironic satire on the cigarette argument, as everyone, including the awesome-as-usual William H. Macy as th anti-smoking politician from Vermont look like a bunch of dopes, but I want to believe it went beyond that to a more human story. I’m such a softy.

Regardless of what the hell the movie is about, I found myself saying (actually out loud) that Eckhart should get more roles. The guy just oozes believability and makes a completely hateable character into a completely sympathetic single dad with a weakness for pretty girls and an awe shucks grin that makes us forget he’s vying with his buddies in the gun and alcohol lobby for the highest body count.