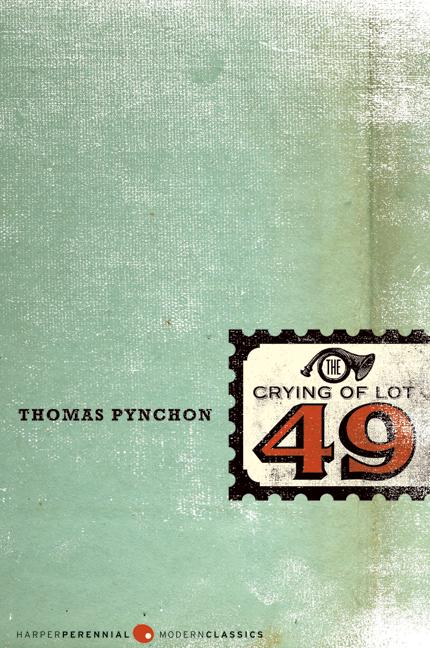 The Crying of Lot 49

I took the wimpy way out. I could have tried to read Gravity’s Rainbow again. It would be my third time. The furthest I ever got in that abomination was page 158 (out of 980 or so). That’s only two pages shy of The Crying of Lot 49‘s whole 160. Pynchon’s prose is daunting. His sentences twist and turn and run-on and fold in on themselves. This is the longest 160 pages has ever taken me to read and this is his most basic, straight-forward book. He is constantly quoted by high-minded MENSA-types, and is probably admired by a generations of nerds everywhere. Despite that, his stories have, like Tom Robbins, a good deal of absurdity. It starts with his characters’ names, which are at the same time ridiculous, and completely impossible to remember (the protagonist in this case is named Oedipa Maas). I found myself having to leaf back through the book to recall who was whom. This one was at least reasonably linear, but the subject matter was just bizarre. Our aforementioned protagonist is named the executor of the will of her now deceased ex-lover. He was apparently a wealthy real estate mogul in an imaginary town in California. As she delves into his holdings and his life, she uncovers what she believes to be a secret society that is somehow tied in with the Postal Service. This discovery spins the story into crazy curlicues of narrative that tendril out in several directions but never really re-address the core question of what the hell is going on. It’s really as if Pynchon is screwing with the reader seeing how far he can push him to care about obscure fake plays about ancient postal service empires. I’m clearly not smart enough to figure out what he’s after here, but, again, that’s not the point. I swear the man sits in his hut or castle or wherever he lives and laughs at all the pretentious shits who claim that his novels are the key to the universe. Perhaps, like Oedipa herself, we are just chasing a ghost to no end.