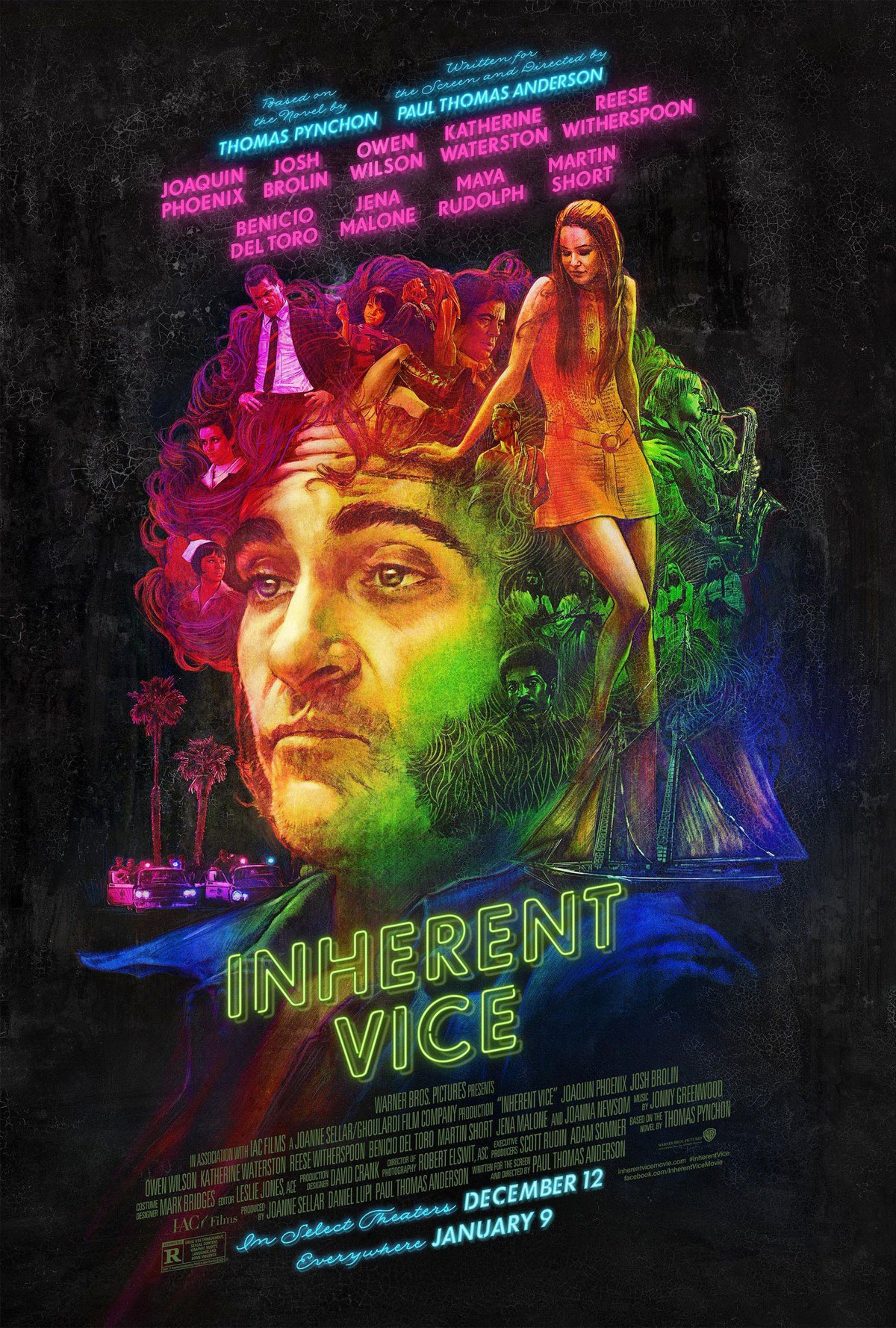 I think I’ve come to a conclusion — or have just gotten to the point where I’m okay saying it out loud — that I don’t like stoner humor. If there’s a character smoking weed the entire film, like our protagonist, Doc Sportello (Joaquin Phoenix), does in Inherent Vice, I’m kinda out. Take your Pineapple Express? No, you fucking take it! Or your Harold & Kumar Go to White Castle. Okay, there’s some funny shit in that. But mostly I just find stoned people annoying. Unless, of course, they’re The Dude from The Big Lebowski. But that’s just because he’s iconic, and his stoner attitude is classic. Maybe I just don’t like young stoners. Or — because this film is set in 1970 — hippie stoners. Whatever the case, the movie just missed the mark for me.

But, as I think about it, maybe it’s just that I don’t love Thomas Pynchon stories. I, like millions of others, couldn’t get through Gravity’s Rainbow. It seemed to be overcomplicated just for the purpose of being overly complicated. But I have gotten through or almost gotten through several of his other novels, including The Crying of Lot 49, Vineland and Bleeding Edge. The last of which I forced myself to finish in a really unhealthy way. And, looking back, I was super-unhappy about reading the others as well. It was not a fun, nor a funny experience. He’s esoteric and gives characters dumb names and, frankly, seems stoned himself what with the meandering plots and oddball scenes that seem to exist only for his own amusement. So, how, you ask, can one of America’s best directors, Paul Thomas Anderson, handle filming an author’s stories that are generally considered unfilmable? Welp, it turns out even he had trouble making sense of this weird, hippie detective story. Even though he took two and a half hours to not do it.

I’m not even going to try to outline the plot here. But suffice it to say that Doc Sportello, nominally a private investigator in an imaginary Venice-like town called Gordita Beach in LA, is asked by his ex-girlfriend, Shasta (Katherine Waterston), to help her new wealthy, older boyfriend out of a pickle. Or a perceived pickle on her part. Meanwhile, he’s simultaneously hired by two other people completely unrelated to the Shasta ask and unrelated to one another to find two completely different people. An embarrassment of riches for Doc’s business (though it’s unclear if anyone is actually paying him), but a complete cluster for us, the viewer, trying follow what the hell is going on. So much so that I just kind of checked out. I mean I perked up a little bit when a wacky Martin Short shows up as a drug-slinging dentist and Reese Witherspoon as a D.A. who is inexplicably having a fling with Doc. But Short’s roll felt oddly like Steve Martin’s dentist roll in Little Shop of Horrors.

In fact, I think I’ve uncovered the problem. Pynchon’s book and this movie are supposed to be absurd. And funny. And, yes, Doc is pretty absurd. But his character and the dude playing him, Joaquin Phoenix, are not. Anderson described this thing as essentially a Cheech & Chong movie with fart jokes. Does that sound good to anyone? At all? It also doesn’t read that way at all. It’s not even a Bob and Doug McKenzie. There is very little to laugh at here. And even less to guffaw at. It’s confused if that’s what he was going for. And he probably had the wrong actor in the lead if that’s what he was going for. The difference here is that The Dude is likable. Harold and Kumar and likable. Bill and Ted are likable. The actors who play them aren’t weird or off-putting. In other words, they’re not creepy Joaquin Phoenix with his Wolverine hair. And therein lies the issue. The film doesn’t know what it wants to be and the dude they cast to keep it afloat is a wonderful actor, but is just too intense and odd to hang with for that long. Especially when the plot is all over the place and we have to rely on him to guide us.

Okay, so what have I figured out. I don’t like Thomas Pynchon’s novels, even though I’ve read three and quarter of them. His novels, even if they were interesting, are pretty much not meant to be turned into films. And Joaquin Phoenix may make for an interesting character, but is hard to make a likable or comedic character. Oh, and stoner movies starring stoners lower the stakes in a way that makes things boring. Like most thing that help progress the plot happen not because the character is cunning or smart, but out of sheer stupidity or luck. And that leads to lazy plotting and the ol’ coincidence matrix. You know, hippie shit. And when it’s a film like The Big Lebowski, which is essentially a plotless film made up of great scenes that revolves around an amazing character, that’s fine. But when that same tack is taken (the two movies are not dissimilar in that way) here, and we don’t have that center-of-the-universe dude, it’s just a collection of meh.