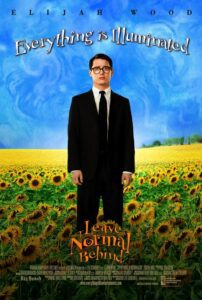 Let me just start by saying that I loved this book. That pretty much sinks any chance that I’m going to like the movie, right? Adaptations often suffer because of their lack of internal dialogue, bad casting and butchered plot lines. I had been warned before seeing this by several people that the heart of the book had been ripped out, the serious and the funny on both sides of the spectrum destroyed to create a middle-of-the-road blah fest. That was one of the great aspects of the book, which swung so well between extreme loss and sadness and the exuberance of our wacky narrator and his adventures in broken English. I decided just this once to pretend I didn’t read the book.

On the surface the film presented itself much in the way Big Fish did (also a book I read before seeing the movie). There was the fantastic and the mundane and imagination somewhere in between. When I let go of my pre-conceived notions of what the movie should be, I found that I really enjoyed it. Hutz, whom I saw play solo at a Joe Strummer tribute show a while back, was so absolutely perfect as the wack-job Ukrainian with a heart, you’d think he’d been acting for years. He just embodies the humor, innocence and deep pain of the character from the book. The actual Jonathan Foer character is almost non-existent in the book. He steps into the background, bringing the others (including Grandfather and his dog Sammy Davis Junior Jr.) to the forefront in the letters written to him by Alex (Hutz).

While the second historical narrative about the town Jonathan seeks is ignored for the most part in the film, the movie does stick to the general plot for the most part. There are some changes to one plot twist involving the grandfather that really cheesed it up a bit (and made things a little more linear and easy to explain), but I’ll forgive Schreiber for the change as it worked in the context of the ultimate turn out.

Elijah Wood did a nice job as the odd, stand-offish Jonathan. The goody glasses were a little heavy-handed, but you could see genuine restraint and eventual emotional warming spread across his face as he became closer and closer to Alex and the story of his family that was just a serendipitous discovery in his quest to discover his own. I wouldn’t expect anyone to watch this movie and instantly throw it on their top ten of all time or anything, but I think it’ll creep up on people and become a pretty well respected piece of filmmaking over time. It also signals a great start for Liev Shriber as a director, as there were some very cool visual scenes, and he got terrific performances out of his actors. It’ll be interesting to see how he follows it up.