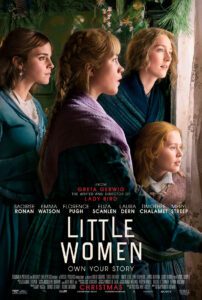 I am just killing it with these year-old movies! Movies based on 152-year-old books. I’m honestly not sure why I wanted to see this to begin with. It is definitely not in my typical wheelhouse, but I suppose seeing what director Greta Gerwig would do with a classic text drew me in. Despite not being the world’s biggest fan of the slightly overrated Lady Bird. I know, I’m sorrrrry!

I have to say right off: are we sure Gerwig is a good director? I think her writing is quirky and very specific, but are we sure she’s a great director? Because I found this movie particularly confusing. And that is due in great part to the directing and editing choices that were made. The plot isn’t in any way complicated, but the scenes do jump back and forth in time. And she chose, for some reason, to not have transitions between those scenes, which made a first viewing that had me constantly wondering where and when we were. Which was more distracting than it was artistic or interesting.

What she does do is hire good actors. All the little women are top-notch. Laura Dern is always terrific when she’s not being an over-the-top crazy person except in Big Little Lies, of course). And they even manage to sneak in Meryl Streep for like two seconds. My only complaint? Not enough Streep! Timothée Chalamet seems to be just about everywhere right now, but I’m glad this is the film that has him wear those really ill-fitting pants. Apparently there were no skinny jeans in the 1860s, but you’d figure they could find some britches that didn’t look like a giant, wool diaper. But, I digress.

You know the story. It’s a family of women. The men are gone or dead because there’s a war on. So we get to see each of them figure out how to grow up in this old-timey world when women are obviously less valued than their male counterparts. Although that’s not really it, despite the lead character, Jo March (Saoirse Ronan) hitting that wall. Sort of. She’s a writer — one of questionable talent — who runs into a relatively kindly publisher in NYC who asks her to write her female characters in a certain way to satisfy the reading audience. If this is the message of the film — and it seems that way a little bit based on some meta stuff that Gerwig adds at the end of the film — it doesn’t really hit very hard or consistently. In fact, she kind of undermines her own message eventually, though it’s unclear what’s real and what’s a writerly flourish.

The little women of the March family suffer setbacks and are are kind of lightly challenged by stuff. I’m way too used to creepy television and was sitting there at one point when the elderly neighbor was showing generosity toward the youngest daughter wondering when he was going to turn into a creeper. And was really surprised when he just turned out to be a nice, old man. And that’s the thing with these old tales. We’ve become so used to the stakes always being soooo high. That death and dismemberment are around every corner. Murderers darkening every alley. So when the biggest thing at stake (besides scarlet fever) is unrequited love, it comes across as kind of a shrug.

I get that Gerwig has a certain aesthetic. It’s this smart, but twee, approach to relationships and drama. There’s a sly humor behind it all that is subtle almost to the point of slack. There is some of that rat-a-tat-tat dialogue at certain points, but more times than not it seems to be more Ronan and Chalamet’s talent as antagonistic protagonists than the script itself. It’s most noticeable in Chalamet’s performance, as he spends the whole film contorting his body in weird ways (often times lounging or laying about in strange positions) to distract from the lackadaisical script. Which may or may not be intentional in its lackadaisicalness. It’s quirky.

I always forget how much movies cost these days, but $40 million for this one seems high. The majority of the film takes place in the March home or the field between that home and the large manor house next door. There are some shots in France and some interiors in what we’re told is NYC, but otherwise it’s a pretty confined set. I suppose those costumes are pricey and maybe they blew a ton on the Streep cameo, but that money doesn’t really show up on screen. It definitely feels like a stage play at times. And, look, I totally realize I’m not the target audience for this, but it doesn’t mean I can’t be. I like a good love story. I dig a coming-of-age tale. But if we’re doing a “based on” version of an old book, I expect either some edge or some really sharp wit to be added. The attempt was there, but it just didn’t hit for me.