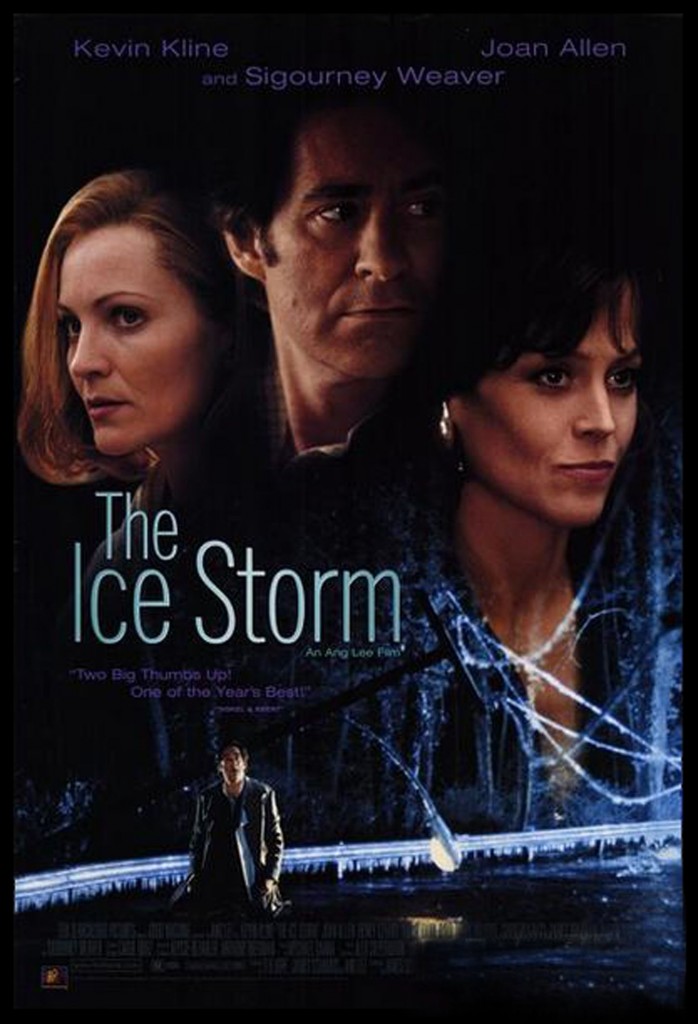 Never has a metaphor been so obvious. The Ice Storm, the frosty exterior, the freezing of emotions — soulless wandering in a frigid scene. Anyway, this film has more indie film trappings than any in recent history, complete with random scenes shot from a distance, unnecessary angles of inanimate objects, and the sparse, lonely music that spells dread. I’m not sure if these are just left-over effects of a film school education, or a director just trying to fill space that would otherwise be crammed with explosions and car chases in a normal Hollywood film, but they are somehow effective, and even haunting at times.

As is typical with indie movies, the plot is practically non-existent and merely takes a slice of life from your average fucked-up, middle class Connecticut family. The Ice Storm is a very quiet movie about family dysfunction and suburban despair, but done in a much different way than a movie like American Beauty. Gone are the heroic characters who decide to take charge of their lives. Gone are the quirky urban professionals who tell the corporate world to go fuck itself, taking a job at a fast food restaurant. These characters are just sad, lonely and really caught in the mire of the sexual revolution that is the early 1970’s. The only character that seems to have any choice in his life is the narrator Paul Hood, (Tobey Maguire), the Hood’s 16 year-old son, who just wants to score with a wealthy co-ed at his exclusive NE prep school. His voiceover bookends the movie, as he reads a Fantastic Four comic book as if it were a work of high art. This may be stretching a little bit (or not at all), but the characters from the Fantastic Four seem to correlate with his own family, with his father as the Thing, (a man made of stone) his mom as invisible woman, (hello?) his nymphomaniac little sister as the Human Torch (in the movie she burns everyone she touches) and he as Mr. Fantastic (the prodigal son). Despite its many quirks, the movie stays with you long after you pop the tape out of the VCR.