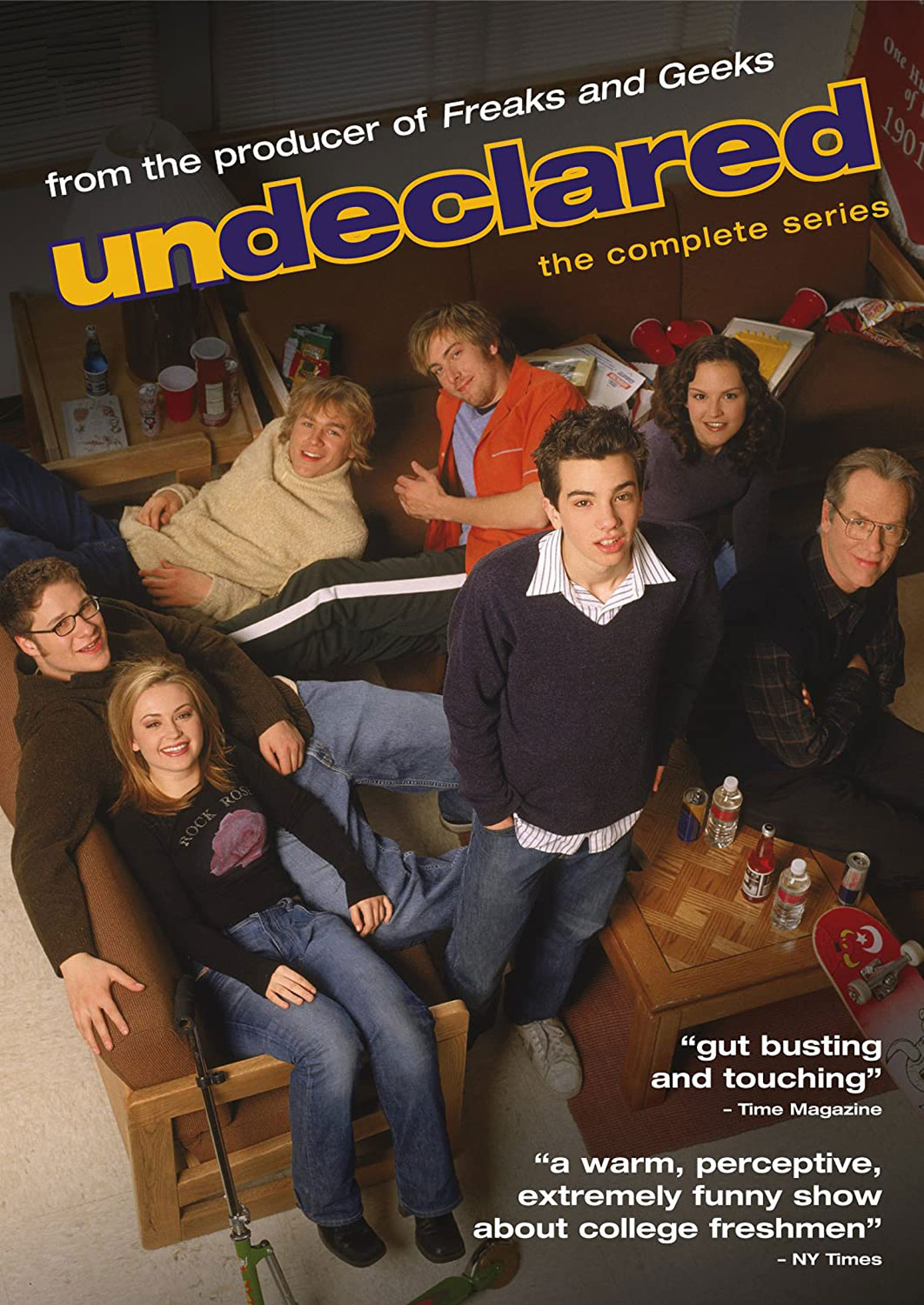 Here’s the thing about Judd Apatow’s second bite at the coming-of-age TV show apple. Whereas Freaks and Geeks felt naturalistic and warm, Undeclared feels like a TV show. And a particularly Fox one at that. You can almost feel those opposing forces fighting each other in each scene, as Fox execs probably noted to amp up the zaniness and maybe add some fourth-wall breaking, while Apatow wanted to create something more slice-of-life, loose and realistic. What resulted was a bit in the middle, somewhat limp and surprisingly uninspired.

To be fair, though, recapturing the Freaks and Geeks magic was going to be tough. Especially when there were some clear struggles trying to make a show that must have come with some heavy notes. The first of which, I imagine, was that, unlike Freaks and Geeks, there needed to be a very clear anchor character. An audience avatar on which to hang our emotions. In this case it’s college freshman geek, Steven Karp (Jay Baruchel).  And then we need to give him an object of his desire, Lizzie Exley (Carla Gallo). And, of course, surround them with a cast of funny people.

But, before I proceed, let’s talk about the Lizzie character. I did some pretty simple math and uncovered something a little disturbing. So, Lizzie comes into her freshman year with a boyfriend, Eric (Jason Segel). Let’s assume Lizzie is 18. Eric works at a Kinko’s type place and is supposed to be 27. By all accounts the two have dated for four years. Which means they started dating when she was 14 and he was 23. That’s pretty sketchy. But, going even further, she claims to have been faithful to him during their relationship prior to college. But… then at one point, totally earnestly, says she was a “slut” in high school. When??? In her pre-Eric days as a twelve and thirteen year old? And, yes, I know this is a sitcom and not Dark, but some simple subtraction would have avoided an otherwise problematic situation. Moving on…

The magic of Apatow’s work is generally his casts. That was certainly part of what made Freaks a classic. Here, despite a bunch of the actors from that show making appearances, there is something lacking from the core cast. Baruchel is decent as Steven. He feels like a realistic college freshman based on my experience and emotes and is cringy in the right way. Seth Rogen, as one of his dormmates and friends, Ron, isn’t given a ton to do other than admit he’s Canadian and act like his usual sarcastic self. Beyond that is Steven’s dad (Loudon Wainwright III), who is going through a divorce crisis and decides to try to relive his college days with his son. He’s probably one of the better things on the show. Otherwise, the cast — save the guest appearances — kind of falls down.

I’ve never really understood the appeal of Carla Gallo as a regular cast member. She’s fine in small bites, but as a main character, her presence and acting doesn’t bring much to the table.  She’s not a great actress, isn’t particularly funny and something about her just doesn’t jump off the screen. So, as the almost co-lead with Baruchel, it feels like a real miss. Especially since it makes you wonder what he sees in her. Charlie Hunnam. I tried to watch him in Sons of Anarchy and just couldn’t get through it. In this show, he’s supposed to be the hot British acting major who girls just throw themselves at. I’m not here to judge his attractiveness, but I will question the hell out of his accent. Seriously, it is the weirdest accent I’ve ever heard. I believe he’s actually English. But he sounds like an Australian living in South Africa as the son of Arkansans. It’s absolutely bizarre-sounding, and his acting — which may or may not be affected by his weird inflections — is super-sus. Monica Keena as the dim Rachel Lindquist feels like a blonde stereotype and is just kind of a throw-away character, despite being central to the friend group. Same with the equally dumb, but way more manic, Marshall Nesbitt (Timm Sharp). He’s certainly more noticeable than the wallpaper that is Rachel, but Sharp plays him so high-strung that I found it hard to watch sometimes.

Ultimately, it felt like Apatow figured he’d throw in veteran actor Wainwright as the literal adult in the room and then bring in some wringers like Amy Poehler, Kevin Hart and Adam Sandler to keep the rest of the cast afloat. Because, frankly, on their own, they’re not doing a lot of interesting work. Sure, there are some cute moments, but the whole will-they-or-won’t-they [again] between Steven and Lizzie is old by episode three. And the extremely limiting college setting — which takes place predominantly on the one dorm floor due to what I have to imagine were limited production dollars — was already creaky before it got unceremoniously canceled by Fox after one season.

I had watched some episodes of this series during its original run in 2001/2002, but in this watch the only place I could find it was on YouTube. And, let me tell you, that is not an optimal watch. The quality is somewhere between crappy and scrambled porn, so it certainly didn’t help my enjoyment of the content. I believe I heard an interview with Apatow at some point where he said it’s not streaming on a proper platform because the music licensing deals weren’t done with those in mind and the expense to relicense the music was prohibitive. So, who knows if it’ll ever be available in some quality better than absolute garbage. Or maybe they’ll just swap out the pop music with some free keyboard noodling. Or maybe I totally imagined this conversation.

Whatever the case, I hope it somehow finds its way to Hulu or some legit platform. Because, despite my disappointment with the product, I think it makes for an interesting archive of some talented folks’ early work. And also, perhaps, can act as a cautionary tale to any creators out there to only get into business with entities who will value your vision. This is me being an Apatow apologist, I guess, but something or someone clearly got to the content in the couple of years between Freaks and this show, which just didn’t feel like it was made by the same person.