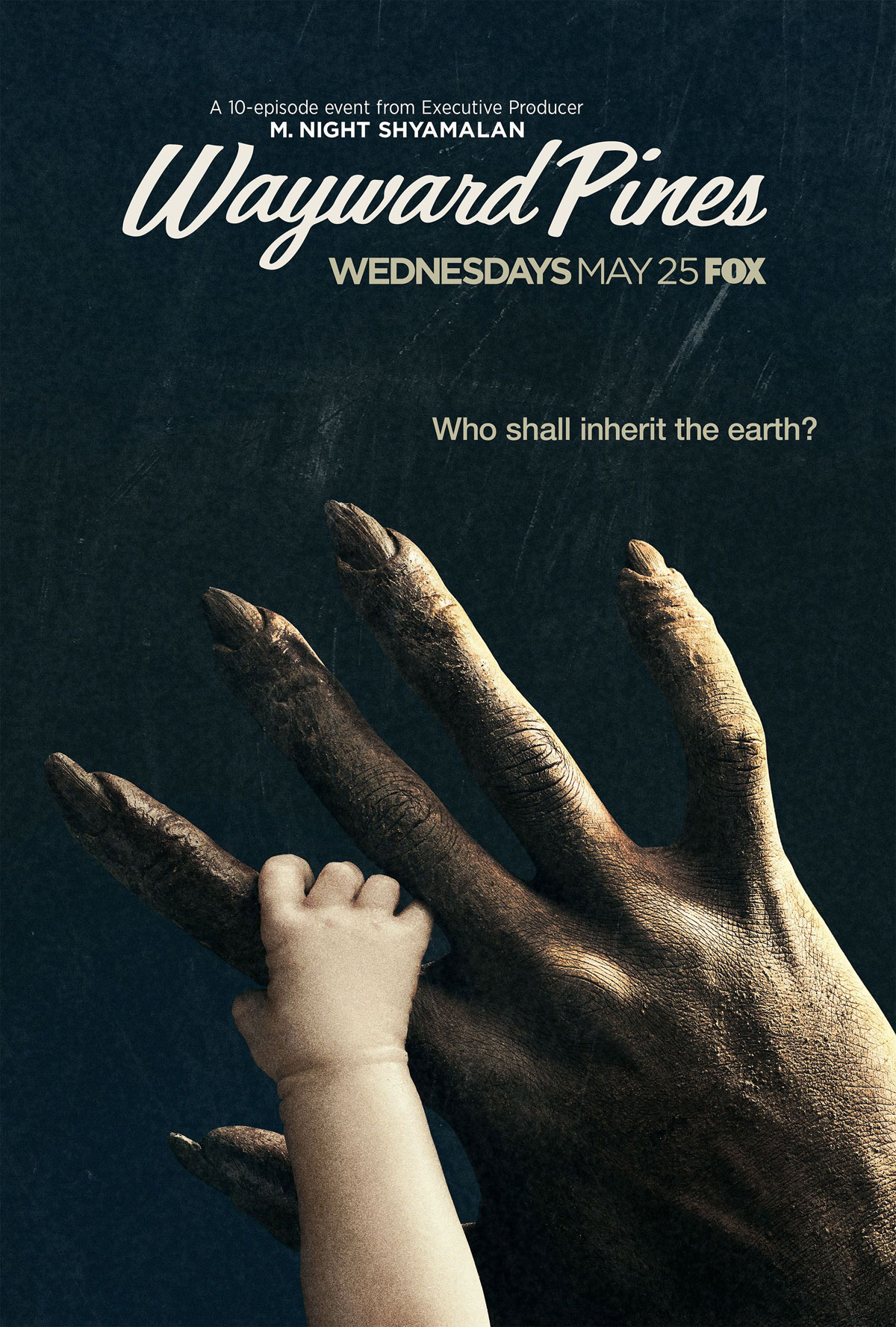 How does one write a review of two seasons of a show without at least spoiling the first season? Especially when, like in Wayward Pines, there’s a mystery that ends in a twist of sorts in episode five, which is not so sneakily entitled “The Truth?” The answer is that you don’t. The series got canceled after two seasons anyway after ending season two on a cliffhanger, so who the fuck cares, really?

Can we talk about season one’s protagonist, Matt Dillon? Not his character, Ethan Burke, but Matt Dillon, the “actor.” The guy was funny as a dumbass in There’s Something About Mary. Though I mainly associate him with one movie from childhood, My Bodyguard, one from adolescence, The Flamingo Kid, one from my teen years, Drugstore Cowboy and one from a very formative time in college, Singles. I know he’s been in a bunch of other films, but even in that diverse group, he ends up always playing a kind of lunkhead (or stoner lunkhead in the latter two). It fits his acting style, which is somewhere in the Sly Stallone meets Keanu meets less-energetic Matt LeBlanc territory. In other words, his range is about nil and it’s tough to take him seriously sometimes. He’s a decent comedic actor, oddly, but when asked to play “smart” and serious as he is in this show, it verges on laughable at times. Plus, he has this weird gate throughout the show, as if he needs knee surgery or has hip dysplasia. And, as a guy who is supposed to be an active secret service agent, you’d think that would hurt his career. He is pretty handsome, though!

Based on a series of books by Blake Crouch, they also got M. Night Shyamalan involved in the series to apparently give it some of his special M. Night magic. Considering the series, on the surface, is almost exactly the same as his horrible movie, The Village, that he totally sucked up, I suppose it makes sense. Second chances to get it right and all. You can kind of sense his fingerprints all over this thing, which, as we know, can sometimes not be a great thing. Granted, I didn’t read Crouch’s book, so this ham-fisted way of unwinding an interesting mystery could have been 100% his doing.

So, let’s just get past the so-called mystery. Ethan Burke (Dillon), a secret service agent, crashes on his way to investigate the disappearance of two of his fellow agents in Idaho. He wakes up and finds himself in this weird Idaho town where he apparently can’t seem to connect to the outside world and is faced with what feels a bit like some sort of Stepford thing. The place is clearly creepy and he continuously gets stymied trying to get out to get back to his family. It’s super Twilight Zone like. He eventually finds his ex-partner for whom he was searching (Carla Gugino) who seems to have mysteriously aged ten years in five weeks. There is an electrified fence keeping them in and some sort of looping reality that causes him to drive in circles when trying to escape the town (which is taken directly from Les Revenants). That last part never seems to come back after the mystery is solved (and is discernibly not supernatural). But is the place a CIA experiment, some sort of Lost thing, or something else entirely?

So, let’s get past the mystery. It turns out that some crazy scientist essentially created a human ark. He kidnapped a bunch of people he felt would be good to restart a society, put them to sleep for two thousand years and then woke them up in large groups in order to populate Wayward Pines. The last bastion of humanity on Earth. Taking humans’ place outside the town’s walls are these things called Abbies, which came about because of climate change (I think) and are essentially something between a human and an animal. And for some reason they crave human flesh. Even though the Earth supposedly reconstituted itself after humans died off and there is wildlife all over. So why stalk the humans, who number about 1,000 in a small corner of Idaho, when there are millions of nice deer, fish and birds and bears to eat? Unclear and unexplained.

The show goes on to question whether living in a society that closely monitors its people, kills those who don’t follow the rules in the public square and assigns jobs and spouses to people based on something that, again, they don’t explain. And is all that worth the protection it affords them. It’s essentially a study on authoritarianism and how much is too much to give up for the sake of “safety.” Ethan eventually replaces the seemingly blood-thirsty sheriff (Terrence Howard) and tries to turn the society toward freedom rather than crushing oversight, but soon falls into the same pitfalls trying to keep order that his predecessor does. But with worse acting.

I will give it to the show. They aren’t afraid to kill main characters the hell off. By a couple episodes into season two, pretty much everyone — with a couple exceptions — who was a lead in season one has been murdered. Some with little fanfare. It’s odd. Jason Patric comes in to replace Dillon, and with it brings way better acting and a surgeon character (with his laughable name, Theo Yedlin) who is actually more interesting. Granted, everything else on the show becomes entirely stupid. The world has been taken over by the youth. All of whom dress in vaguely, not-so-subtle Nazi uniforms, declaring martial law and practicing eugenics. They literally pair up boys and girls who have just gotten their first periods to get pregnant to keep the population up. It probably would have helped to stop murdering people, I’d think.

Aside from the weak plotting, meandering narrative and some serious holes in logic, there was the whole Fox of it all. There’s just something about the quality of the video and the sets that feels like Fox. Not FX or USA or even NBC. But Fox. That 24 thing. I can’t really explain it, but there’s something about it that felt verging on cheesy. A little too bright when it should be dark and a little too dark when it should be bright. A little too loud always. The scripts a little too hyperbolic and/or shrill. And the storylines sometimes more blunt instrument than scalpel. I must say, the first four episodes of season one were the best of the series. Before we knew what Wayward Pines was. Before we saw the people in bald caps and green paint playing the monsters outside the wall. Before, like The Village, the mystery was ultimately not as cool as the million things I had in my head. And, after the reveal, was nothing but disappointing.