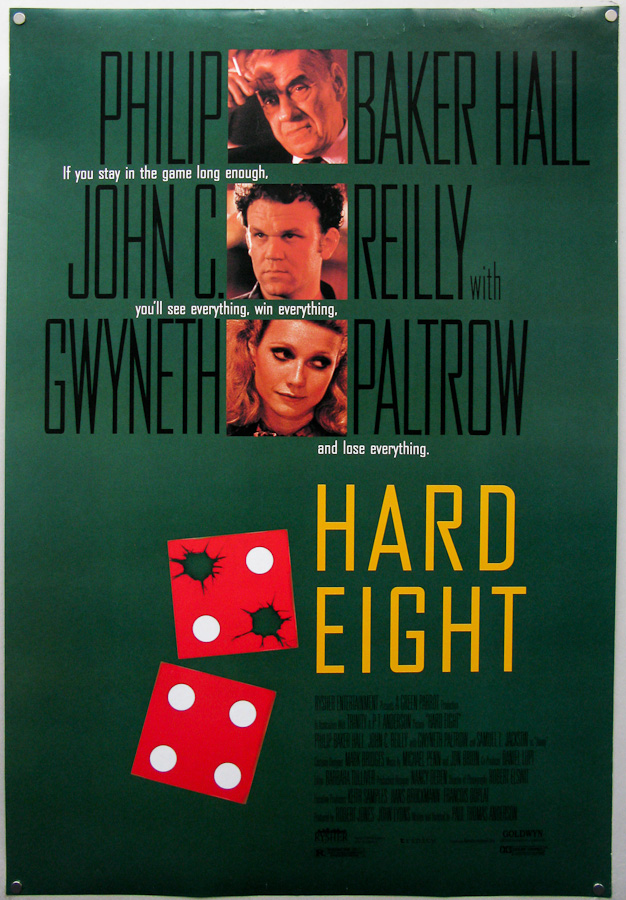 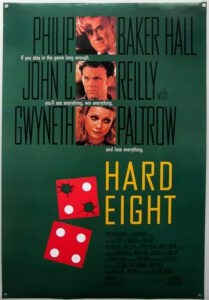 From the director of Boogie Nights and Magnolia comes his little seen debut, that actually has a different title in most of its mentions, Sydney. This film has the look and feel of an independent film from the very beginning, as we see John (John C. Reilly — Dirk Diggler’s porn buddy in Boogie Nights) sitting in a lump next to a lonely diner outside of Las Vegas. Actually, is it my imagination, or do all cool indie films have to have a scene in a diner with two dudes smoking cigarettes? Anyway, John has gambled away all of his money trying to get enough cash to have a burial for his recently deceased mother. Along comes Sydney (Philip Baker Hall), the grizzled old gambler with a mysterious past. He feels for John and promises to teach him how to work the tables and get himself a free room, some cash and the same pathetic life he has led.

The more I think about this film, the more similar to Boogie Nights it becomes. John is very much in the Eddie Adams/Dirk Diggler mold, an innocent who just wants to please everyone — a victim of his own situation. He is brought into this pathetic world of low-rent gamblers by the king of the low-rent gamblers. It’s a small group of specters who troll the shabby Las Vegas casinos betting on everything from craps to Keno, not really making any money, not really losing any. It’s a sad lonely world, where the players have an inflated sense of their place in the world.

Paul Thomas Anderson shoots the movie in such a way that we feel there are very few people in any of these casinos, almost as if all the occurrences in the movie only take place through the eyes of four of five characters. So while John plays the Dirk Diggler character, Sydney plays the Jack Horn/father figure character, who seems to have everything going for him inside this little nothing world in which he lives. Enter the Rollergirl character, Clementine (Gwyneth Paltrow), who instead of playing the innocent porn star plays the innocent hooker. Much like Rollergirl, she’s as soft as a hooker can be, doing it for all the right reasons, but ashamed all the same. So, John learns the ropes and falls into a life in the casinos with Sydney.

We then flash forward two years and John has become a regular in the scene and has partnered up with another old pro named Jimmy (Samuel L. Jackson). We’re not actually sure what Jimmy does for a living, but he drives a Cadillac and never seems to be short on cash. He also dresses like a blaxploitation star and carries a gun. He plays the Reed Rothchild character from Boogie Nights (the role that John C. Reilly played), as the guy who’s been around and buddies up with the innocent to kind of take over the tutelage where the father left off.

Philip Baker Hall is one if those character actors that has been around for a while and seems to be everywhere and nowhere. He speaks very softly and rarely wavers from a monotone grumble. We know his character has a shady past and has done something unforgivable, but we aren’t clued into what that might be until near the end of the film. He somehow looks guilty the entire movie without ever saying anything, as if the weight of his past has been pressing on him for thirty years. We are never told why he picked up John that day from the diner, why he decided to take him under his wing until this past act is revealed. It is this twist that is supposed to shock us, but we’re not really that surprised. It’s not that Anderson gives it away, but it just doesn’t hit us hard enough. Anyway, Paltrow gets into some trouble with one of her clients (even though John has begged her to stop hooking because he loves her) and, of course, things end up getting violent. I know I mention this in almost all my comments, but I am getting really sick of someone needing to get shot at the end of every single independent movie! Anyway, see the movie if you are into character studies and don’t mind some stilted dialog and a lot of slow, moody scenes.