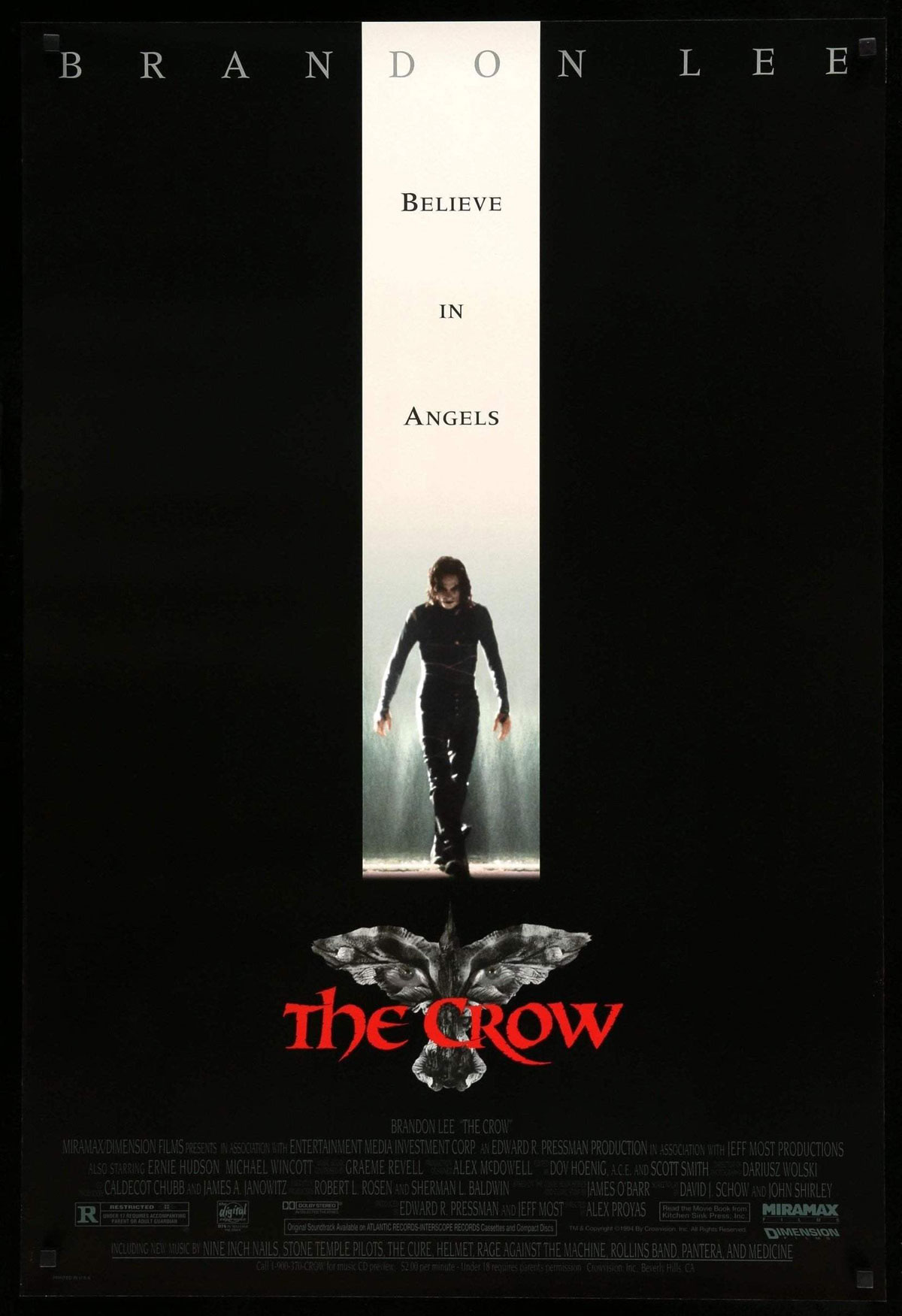 Man, people loved this goth stuff back in the day. This dark, rainy-night Nine Inch Nails shiz. Sexy vampire types in tight-fitting black clothes and white makeup. A hangover from grunge, the rise of “serious” comic books and America’s love of soundtracks were also a hook. And in 1994, there was no more butch, emo goth fare than The Crow. Add to it one dead star and the birth of conspiracy theories galore and you have yourself a hit film.

I know I was certainly the target audience for this movie. And it definitely hit me exactly the way it was supposed to. I dug the music. I dug the look. I dug the mystery. And, like everyone else, I had to see the movie where Brandon Lee essentially died on film. To see if I could spot the moment shit went haywire. I did not and could not. I suppose being morbid came with the territory. Especially for those of us who grew up watching Bruce Lee movies and were actually excited to see a new Lee get into action films. And then shit went sideways.

Watching this all these years later reminds me what passed for cool 26 years ago. And what that amounts to is a mime-looking dude, Eric Draven, sitting on or near gargoyles on a rainy night in Detroit pining over his dead fiancé while plotting how to murder her murderers. Eric Draven, having been murdered by these same murderers as well on the night in question. Lucky for him, though, he rose from the dead. A fact that somehow goes unexplained. Literally, there is no mention of why he, of all people, gets to crawl out of his grave to avenge the murders while everyone else in this god forsaken, dreary-ass city who is murdered by this band of idiots don’t. It’s a mystery, I guess.

What isn’t a mystery is how incredibly basic this plot is. Draven and his almost-bride get killed by some dudes named Funboy, Tin-Tin, Skank and T-Bird. They’re just drugged-up rapey hooligans who work for this long-haired crime lord named Top Dollar (Michael Wincott). I’m not even certain it’s clear why the hell they were in Draven’s apartment that night in the first place other than to harass his lady over some tenant dispute. But it turns out to be one day before their wedding day. Which, for reasons that are equally unclear, was to be Halloween. As a person whose birthday is on Halloween, I can tell you it’s not a great day to get married. Especially when you live in a city that is lit on fire every year on Devil’s Night, which is October 30th. It just seems super-impractical.

Anyhow, Eric (who is in some sort of Goth Rock band called Hangman’s Joke), comes back from the dead a year later, gives up his day job as a musician and becomes this unstoppable killing machine. A dude with no formal training in anything other than maybe guitar is all of a sudden an amazing knife thrower, shooter, kicker and acrobat. Makes total sense. Lucky for him the band of morons he has to exact vengeance on are a bunch of screw-ups. He makes quick work of them and their “fire it up!” chant and move on to the big bad, Top Dollar. Which means that the movie is essentially a flashback of bad stuff, a kill scene and a post-kill-scene that involves him squatting on stuff and brooding for each one of the hooligans. That’s about it.

The dialogue in this film is almost non-existent. Although there are some of the worst lines in movie history. But like bad good, not bad bad. My favorite is the following line from Top Dollar when telling Draven that he’d killed his magical crow:

It’s completely unclear from this line if Top Dollar is saying that the crow is saying “Fuck, I’m dead.” But I think so. This is just one of the many laugh-our-loud moments in a film that is really meant to be funny. I don’t think. Granted, Ernie Hudson’s chain-smoking cop character is pretty funny when he wants to be. He’s honestly the only actor in the movie who seems to be looking around wondering what the hell they’ve gotten themselves into. Especially considering all the on-set issues the production had that didn’t involve their lead actor accidentally being killed by a stunt gun. Hudson is straight-up charismatic and one of the better things in a movie that is, quite honestly, a bit of a mess.

And, yes, this movie seemed cool in the 90s. Our tastes were pretty pedestrian if this is any indication. Shit, I thought Judgment Night was pretty cool because they blasted rap-rock mash-ups to scenes of Everlast running around with Emelio Estevez. I haven’t seen it since I first saw it in the theater in 1993, but I imagine it probably doesn’t hold up all that well. But, like The Crow, I’m willing to see it again through my younger eyes. I just have to be prepared to be disappointed by the filmmaking aspect of it, and watch it merely for the aesthetic weirdness that we all craved in an era that was entirely not cool at all.