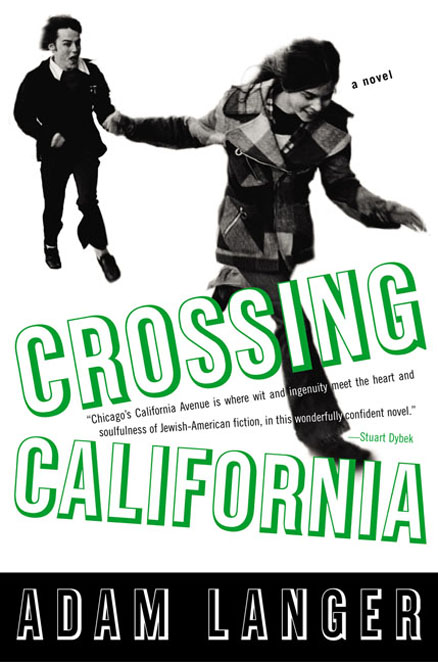 Despite the mystique of California in both songs and movies, the love affair hasn’t made its way to books in the same way. It’s trendy and somewhat hipsterish to write about lesser states in order to up your doldrums factor (aka: introduce realism into your story) that will bring back the author’s abusive childhood in Nowhere, Nebraska or Malady-Ridden, Maine. Now, I thought, here’s a nice book about Cali that may recall some of my childhood. It turns out the damn book is about Chicago! This bastard Langer had fooled me. Me, the Baron of Books, the Regal Reader, Prince Peruser. And then I remembered that I had read the synopsis on Amazon and knew this fact like six months ago when I actually ordered the book. Anyway, it turns out California is a street in downtown Chicago that approximates the proverbial “tracks.” The West side is the right side (ironically), while the East side is the wrong side (although not that wrong until you go further East past whatever Avenue). The story essentially follows the exploits of three families, and their extended network, living their intertwined lives west of California, east of California and east of east of California. Some are upwardly mobile, some the victims of circumstance and others simply going where life leads them. I’m always shocked when I read an overtly Jewish book that has topped best seller lists. I know my people pride themselves on telling and/or showing people how smart they are by reading books (why do you think I write these horrible reviews–I’m not all ‘f’ words and b-movies), but making up less than 2% of the U.S. isn’t exactly going to move markets–unless we’re all buying 2000 copies. But this book is all bar-mitzvahs and brachas. It even out-Jews your best Roth book. The story is clearly based on the author’s upbringing in that neighborhood, as his familiarity is almost photographic (and may be at that). He claims in the afterward that he just draws little details for his characters from his own life, but I have a feeling that if you looked hard enough his adolescence is sitting right out there on the page. The book takes place around the Iran hostage crisis and the shift in the US after the 1980 election of Reagan. The characters are between five and ten years older than me, and what a difference those years make (as was pointed out by the author). When even “Yeshiva Boys” are getting laid and smoking pot in high school, I know I missed a lot growing up in the era of “just say no (to both sex and drugs).” Jealousy aside, I did enjoy Langer’s breezy prose and clever interweaving of narratives. Like many novels of its ilk, the story serves as a slice of life in a finite amount of time during a certain era, and isn’t in itself a particularly robust or fascinating plot-driven narrative. The book ends with much of the character’s lives and arcs unresolved in a big “aha!” kind of way, but, like life itself, things aren’t always wrapped up neatly for everyone in a certain chunk of time. I’m always secretly disappointed when these books just kind of end without like the world exploding into a trillion pieces, or the benchwarming slow kid getting his big chance to run the ball and then dropping dead from his terminal brain tumor to the cheers of the crowd after crossing the goal line, but I’ve watched too many movies and sitcoms where we just expect our endings to be tied up with a bow and handed to us on a silver platter. I should be used to the non-ending ending by now; I really should be. But a guy can always pray for that fireball or that Martian Chronicles ending, can’t he?