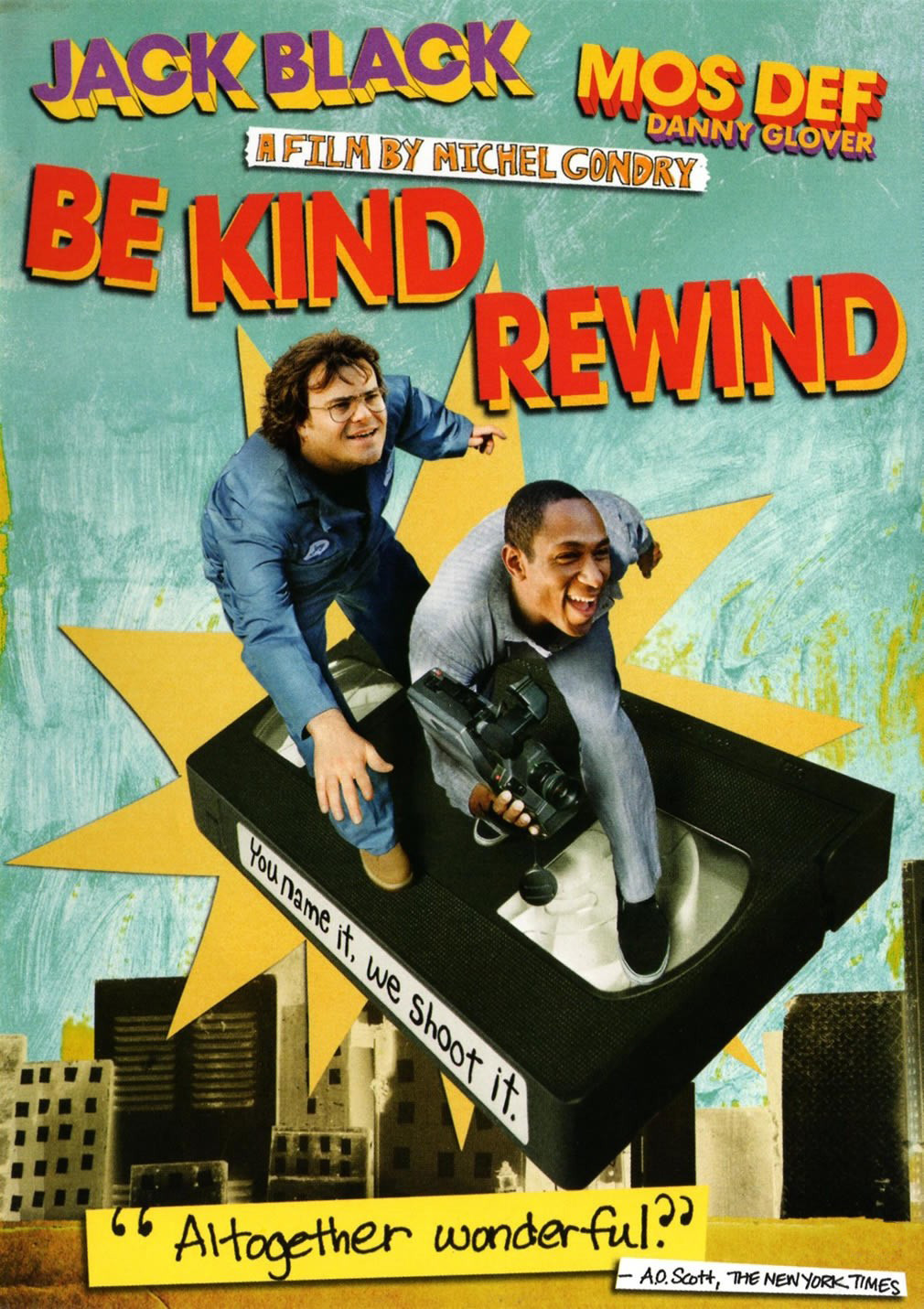 I’m one of those people who find Jack Black funny for about 2.5 seconds and then want to chuck him in a dumpster with Jamie Kennedy, Tom Green and Robin Williams during his second coke phase (or non-coke phase). Manic for manic’s sake just makes for sucky acting and frayed nerves. Michel Gondry, on the other hand, is a pure original, and generally makes smart, intriguing movies. Some, like Eternal Sunshine, border on brilliant. Not so much here.

I don’t know if it’s Gondry’s, uh, Frenchness or what, but after his first movie spoof his ideas fall completely flat. Here was a vehicle to make hysterical remakes of any film ever made, and the ones he chooses to focus on don’t hit the mark, nor mine the depths of true American pop culture. This is my dream set up. I have like hundreds of films I could have suggested, but Gondry just didn’t follow through on the concept fully.

And what was the concept? An entire store full of videotapes (which in and of itself is ridiculous) gets degaussed when a magnetized Jack Black walks in. Mos Def, his buddy, is minding the store while the shop’s owner, Danny Glover, is out of town. Now everyone coming to rent tapes (because they apparently don’t have DVD players) finds them blank. In order to combat this, Black and Def enlist a couple folks to put back what Black destroyed by recreating the erased films using their camcorder and props found in alleys and whatnot. The films, despite veering pretty heavily from the original films’ plots, being acted in by Black, Def and a female friend, and only being a fraction of the original length become hits with the neighborhood toughs and grandmas alike.

Meanwhile we have a total Breakin’ 2 situation going on. The worst cliché in moviedome, by the way (see just about every 80s ensemble comedy and just about all Adam Sandler movies), as Glover’s building is about to be razed by the city to put in a bunch of condos (or something) unless he can raise enough money to make improvements to the crumbling edifice. Save Miracles! So instead of a car wash or a break-off or even a golf tourney or yacht race (see One Crazy Summer) they decide to raise funds by allowing people in their community to be in the films they’re shooting for a fee, taking on roles in their favorite movies and getting to keep the end product for viewing with their friends and family.

The plot around this old building is based on the most likely fake story that a famous jazz legend was born and raised in the room upstairs. Glover, who is actually really good in this, insists on the validity of the story, and the final film at the film festival is an enacted documentary about his life (played by Mos Def). Those scenes of the community, who are otherwise struggling in their real lives, coming together to work on this film and rally around a local hero (real or imagined) are actually quite touching, and salvage the film somewhat. This is the magic Gondry can spark. I just wish he had put as much effort into some of the up front and maybe consulted someone more engrained in the head of an American of a certain age to make some of those remakes more compelling and/or funny. Wasted potential is always the worst part of any so-so review.