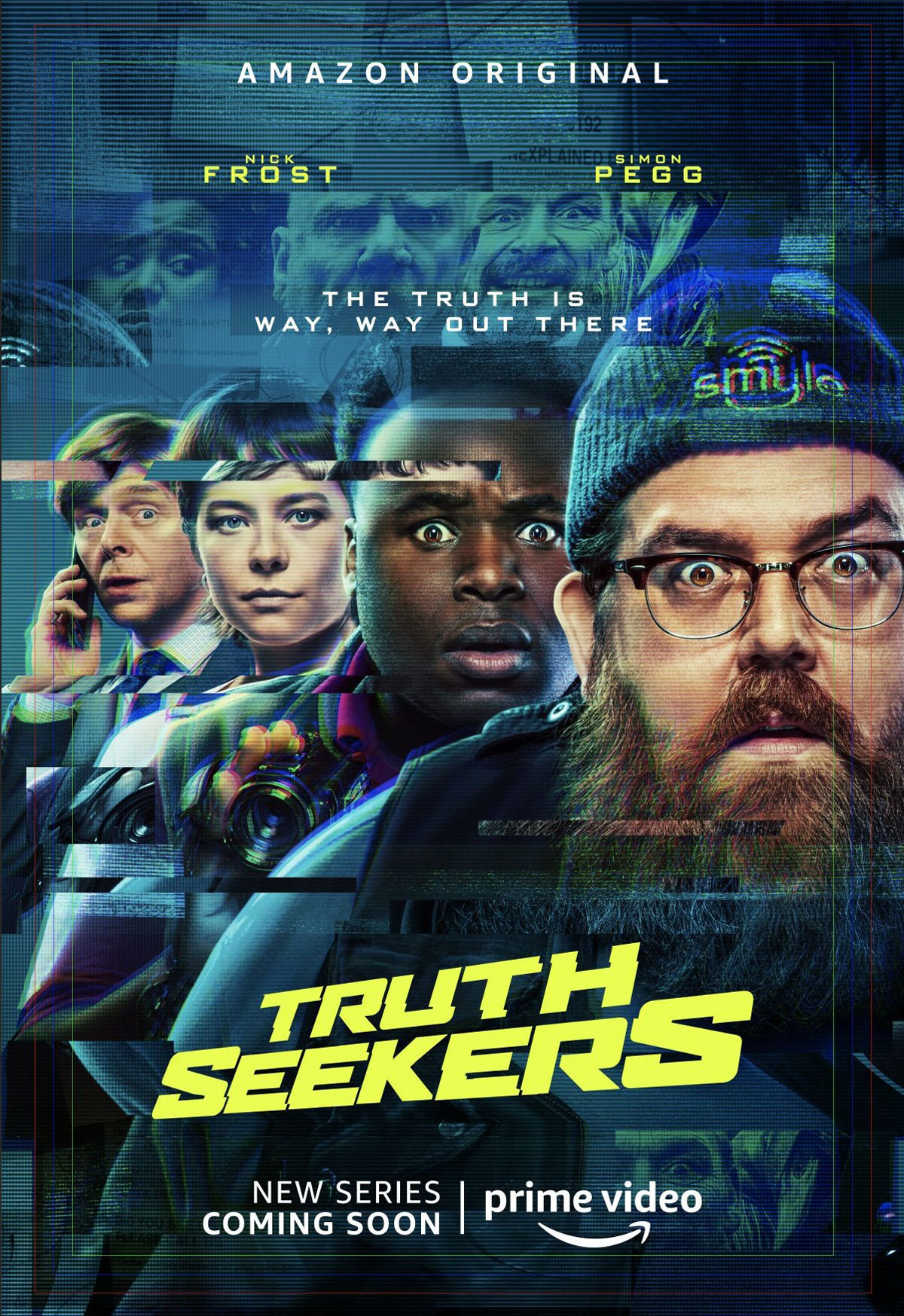 It’s weird. There was this show, Ghosted, that I started watching in 2017/2018 (and pretty quickly abandoned) that I swear is essentially this same show. I mean, not exactly, but, like Truth Seekers, is a comedy ghost hunting show that had similar themes, energy and ghost stuff. This series, however, seems to suffer from a desire to mingle their horror with their comedy, and their ghost hunting with a larger story about a cult or social commentary on communications monopolies? Honestly, I’m not sure what the whole point is. Also, I’m not sure Amazon ponied up the big bucks for this thing, as it’s pretty obvious that they cut a lot of corners on hiring and special effects.

Why, you ask, would I watch something that is clearly outside of my normal wheelhouse? Not that I haven’t enjoyed other horror-comedy series like What We Do In the Shadows. But this one just seemed goofy and, frankly, kind of dumb and confused. But… it has the Nick Frost and Simon Pegg team behind Shaun of the Dead and Hot Fuzz! Thing is, Frost is just an actor, and while Pegg was a writer on those two movies, it’s now obvious that without the third member of the triumvirate, writer/director Edgar Wright, the magic just isn’t there. Instead, you’re left with what feels in the same universe as those mash-ups, but more of a faded copy than a sharp original.

The star here is Nick Frost, who is looking particularly unhealthy with his ballooning weight and heavy beard. He’s always played the pudgy laddish sidekick to Simon Pegg, but now as a man creeping up on 50, he’s really let himself veer into Chris Farley territory. It’s almost uncomfortable to look at. That aside, he plays this character, Gus Roberts, who is the #1 cable installer for a Verizon Fios equivalent in the UK called Smyle. Oddly — and maybe this goes to the budget constraints I mentioned earlier – he seems to be the only cable installer at Smyle. He talks directly to the boss (who also seems to own Smyle?), played by Pegg in a bad wig, and we never see another employee of the company save Gus’ new assistant, Elton John (Samson Kayo). It is on Gus’ repair calls — mostly in the English countryside — that he employs his side gig as a YouTube ghost hunter, known as the Truth Seekers. That’s basically it.

I’ll ignore the fact that the tech they describe to fix Internet systems and get 100% UK coverage is total nonsense. And that the whole idea that generates the “ghost in the machine” thing is also completely confusing and also nonsense. And the fact that this Gus dude is supposed to be awesome at his job and the company’s best, but seems to mostly go on one call a day – and generally spends the whole time filming for his YouTube channel rather than doing his actual job. Because if he’s the best Smyle has, it seems maybe they kinda suck in general.

I’m trying to put into words what exactly it is that derails this show. I think, like Hot Fuzz, it’s the attempt to roll a fine, local story into a larger conspiracy. We have the funny little scenes between widower Gus and his live-in father-in-law, Malcolm McDowell. We have the mysterious background of Elton John and his relationship with his cos-playing, agoraphobic sister, Susan Wokoma. And the also mysterious appearance of the ghostly Emma D’Arcy character, Astrid. Getting to the bottom of these main characters’ relationships and backgrounds while they drive around in a van and solve mysteries should be enough. They could have essentially made a modern-day, YouTube Scooby Doo (minus the great dane). They built the infrastructure for this type of show, but instead of doing a case-of-the-week thing, they decided to completely over-engineer it and add in a larger conspiracy this is just plain stupid.

This begs the question: why does there always need to be a big bad? Why can’t it be enough to develop characters, have them go on weekly adventures and throw in some laughs and some scares? Why layer implausible cult-ish stuff on top of it? Why borrow from your own work, mashing up Hot Fuzz and The World’s End to create this cult/mind-control, world-ending thing that totally doesn’t need to be? The show has potential in its low stakes. In its quaintness. So rather than lean into the fact that it’s laughable that weird things are happening in the empty English countryside in which this show is filmed, they do the polar opposite and pose that the world could hinge on what’s going on in the same empty countryside. And I’m not here for it.