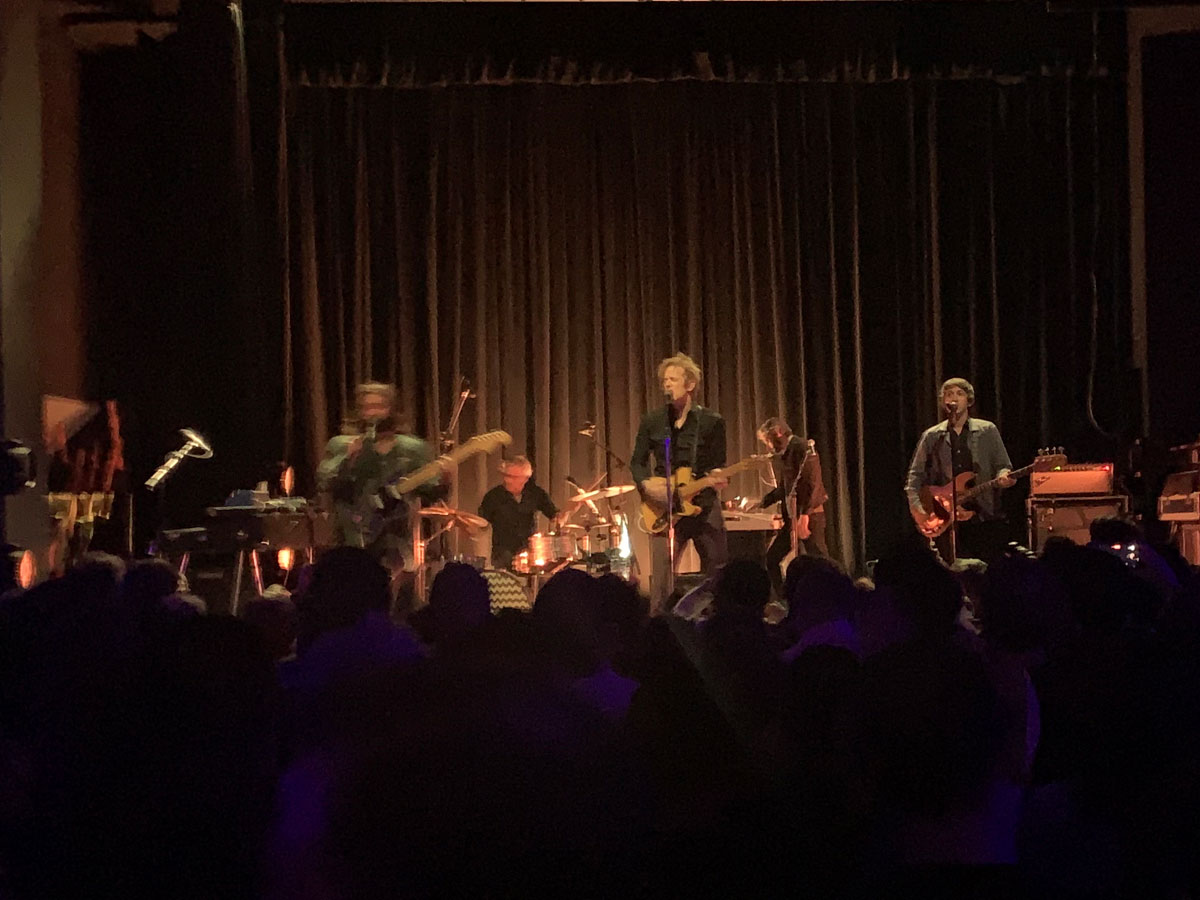 It’s always shocking to me how long Spoon has been around. They formed in 1993 and released their first album, Telephono, in 1996. That was 25 years ago, people! The original members of the band, Britt Daniel and Jim Eno are both older than me. That doesn’t happen that often these days. Granted, the last artist’s show I saw, Lou Barlow, is exactly Eno’s age. So, apparently I only see old-guy rock ‘n’ roll now. But my point is, we all know that Dinosaur Jr. has been around for a million years. We associate them with the 90s. But for some reason Spoon escapes that classification. They feel like a much newer, much more modern band. Not grouped in with the grunge or post-grunge crew. Not only because their music isn’t typical of that genre, but because they seemingly reinvent themselves every album or two and represent something more, uh, artistic than your typical guitar, drum and bass rock band.

So this was my latest foray into old-man concert viewing. And in New Jersey to boot! But this was like cool NJ, not lame NJ. If Jersey City can pass for cool. I’d never been to White Eagle Hall, but it’s a pretty rad venue if my first encounter is any measure. It’s an easy in/out, it’s a terrific size — somewhere right between the size of Bowery Ballroom and Irving Plaza — and the sound system and acoustics are terrific. It was originally built in 1910 as a Polish community center and has served multiple purposes over the years, including a bingo hall, basketball court and general performance space. It’s your typical hall setup, with a stage up front, open standing general admission floor space and a balcony above for fancy people. There are three bars, I think, and the 30-foot ceilings have a couple designed glass skylights that look like they belong in some Masonic temple or other. Overall, it was a great space. However, I’m not a tall person. I’m not short, now. But I’m also not tall. So when the 6’3″ dude with the world’s fattest head shuttled to his left, ending up directly in front of me, I was less than thrilled. Granted, I figured I was better off than the 4’10” adult woman to my right. She was hosed.

Here’s the thing about Spoon. They have amassed nine LPs, a handful of EPs and a bunch of b-sides over their existence. Which is an awesome thing when you’re making your Spoon mega-mix. But not so great when seeing a one-off show. And not an overly long show at that. Because inevitably they’ll play some of their favorite songs, but definitely not all of yours. You’ll be left wanting because they played some random track off a benefit album from 2003 that you’ve never heard or, as they did, a couple songs off a new album that isn’t set to be released until February of 2022 instead of “Lines In the Suit” from Girls Can Tell or “Metal Detektor” off Series of Sneaks. It’s not their fault, of course. And what tracks you want to hear is completely subjective. But they failed to play even a single song off their first three albums — my favorite three albums. But, look, they play a pretty standard set and relate to the audience in a pretty standard way. They’re more of a rhythmic band than a rip-roarin’ one. Sure, Daniels’ voice shreds a bit and his bandmates can crank up the distortion on occasion, but it’s really more about the groove than the overwhelming energy. There is no mosh pit at a Spoon show. After all, someone might break a hip.

This is not to say I didn’t enjoy the show. Quite the contrary. It was enjoyable. Daniel did a little banter, the band was tight, as expected, and they were the cool band you always get at a Spoon show. Granted, I think the last time I saw them was on September 21, 2002 at the Bowery Ballroom where John Vanderslice’s drummer at the time tried to steal the show as their opener by playing standing up and just being phenomenally entertaining. So even back then, they came off as a band that was phenomenal to listen to through a stereo or on headphones, but just not the most blazingly exciting band to watch live. I can’t quite put my finger on why, other than the fact that their seemingly simple — and sometimes incredibly sparse — music translates really well intellectually, but less so emotionally. Not that it’s heady or anything, but ultimately it’s this kind of genre-less rock music that is a bit insular and in its own head. Britt Daniels’ eclectic influences have managed to keep the band fresh for going on three decades by somehow continuing to bend and fold very similar songs in weird ways to make them sound different enough from each other to keep it going. It’s all the little things between the bouncing rhythms and staccato guitar strokes that make the songs interesting. And those are best observed in a more closed environment. Otherwise a lot of the stuff can end up sounding like a Prince, Kinks or Talking Heads song shot through a lens that turns it inside out, spindles and mutilates it, but ultimately shows itself to have the same fanboy DNA underneath it.

Ms. Hipster and I started talking about the band on the way to the show. Mostly discussing how we would describe them to friends who asked. And, frankly, it’s tough to say. The first couple albums were definitely straight-up indie rock. A term that doesn’t really mean much of anything, but at least it’s one of those things that people can kind of hear in their heads and/or tell you definitively if that “type” of music isn’t their thing. But I feel like Spoon, despite being really hard to nail down, would appeal to a pretty wide range of music lovers. Not only their albums, but their live show as well. After all, they aren’t overly loud. Or challenging to the ear. They don’t do any untoward theatrics and don’t traffic in bro-ish misogyny or anything like that. They’re pretty non-controversial. So why aren’t they Pearl Jam? Why aren’t they the Chili Peppers? Or even Wilco? Well, because they’re still an indie band. They’re on Merge and Matador. And though they had a relatively well-documented, two-second dalliance with Elektra very early on, they have spent their career as musical underdogs. Granted, they are the indie version of these bands above. World’s tallest midget, I know. But they are an incredibly successful indie band. Which means there is a popularity ceiling on their music. It can only get so big. Their sphere of influence and reach can only be so wide. So it is on those of us who are inside the bubble to reach outside of it to the uneducated. To the uninitiated. Because Spoon is a band, both recorded and live, who would appeal to that neighbor of yours who is clearly indie-curious. Just tell her they influenced that Lewis Capaldi kid or something.