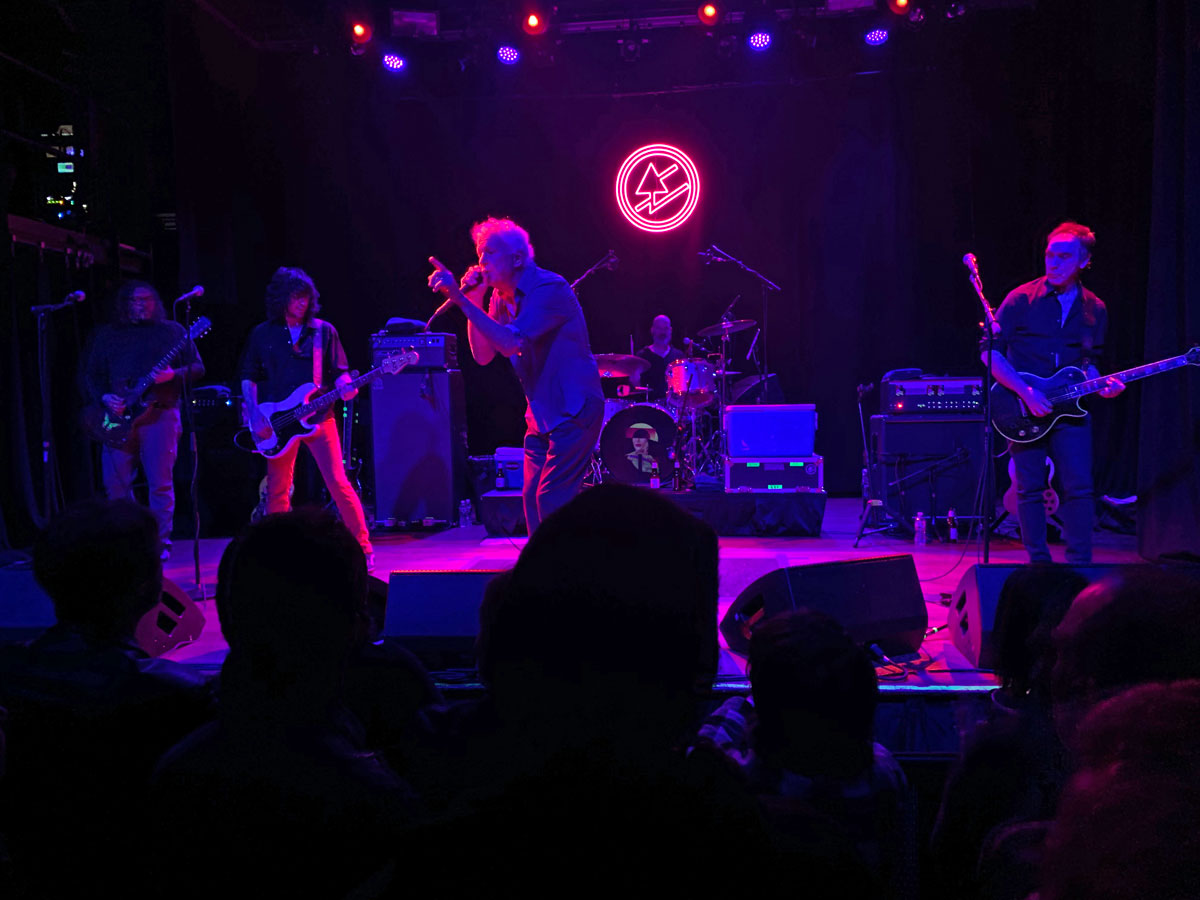 It’s fair to say that Robert Pollard is not a young man. In fact, the kids would say he’s a straight boomer. And, yes, visually, he may look and dress all of his 64 years, but once Guided by Voices kicks in and the Miller Lites (and a mysterious bottle of communal booze) starts flowing, Pollard is the same dude we saw play back in the 90s. His high kicks may not be as high, and his mic twirls as acrobatic — or as frequent — but the incredible energy, stamina and good humor of one of our longest running true rock bands is still on dazzling display. So say my ringing ears after an almost three-hour, 56-song assault from up close in a perfect venue for their throw-back, true rock ‘n’ roll fun.

Ms. Hipster made a great point. Guided by Voices is a true rock band. She’s a Pearl Jam fan, but has admittedly been disappointed and relatively unengaged with their “new” music since that self-titled, avocado album in 2006. Mainly because they’ve forgotten how to write a straight-ahead, rip-roarin’ rock song. She goes to their live shows because they play that pre-’06 stuff and the fans are reminded of a band that once was. Before they got comfy, and apparently started writing world music, or whatever PJ has been doing for the past fifteen years. On the other hand, Pollard and GbV have never changed the formula. Pollard continues to write rock songs with drums, two guitars and a bass. Tons and tons of songs. His incredible output — between GbV, his solo stuff, and even his three-album Ricked Wicky dalliance in 2014 — is monumental. And the approach and quality has rarely waned. Admittedly, my ability to keep up with his oeuvre has been inconsistent since about 2013, but this live show has re-opened my eyes and interest in digging back in to see what I’ve been missing.

This is all despite the fact the band’s drummer, since Pollard broke up and then reconstituted the band in 2016, is one Kevin March. General Manager of our local School of Rock (for which both Hipster Jr. and Hipster Jr. Jr. have played shows) and on-again, off-again drum instructor for the one and only Ms. Hipster. I first met him at SoR back when he was brought back into the fold during the fallow Ricked Wicky sidetrack, but he’s the most down-to-earth dude you’ll ever meet. And the giant smile on his face during this show — and his consistent ability to absolutely punish the drums — were testament to his joy in being back playing live after being furloughed during the rise and fall of COVID.

The crowd, not surprisingly, looked just like you might expect. Lots of dudes. Lots of older dudes. Some younger dudes. And a bunch of dudes there alone, probably with wives at home happy to have the night off to read a book or catch up on Vikings or something. There was less air drumming than you might expect, though there was still some. And, weirdly, Bob Pollard did quite a bit of air guitaring. And playing with his pants. Remember, he’s an older gentleman. Wearing slacks. And drinking. A lot. Which seemingly leads old men to fish in their pockets a whole bunch.

Maybe it was the freedom of finally being on the precipice of the lifting the mask mandate. Or just leaving their apartments and houses and being infused with some blisteringly loud rock tunes. But people were chugging those $17 beers like they were… Well, like they were $5 beers. And then, at some point — in fact right when GbV launched into their eighth song, “Cut-Out Witch” — things kind of went into overdrive. Some of those very expensive brews flew in the air. Some poured down my back. Later some asshat threw a can up on stage. But, surprisingly, the “moshing” started. As captured in my video below. You can see the exact instant when the Russian-mobster-looking blockhead in a puffy jacket plowed into me and I had to take evasive and pushy actions to remedy, uh, him. The video was abruptly abandoned in favor of protecting my face. And phone.

Did I mention they played 56 songs? In the era of two opening bands and maybe an hour and a half of a headliner if you’re lucky, the old-ass dudes played twice that long with no openers. I suppose you can do that, of course, when you have 140 albums. That’s probably not a real number, but it’s the number Pollard threw out there. And it’s probably close. He also started to pontificate on the history of the band and the labels they’ve been signed to. He apparently loves Matador. I mean, who doesn’t? But had a lot to say about the now-defunct label, TVT. And the more he drank, the more he talked. TVT apparently wanted him — at 40 years old — to write songs about cars and girls. Thus “Chasing Heather Crazy.” They wanted hits, so he tried to give them hits, godammit. But did they know who they were signing? And did they know that having Ric Ocasek of The Cars produce Do the Collapse would make the fanbase want to light themselves on fire? And that they would battle with Bob about calling “Teenage FBI” “Teenage FBI (Someone Tell Me Why)?” They did not. And, from what I understand, Bob is not to be trifled with.

The whole thing did feel a little sloppy by the end. But not in a bad way. More like in a 90s way. When dudes in painters caps would drink way too much and bro hug and point at the stage and stagger around and generally be idiots. The kids these days don’t know much about that. But us olds do. Pollard, despite awkwardly slurring during his asides, kept his shit together and sang just fine. I think. The band was obviously awesome and not at all matching Bob’s lack of sobriety. The audience, however, thought for some reason they had to match him. It was entertaining. Truly. To see people out enjoying themselves, listening to an excellent rock band play excellent rock songs on a nice night on the tail end of a pandemic. There’s no place I’d rather be. Though I’m still at a loss why someone would spend that much on a drink only to throw it in the air. Also, when did weed start to smell so terrible? I honestly might have to burn the shirt I was wearing. Still worth it.