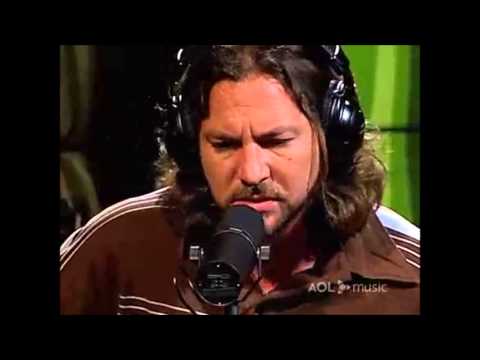 As much as I’ve tried to let Pearl Jam go as part of the grunge ghost that was my college career, they always manage to find a way back into my heart. That 3/4 time swagger (despite being co-opted by inferior bands like, most famously, The Goo Goo Dolls) just socks me in the gut like no indie rock band quite can. It’s no wonder the first minute of the band’s second song, “Corduroy,” had me welling up like, well, the tour nerd standing next to me. There’s something about that song, and a giant arena filled with fist-pumping Gen-Xers that captures the spirit of rock and roll in a way that no sweater and tortoise shell Brooklyn-band-of-the-moment show at the Bowery Ballroom can. Not to discount my bread and butter, but the sheer geek frenzy of the PJ crowd, mixed with the nostalgic blow of Eddie’s mumbling wail sets something off in me that makes me want to high-five fanclub member #163,836 from Scranton, PA. I refrain, of course, because my hipster card is already in jeopardy by just stepping foot in the Continental Airlines Arena parking lot. 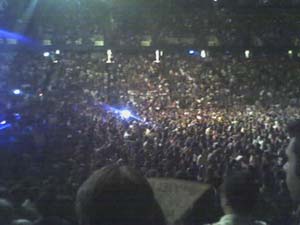 So this guy and his buddy were real fans. Such fans, in fact, that the one guy had cataloged in his head every song he had ever seen played live, and only had a couple more to check off before he could retire from touring with the band (and, presumably stick just to his home state and surrounding areas). The fact that The Office is set in Scranton was not lost on me, as I got the true sense that Chilis might honestly be the social hub of the community. Like fan #163,836, the crowd was freakishly caucasian, and remarkably old on the whole. Not that I should have expected anything different. In fact, co-workers have reacted with mixed skepticism before the last couple of shows I’ve seen (I basically see one show per album), as to whether the band still existed (one even asking if it was a reunion tour). They were under the impression the band put out “Jeremy” when they were in eighth grade and promptly gave up careers in music. Silly kids.

Although nothing made me feel as old as my recent Pearl Jamwork experience, watching the AOL Music Sessions session with PJ in a room filled with the music team. Eddie started singing ”Gone” solo with his guitar, and I looked around the room we affectionately call ”The Death Star” to see a bunch of confused and/or scoffing young faces all but laughing at this old, doddering fool grumbling incoherently about Bush or love or bugs or whatever. It’s grunge, dammit! Geez, thank god the next band they showed was the savior of rock and roll, All-American Rejects. That reminds me of this one time back when KRock still played music; Julie Slater was giving away tickets to the 92nd caller, and that person had a choice of concert tickets between Creed and Pearl Jam. Of course the idiot child who won chose the Creed tickets, to which Slater said, “Really?” The caller went on to say how much Pearl Jam sucked and how great Creed is. That argument is like saying, to a lesser extent, of course, that the Beatles suck and Beatlemania is where it’s at!

All I know is that it’s almost impossible not to geek out when faced with one of the stronger molding forces of your drunken coming-of-age. If my college life weren’t filled with grungy basement frat parties and beer-soaked life-affirming mosh pits, I don’t know what kind of person I would be today. I’m sure my liver would be more healthy, and my eardrums a little more intact, but I would never know the joy of sheer testosterone-laden dorkiness. Just ask the giant Jersey meathead sitting in front of me who pointed at Vedder several times during the show and screamed “I love you!” before turning to hug his male companion for the forty-seventh time since they took the stage. Now that’s powerful stuff.