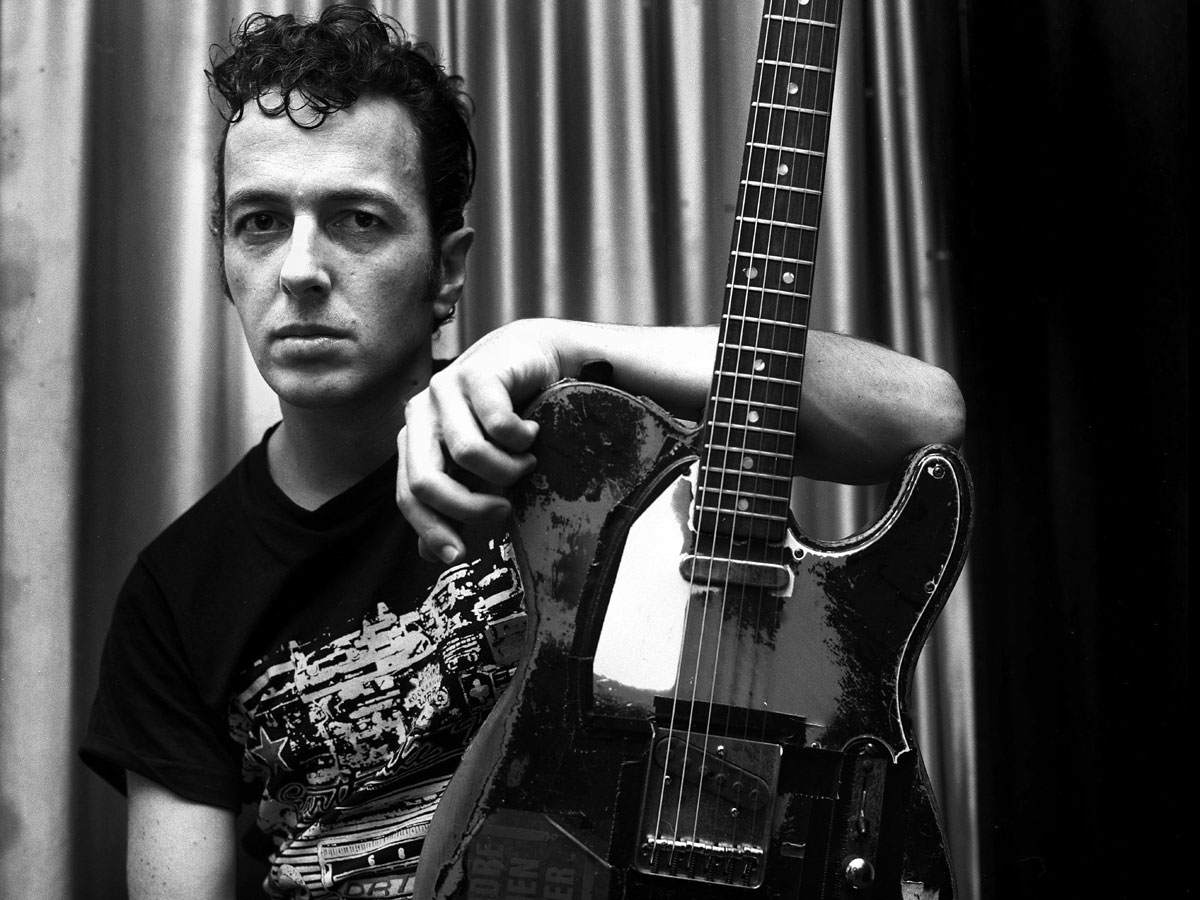 So I went to the Joe Strummer tribute show at Irving Plaza a few weeks ago. I’m not really sure why other than it seemed like something to do on a Monday night that didn’t involve standing in a bar and drinking many beers. As it turned out, that did happen, but that’s another story. For those of you out there cuddled up with your Dave Matthews and Big Head Todd CD’s, Joe Strummer was the frontman of The Clash, one of the most influential rock bands of all time. Strummer died at the end of 2002 at the age of 50 of a sudden heart attack and the rock world mourned. 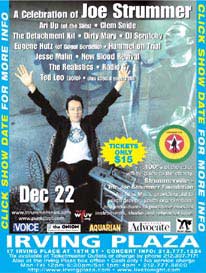 Now a bunch of Brooklyn and Brooklyn-signed bands got together and decided to cover some Clash songs and Strummer solo stuff and bring the whole love fest to Irving Plaza. Apparently there have been a bunch of these across the country. These shows raise money for some charity or other, but this is not often the point of these things. While I certainly can’t claim to be an aficionado on the band or the man, I own all The Clash stuff and remember dancing to some Big Audio Dynamite song at an eighth grade dance way back when.

The first thing I noticed was the age of the crowd. I often go to shows where the kiddies are few and far between, but this bunch made me feel like a toddler. Some of them saw their best days in the late seventies and peaked with the advent of the Members Only jacket. Little groups of balding men milled around and talked about their punk days over cans of Bud and nicotine stained fingernails. I felt like I was crashing the party–until I remembered that the bands that were going to be on stage were of mygeneration and they were the ones I was here to see.

Things started off calm, and then The Detachment Kit came on. I have to say, unfortunately, this was the one band I was really psyched to see. Their album, They Raging. Quiet Army., is one of my favorites and certainly seems like it would be impressive live. I would live to regret my enthusiasm. The band takes the stage, and the lead singer, Ian Menard, has a white sheet of paper taped to the mic stand. I could hear murmurs from the crowd. I wasn’t quite sure what the hubbub was about. They played a second song of their own without incident, but in between the second and third song he says something to the effect of, “Um, it sucks that Joe Strummer is a dead guy, but it’s great that he made music.” I cringed–and then the death nail: a second sheet comes up and is taped to his mic. The band starts in with Spanish Bombs and the cans of beer start flying. The lead singer, reading the lyrics directly off the sheet, ducks a flying can of Bud Light that hits the stage with a thump. A second full can hits the drum kit square, another skidding off the drummer’s crash cymbal. Suddenly, and without warning, a stocky, bald man in his forties jumps onto the stage, gets Mr. Menard in a semi-headlock and begins to punch him in the face.

Now I’m slightly clueless, but I still couldn’t figure out why this guy is socking one of the artists in the head. A couple roadies run out from the wings, security jumps up on stage and the drummer leaps over his kit to join the melee. In the process the guitarist broke a string, which stuck out from his instrument like some crazy whisker and the drunk puncher was shoved off the stage by security. Meanwhile, the drummer stood at the front of the stage taunting the crowd screaming “C’mon motherfuckers” (or something) and had several more beers winged at his head. The guitarist stood around looking dazed and confused. The video screen and curtains finally came down with the drummer still asking for all comers. We never got to hear the end of Spanish Bombs. Still not sure what the hell was going on, I was clued in by those patrons around me who said he got what was coming to him by disrespecting the memory of Joe and making light of the guy’s work. I guess they don’t understand the punk aesthetic–snottiness is expected.

So I see poor Ian hanging out later on, sheepishly hiding his coat rack-like frame in the corner of the merch table. The guy is six-foot-something and couldn’t weigh more than a buck twenty. He looked genuinely embarrassed. I guess he knows not to fuck with drunk old men anymore. The rest of the evening was much less eventful, and it seemed like several of the bands cut their sets short. I guess they were afraid to perform anything that wasn’t 100% spot-on. The guy from Clem Snide did play the banjo with his teeth and some crazy-ass Ukrainian guy from a band called Gogol Bordello played the guitar until his fingers bled. He actually got the biggest ovation of the night. Yeah, blood!

It’s nice to see people get passionate about music, but what ever happened to spitting and giving the finger? Or is that what you do when you like the band?