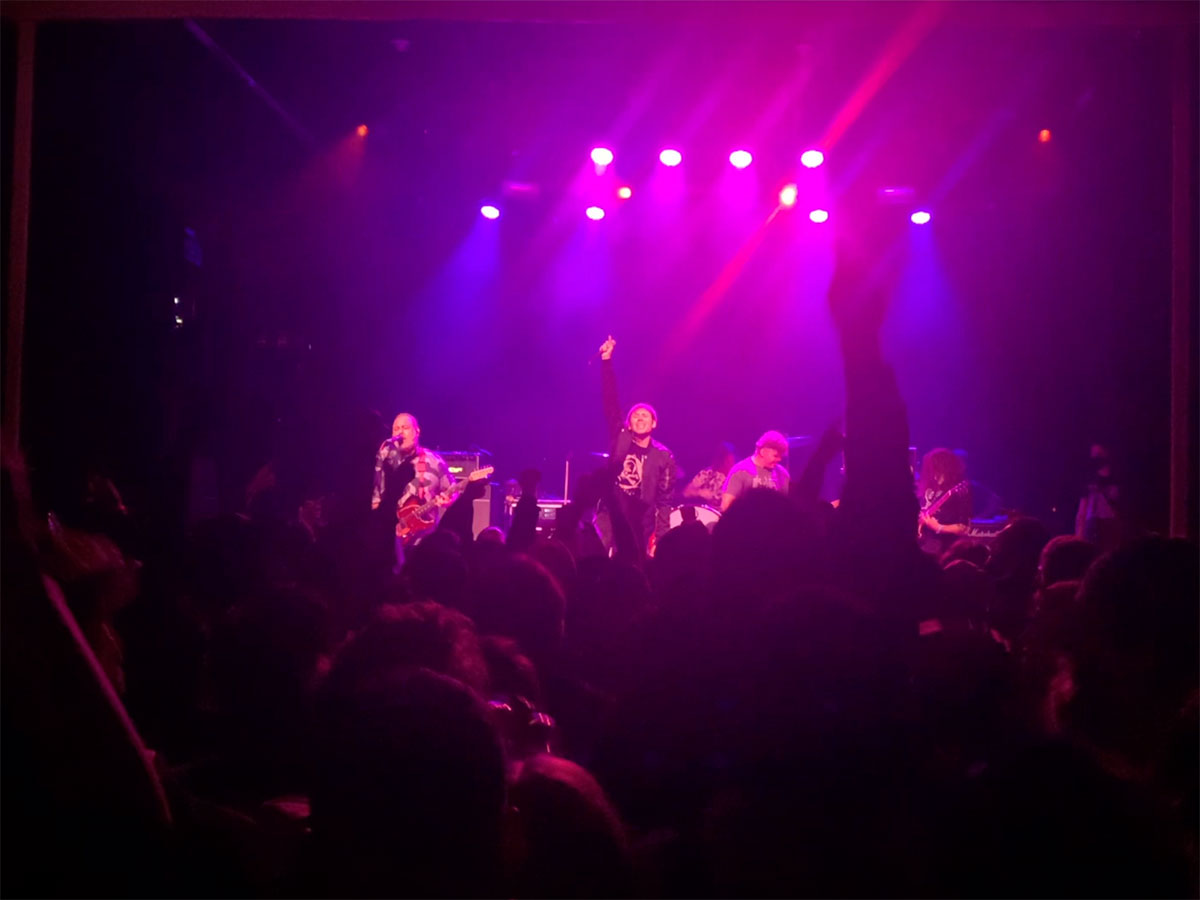 Man, I’m pretty sure the last time I was at Irving Plaza was in 2003 for a Joe Strummer Tribute Show. That’s a long-ass time ago. In fact, after going there for years between 1995 and that show, I’m not even sure I knew the joint was still open. But here I found myself (along with Ms. Hipster) shoulder to shoulder with 1,200 vaccinated, but totally possibly COVID-spreading fans of early 2000s emo/screamo bands who also maybe just realized their formerly favorite venue from the 90s was still alive and kicking.

So, here’s the issue in the time of COVID: the bands get tested right before they go on stage. I mean, that’s a good thing. But it’s also sucky if you came to see a show with a full band. And this became evident when Christopher Crisci of The Appleseed Cast walked out on stage alone. Our luck, he’s the lead singer and songwriter and not like the bassist or something. Can you imagine? So the dude gets up there and essentially does a solo show because all his bandmates tested positive right before walking out. Or however long a rapid test takes, I guess. He did an admirable job.

Next came Cursive. Who, miraculously, had their whole band. It would be the first — and last — of the night. And, frankly, I would have been happy if they were the headliner. It’s not that I don’t enjoy some of Thursday’s music, but Cursive is a band I actually like. And, dude, Tim Kasher is an entertaining weirdo. I have no idea if the guy does drugs — and I’m no expert at recognizing drug use — but he certainly comes across as a man who loves stimulants. His voice sounds like it’s been through 50 ringers and makes the perfect pairing with the band’s discordant musical stylings. I’m a shitty guitar player and have sent my teacher a couple Cursive songs to learn. Both times he’s come back and been like “Uh, that’s a tough one; it’s just a bunch of weird stuff that I can’t really write down per se.” Accurate. But the band, with their start-stop drumming, horns, great energy and a fucking cello just blew me away. It almost made me happy enough to ignore the fact the dude with the bad unudercut next to us kept asking one of the other concert-goers to continuously take his photo while he made dumb faces for his Grinder profile pic.


And then the waiting started. Some dudes who weren’t Thursday played around with a MacBook Pro on the stage. It seemed like perhaps they had the wrong cable? And we stood. My $18 beer was gone. My old-ass feet started to hurt. And the dude with the giraffe neck and man-bun had sidled into my sightline. Which reminded me what I never loved about Irving Plaza, after mostly going to Bowery Ballroom and, even better, Mercury Lounge for the past two decades. While I watched the time tick away (and watched the energy drain from Ms. Hipster’s eyes), I had the opportunity to look around. The audience was not surprising. Though, I suppose I was expecting it to trend a little older than it did. I guess, with my last two recent shows being Spoon and Lou Barlow — both of which involve singers who are actually older than me — I was used to seeing more gray hair, flannel and paunch. Because those are both artists that technically started in the early 90s and mid-80s respectively. So there is at least a decade between their audiences, give or take. Which made sense given this mostly-30s crowd. Thing is, I had no idea coming in who Thursday’s fans are. Despite dedicating a large chunk of my 2003 building their absolutely insane flash site for War All the Time. I’ve heard the first 30 seconds of every track on that album at least 1000 times (you’ll get this reference if you browsed music sites back in the early 2000s and recall autoplay).

And then we kind of realized why the band took an eternity to come play for us. Besides the wonky laptop. They too had been hit by the COVID testing bug (so to speak). From what I could tell, they took the stage with three of their six members. Lead singer, Geoff Rickly, launched into an explanation about how their guitar tech was going to play the drums. And some dude from one of the opening bands was going to play guitar. And then maybe some other guy playing the bass? Honestly, I only know what Geoff looks like, so he could have trotted out a bunch of circus clowns and I wouldn’t have known the difference. Whatever the case, Rickly said they were going back to their roots and playing something that would probably sound more like one of their old New Brunswick basement shows than anything since. Again, I’m not sure — having never heard them live — if I would have noticed. Though the second scream-o singer seemed to be absent, which was a bit of a disappointment. Because who doesn’t love layered screaming? No, seriously.


And then they hit that first chord and the place erupted. Ms. Hipster and I were instantaneously thrown forward by an onrushing crowd, which soon spiraled into a mosh pit. Albeit a relatively tame one, most likely full of a bunch of ad agency art directors and dudes who do ad sales for The New York Times. We did kind of have to fight our way out of the wash, though. Ms. Hipster can certainly hold her own, and I saw her man-handle a couple dudes eager to shove whomever they could get to. For my part, I managed to forearm shiver some dude who hit me pretty hard from the left. I instantly felt bad as I watched him and his crazy Doc Brown white hair sprawl and land on the floor. I’d just killed a senior citizen! But the dude, without so much as a backward glance, picked himself up and scrambled into the swirling maw. Now, safely out of the agro pushfest, we managed to take in a few songs before my pumpkin alarm went off and the siren call of the NJ transit train reached our ears. After all, we were a couple Gen Xers with jobs who dared go check out Thursday on a Wednesday. Had they not had that little hour-long pause, we would have been golden, but that sapped energy and ran out the clock. So we bailed after a bit. Although I’m sure the show would have been cool, and I really would have liked to have heard “Understanding In a Car Crash” and “War All of the Time.” Ah, well. Maybe they’ll play a basement show in NJ soon and I can just hit them up there. Probably not.

So it was with a stomach a little less filled with a Pete’s Tavern burger and regret, once again, that I didn’t put in the ear plugs I brought that we headed out into the freezing-ass night. I miss live music. I miss communing with my fellow humans. Even if some of them are too tall. And others shove me in the back with no forewarning so they can pretend to knock into each other in some juvenile show of dominance. And others who smoke raunchy weed and the couple initially in front of us who wore camel-colored cashmere coats and looked as if they we out to enjoy a night at the Yale Club. They’re all my people, I suppose. And we’re all brothers and sisters in rock ‘n’ roll. Even on a weeknight.