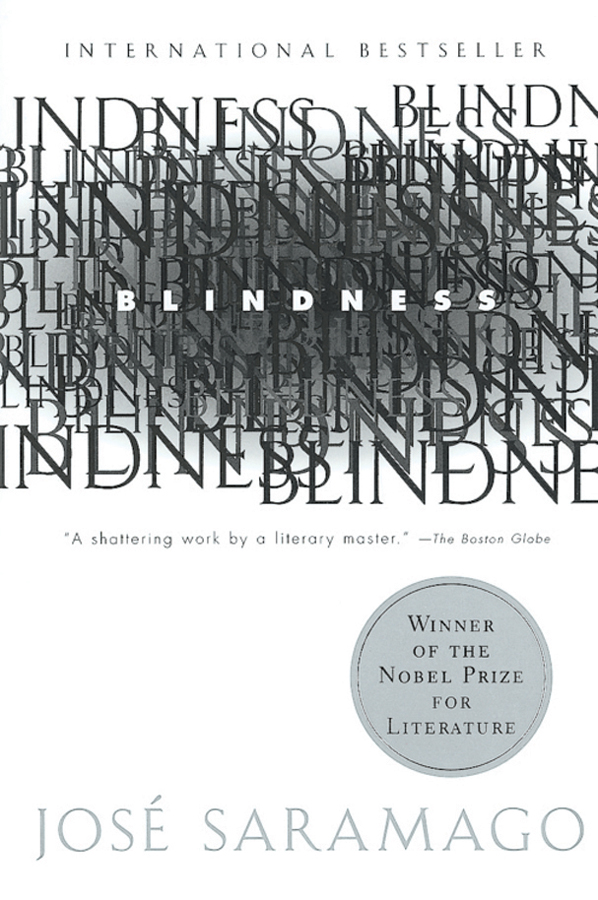 I must admit that I first became aware of this book because of the movie whose commercials reminded me of Children of Men. Granted, I didn’t end up really lovin’ that movie, but I did really like the idea behind it. Likewise, the plot of this seemed allegorical and sci-fi enough to fly. I didn’t up seeing Blindness in the theaters, but in looking for new books to buy, I came across the novel, which, to my surprise won the Nobel Prize for literature (or, more properly, its author)!

I swear I had been up and down the National Book Award and Nobel lists a million times, and don’t recall this guy. I must have dismissed him outright at some point because he writes in Portuguese. Yeah, I definitely had a bias against translated novels at some point in my life. I’m not sure why, but my ethnocentrism seems to have mostly evaporated. Mostly.

Taking place in some city in some unnamed country (but presumably somewhere akin to Lisbon), all of a sudden people start going blind. We first encounter patient zero as he sits stunned at a traffic light, a bright white light invading his field of vision, plunging him not into darkness, but into a world of never-ending whiteness. He is helped home by a stranger who promptly steals his car. This patient zero ultimately goes to the eye doctor, who can’t figure out what’s up. And then the doctor goes blind, along with every patient in the doctor’s office over the next couple days. They all find themselves, along with some others, thrown into an old mental hospital by the army.

And so begins the tale that is so familiar to us all about the end of the world–or what we can only assume is the end of the world. Of course we have no concept if the blindness exists outside of this small-ish group, as they are sequestered away from the rest of the world. Yet another pretty common plot device, but interesting in the microcosm it creates. We see the world within the asylum grow and morph and eventually devolve into chaos and depravity. The interesting plot twist, of course, is that amongst the blind is one woman who can see. She is immune to the disease for reasons we never really find out, but keeps this fact a secret throughout her time in the asylum.

Eventually the army piles more internees into the hospital to quarantine them from society. Then things start getting completely out of control when the food dries up, as one wing full of men hordes the rations and starts demanding the women from the other wings as payment. There’s some stabbing and burning and things basically go to hell. Ultimately we find out the army has gone, and that the world beyond the hospital has also gone blind. The book turns into a mini-version of 12 Monkeys, Outbreak, Night of the Comet, I Am Legend, and The Road–pick your poison. Everyone is starving, and everyone is blind. Except our one woman, of course. It’s a bizarrely frustrating feeling. We basically see our little group wander around for the rest of the book trying to get back to their apartments and eat, and, well, that’s it.

The book had very good potential, and while its author did win a Nobel Prize, I didn’t find it the most artful thing in the world. Maybe something was lost in the translation (after all, there’s a note that the translator died part way through his work), but there were some sections that were pretty flat and repetitive. The whole book is told in a weird kind of voice that is almost part omniscient narrator and part reporter. It’s unclear whose voice we’re really hearing, as the shifts are sometimes jarring when the author lapses into commentary that seems really out of place in the context of the apocalyptic tale. There’s also a lot of reference to defecation, filth and general muck. I suppose it would be a pretty stinky world when there’s no running water and nobody can see where he or she’s pooping, or has a change of clothing. I’m not sure it’s all the crap, but the book tends to bog down in weird details that really give away the fact this thing wasn’t written by a native English speaker — or at least a North American. I can’t really describe it, but there’s a fixation in the book that is particularly European (non-UK Europe). Ultimately, I’m just not sure what the point of this thing was, but perhaps it’s because I am an ethnocentric American and don’t get the whole politics and history of the thing.