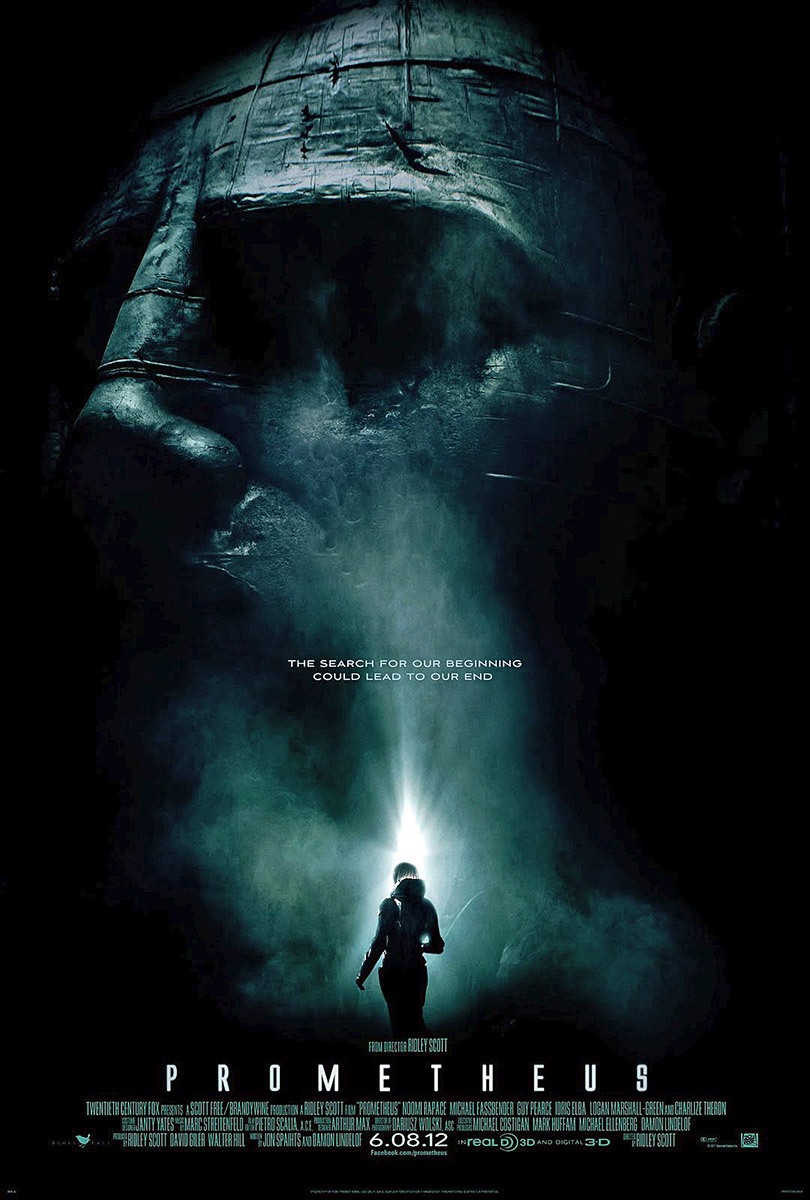 So we have this great title, a kernel of an idea and think the trailer could be really cool! That’s great, Mr. Scott, but is there a movie in there somewhere? Well, don’t worry about that. We’ll throw a bunch of generic characters in there that we’ve cobbled together from the Alien movies, maybe some stilted dialogue and a convoluted smattering of creatures that can hopefully cover up the fact there really is no plot whatsoever. Will it cost a lot? Yes. Will it make a ton of money opening weekend? Hell yes. Awesome, let’s do it!

And that, I think, was the extent of the thought put into this movie. Ok, maybe they sat down at lunch at The Ivy and sketched out the alien lifecycle, such as it was, on a cloth napkin or parking stub. It’s such a fucking shame, though, as I was sucked in by the trailer and that bizarre screaming noise it featured, and the fact this thing promised by its title to be deep and prophetic in a way. It turned out to be neither deep nor prophetic. Instead, it turned into one of those instances where they shot their wad right at the beginning of the movie, getting the “deep” part out of the way, and then it just petered out into just another stupid monster movie. With the very end of the movie I’m sure playing to what Scott imagined to be a packed, opening night theater full of Alien fans who would just go apeshit over his cleverness. Of course, that same ending he threw in there, after having to sit through an hour and half of creature chases, resulted in mainly groans from the $20-a-seat IMAX audience in which I sat.

I’m honestly at a bit of loss as to how to review this movie without riddling the thing with spoilers. There’s just so much to say about it, but most of those comments revolve around the ridiculousness of the alien origin story and why/how it makes no sense. Screw it, here are some non-spoilers to begin with. Why, oh why, do they hire young actors to play old characters and think we’re going to be okay with covering them with rubber prosthetics instead of just getting old men to play old men? Guy Pearce, playing the ancient industrialist who funds the Prometheus exploration (sound familiar, Avatar fans?), ends up looking like the Six Flags guy, and is completely distracting in his absurd makeup. As mentioned above, there are characters in the story that serve little to no purpose, and unlike some of the memorable characters from Aliens, might as well have been cardboard cutouts with targets on their chests. The only positive thing I can say is that at least the black dude wasn’t the first guy to die. Even our main character, who, once again, turns out to be a woman who at first seems relatively delicate, but turns out to be tough as nails, is about as interesting as a bag of alien guts. I’m not certain why they chose the Dragon Tattoo actress, either, as I understand she had to learn a good deal of English for the role and was certainly limited in her acting range (at least in English), and because of her uneven skin, the thick makeup she wore was super-evident when the high def cameras kept getting macro close-ups of her rather oddball face. Breaking the fourth wall, whether it was Guy’s terrible makeup, or Noomi’s pancake-y stuff you’d figure a guy with as much experience as Ridley Scott would at least fix that shite in post. Am I right people?

So the plot here is simple: it’s the future and two archeologist types find an ancient cave painting in which some humanoid is looking at a few round objects in the sky. That cave painting, along with a bunch of other ancient pieces they’ve unearthed over the centuries, seem to point to the same conclusion that an ancient civilization of some sort is inviting humans to come to a far away solar system to visit. Looking at the painting, I have no idea how they concluded that, or how a few circles points to a specific planet, but that’s just one of the major plot holes that went unfilled. Anyway, some old rich dude gets wind of this and puts together a team on a ship named Prometheus (obviously an ode to the Greek Titan’s story) to go seek out this planet. The assumption here is that whatever or whomever lives on this planet is our ancient ancestor and/or may somehow point to our origins as human beings. An interesting plot device to be sure, but set upon a really shaky base. So they, the small crew comprised of the two archeologists, a punk rock geologist, a doctor and a creepy android, who is amazingly similar to Bishop from Aliens (along with some other folks), land on the planet. And wackiness ensues. They discover the head of a giant human type thing that looks exactly like Powder or the observers from Fringe, which explodes for no apparent reason. There’s also this completely contrived 3D alien security camera thing that turns on it playback function mysteriously whenever there is a need for explanation in the film and the makers aren’t smart enough to figure out another way to get it done. Very transparently lame. And then the various creatures start up. There’s a thing that looks just like the monster from the trash compactor from Star Wars that goes down dudes’ throats. I’m not certain what happens when you get one of these in your gullet, but apparently the acid from one of these things turns you into a bizarre grasshopper monkey-like killing machine if you’re human. There’s also black ooze that either kills you if you’re a giant white guy, turns you into a zombie with a stomach ache if you’re a male human (but allows you impregnate female humans with baby octopi) and apparently impregnates you with that same baby octopus if you’re a female human. I think. Then there’s the baby octopus that grows within female humans and turns into a giant octopus overnight and can then apparently itself impregnate one of the giant white guys with something that I won’t spoil here. There are also some worms that are either the baby trash monster eel things or maybe they’re something completely unrelated. The point here is that none of it is clear what turns into what, who is needed to propagate what species and ultimately doesn’t answer the question of where the hell we come from, what killed the big white dudes and why the hell, if they supposedly created us, why they hate us so damn much. Perhaps when they put out the director’s cut, some of the film that connected these disparate parts will be added back in to better explain. Perhaps not.

Yes, there were a couple cool things to look at, but besides Charlize Theron prancing around in a skin tight body suit the whole movie (which seems to be the only point of her character), even the scenery wasn’t all that great. You’d think at least they would have gotten that part right. So, in conclusion, you have a nonsensical plot, characters that serve no purpose and go nowhere, surprisingly rookie directing errors, preposterous situations (lifting a dead body minutes after having major abdominal surgery, anyone?), dialogue straight from the George Lucas school of awkward lameness, an attempt to interject spirituality/religion that falls completely flat and an origin story that may or may not have been concepted by a spastic twelve-year-old. Sounds awesome, right?