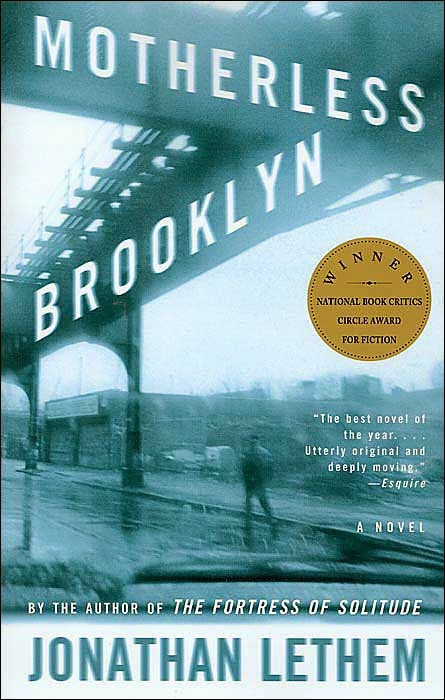 It’s as if my subconscious didn’t want me to finish this one. I was about three-quarters of the way through when I left it on a bus on the way home. Never expecting to see it again, I started on a new novel and put it out of my mind. And then my anal nature got the best of me… I called the bus joint just to check, and lo and behold; they had it. I do have to say that getting back into the story was relatively easy, as the characters were pretty clear cut, and the narrative linear and pretty typical. It wasn’t what I was expecting after reading The Fortress of Solitude. This one was quirky and relatively fun, but quite a but lighter than Fortress. Based around the main character, Lionel Essrog, whose Tourette’s is almost the main character itself, the story follows him and a small group of his fellow Brooklyn orphans who have been adopted into a street-level petty crime organization by Frank Minna, who turns into a mentor of sorts of all of them. Eventually they graduate into adulthood, and from petty crime into the detective business. Legit or not, they follow Frank to the ends of Earth until he is killed during one of their missions. They must then become real detectives to help uncover the mystery of his murder. Lionel’s Tourretic and OCDish behavior drives the plot forward, adding good touches of humor throughout, but also presenting a completely different way of approaching what would otherwise be a pretty blah mystery story. I swear the ticks were so well integrated into the story that there were times where I felt like I was catching some of Lionel’s syndrome. So in terms of the actual storyline, it did move forward briskly, and was compelling in the way a midrange John Grisham novel might be, but it was the Lionel character that really separated it from the genre. It was hard to know how to feel about the guy, as he seemed aware of his condition and how it might affect others, but was unwilling to curb his behavior. Despite his bizarre obsessiveness, he is one of the more sympathetic characters I’ve seen of late, and is certainly one of those characters every actor would kill to play in the screen adaptation (although it looks like Ed Norton will get the chance). It’ll be interesting to read Lethem’s next novel to see if he continues in the Fortress way, or kind of sticks with something like this Chabon-like story-based character study.