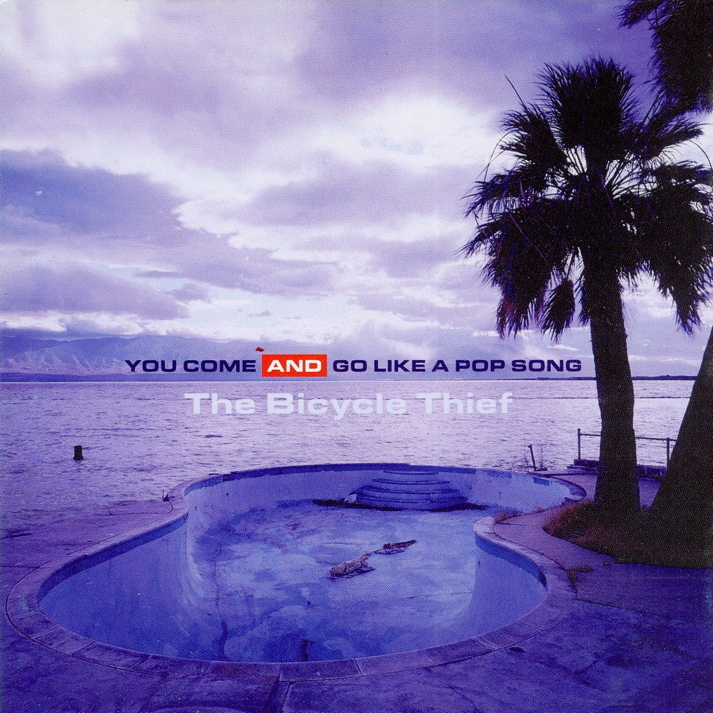 The Bicycle Thief: You Come and Go Like a Pop Song

It feels like just about everything from 2001 that wasn’t 9/11 was lost to history, including this album. Not that having Bob Forrest from one of my 80s touchstones, Thelonious Monster, at the top of the ticket is exactly going to set the world on fire, but add in future Red Hot Chili Peppers guitarist, John Klinghoffer and some random-ass dude from the Geraldine Fibbers and you have something that pretty much like thirty-three dudes on the planet might care about. Now that I’m reading more closely, this album originally debuted in 1999 (with the 2001 release being an updated version of some sort), so maybe it just got lost in all the Y2k hysteria and Prince idolatry. In any case, I feel like if the Internet had just been a scosche better back then, I would have discovered it. Must have let my CMJ subscription expire or not checked out whatever that week.

Thing is, I can’t really remember what rock music was doing back in 1999 besides sucking, most likely. I mean I could Google it and probably find a slew of records I enjoyed from that year, but this one wasn’t among them. I imagine there wasn’t a giant scramble for the latest Bob Forrest output at the time, especially since he, as a professional, had transitioned from a sort-of Los Angeles cult celebrity in the alternative rock scene to the dude who would eventually be Dr. Drew’s sidekick on Celebrity Rehab and personal sobriety coach for Anthony Kiedis. His voice — something I really associate with my high school music life — is something akin to an old swinging gate or inevitable brake pad failure and is one of those personal things that can either delight or annoy depending on your perspective. Whatever the case, it’s certainly unique.

Thing is, Thelonious Monster was a bit of an anomaly. On the one hand they were kind of a jokey band. They did some goofy shit, which I attribute to Forrest’s heavy cocaine usage. But then they also had these weepy songs that really outlined what would eventually become the kind of folksy emo movement, which I imagine was when he was having a heavy smack day. Like enough so that perhaps Forrest should apologize now for Dashboard Confessional and later-day, acoustic Get Up Kids. The Bicycle Thief follows in that same vain. Forrest careens from almost pseudo-hip hop/Sublime beats when he’s feeling spunky and goofy (though now there’s no coke to blame) and then the woe-is-me emo stuff that revolves almost exclusively around his former drug use and how he completely fucked up his life (and his teeth) going down that hole. Thing is, it can feel at times like he’s telling a story of a life that we all know he wasn’t heading toward. The guy, even at his best, was a local phenomenon in a band that  — regardless of what he thinks — never would have risen to the heights of his buddies’ band, RHCP. So all the “what could have been hadn’t I done so many drugs” argument rings a little hollow. A thirty-seven-year-old guy (in 1998) singing about his fall from a spot he never really occupied is maybe something that I’m nit-picking, but is too intrinsically tied to my Thelonious Monster, underdog mentality to separate.

All this said, there are a few tracks on this album that I really enjoyed, like “Max, Jill Called,” “Tennis Shoes,” “It’s Rainin (4am)” and the album’s prototypical song that kind of sums up his whole existence on, “Cereal Song.” The lyrics can be a little hokey at times, but the emotion feels genuine and is delivered in that Forrest way that lets the nostalgia wash over me. I’m also a big fan of the album’s title. Side note: it may be proximity and subject matter, but it feels to me like the perfect soundtrack to the imperfect show, Flaked.