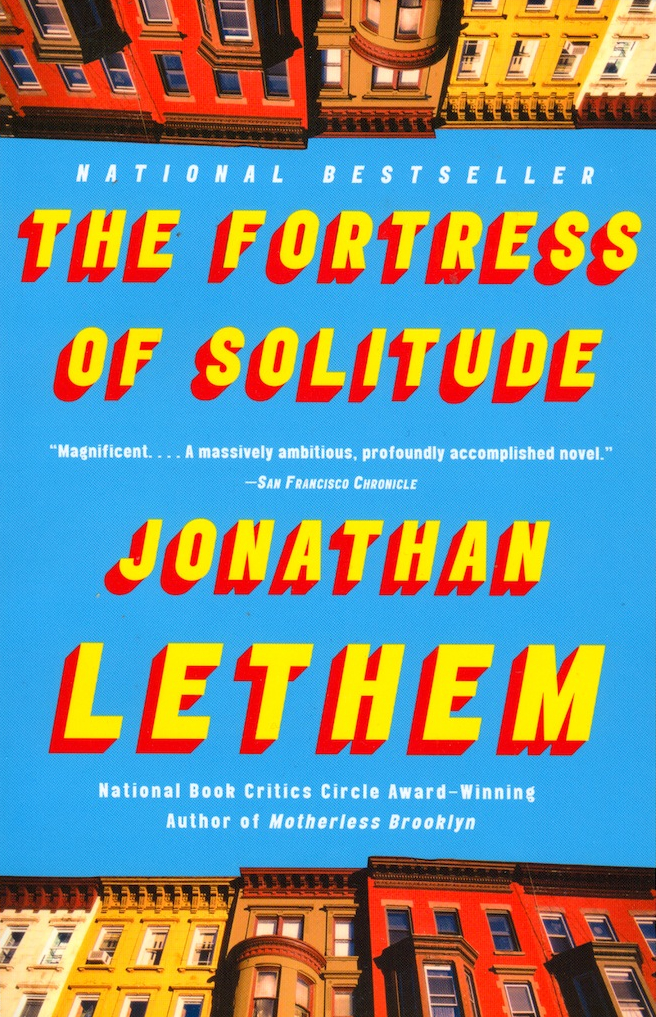 The Fortress of Solitude

To call this book vaguely racist would be a stretch, but it does seem that our author writes about being a white kid growing up in 1970s and 80s Brooklyn in an unflinching manner that involves daily fears of being robbed and beaten by his black neighbors. This race divide lasts well into his adulthood, and scars him to a point of genuine mental anguish. He watches as drugs and violence destroy his friends, and eventually end up shaping his life in more ways than he even realizes. Equally as influential on his life is his hermit father and wayward, hippy mother–the same people who moved him to this Gowanus / Boerum Hill area. The story revolves around this guy, Dylan Ebdus, and his struggles with his identity growing up always sticking out like a sore thumb, always playing the victim. He did graffiti because his black best friend did graffiti. He could do it better, but abdicated to his buddy because he didn’t feel he was worthy or right for the job. He became the owner of great power, but let his friend have the glory for the same reason. Ultimately it’s a book about disappointment and unfulfilled potential. Of course I’m kind of a dumbass when it comes to interpreting messages. The nice thing about the book is that it’s not just another dreary tale of family woe and rudderless depression. The thing throws in some curveballs with some magic–for lack of a better word–and very New York-centric details. It’s a story based in reality–the reality of a location and a time, but at the same time isn’t afraid to take chances with some fantasy elements. The book gets a tad repetitive at times (the word “yoke” is used like four hundred times in a span of about fifty pages), but not enough to dampen the wonderfully nostalgic feel and great storytelling put out there by Lethem. While conforming somewhat to the hipster, post-modern writing methodology, Lethem wrote a novel that will certainly stay with me for quite a while, and certainly inspire me to go pick up another one of his books.