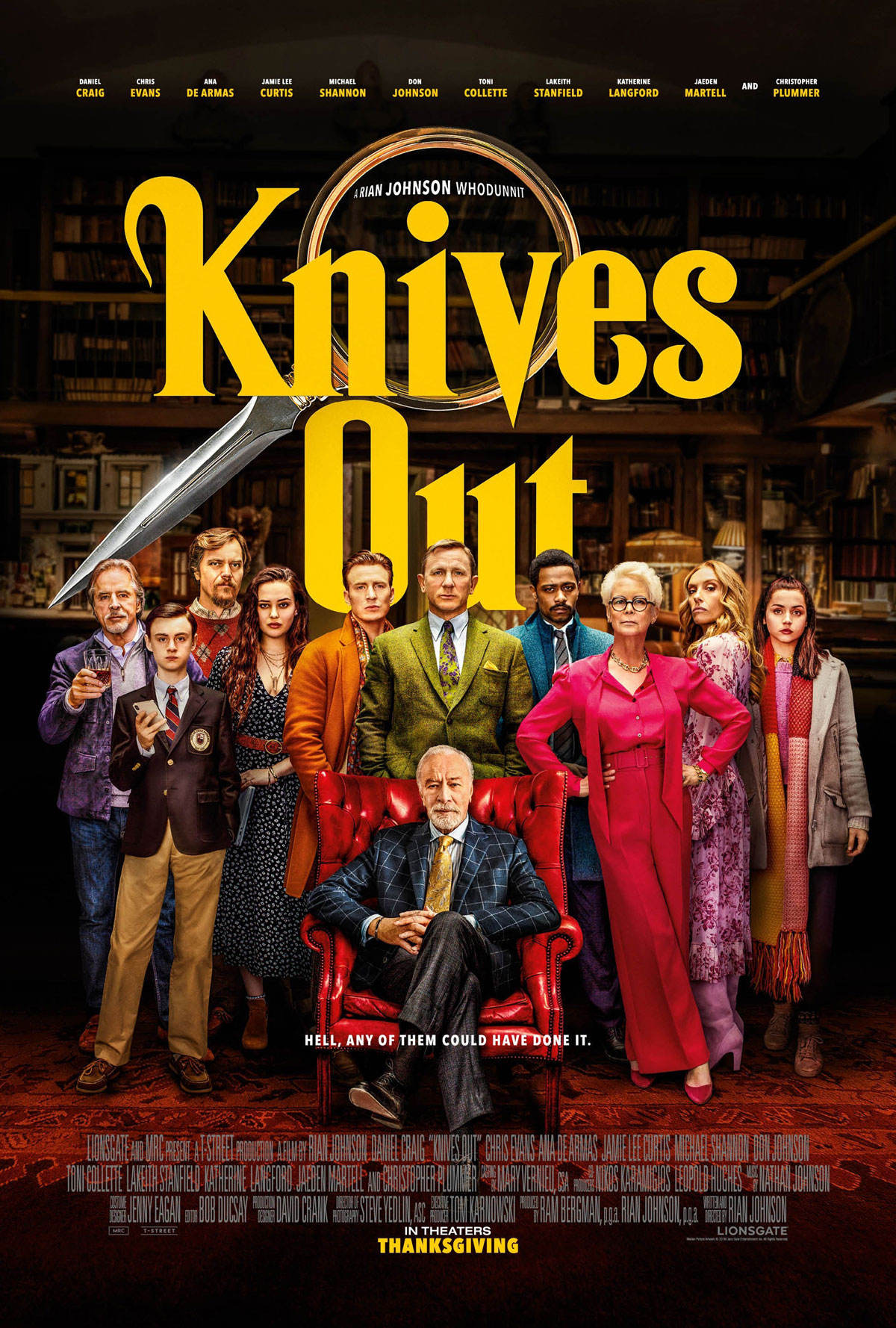 I recall the first time I saw a trailer for Knives Out. And I recall that I was excited as hell to see it. Never mind the fact it looked like a 2019 update of the movie Clue. I just dug the way it looked. The way it sounded. Everything about it spoke to me. A murder mystery with a witty edge. Who doesn’t love that? And, yes, I know I’m late to the game, as usual, but even settling in to watch this at home, I was anticipating it in the same way I might a Wes Anderson movie. Because it gave off that vibe. Its eccentric family dynamic, ensemble cast of terrific actors and the snappy dialogue felt of a piece with his films.

It turns out that trailers can sometimes outpace the actual films that they represent. After all, the pacing in trailers, the music, the editing can elicit a certain feeling in their two minutes that an entire movie has trouble sustaining over two hours. Knives Out certainly suffers this fate, as the end result just doesn’t have that snap, that sizzle that the preview promised.

That’s not to say that the movie is dull per se, but there are sections that do drag a little. The energy flags. The tone becomes too… normal. And maybe this is me overlaying my expectations on top of the narrative, but I just wanted more. More quirkiness. More infighting. More more. This family full of what we imagine to be despicable characters just aren’t despicable enough. Sure, they’re spoiled by their wealthy — and now deceased — patriarch, Harlan Thrombey (Plummer), but their deceptions and motivations are just kind of eh.

The mystery itself revolves around the death of the aforementioned Harlan Thrombey. A famous mystery writer, he has a bunch of adult children and their extended families who clearly depend on him for their careers and/or financial support. After his own birthday party, at which these family members gathered, Harlan ends up dead of an apparent suicide. Enter the detective (Stanfield) and private investigator, Benoit Blanc (Daniel Craig), who are tasked with figuring out whodunnit. Despite the fact this is an apparent suicide. And that’s the whole set up.

So once you have this mystery puzzle set, it’s time to work through it. In typical fashion we see each suspect talk through the night in question. It’s basically just straight-up exposition. Some of them are entertaining, some of them are fine and a couple are kind of clumsy. And I don’t mean in terms of the characters’ telling of their night, but the way the script approaches it. There’s not an equity there. They seemed more interested in some stories than others. Which, when you, the viewer, is trying to figure out what’s going on kind of tips their hat.

And when the mystery is unravelled, it feels more like a surprise than a twist. And it happens relatively early on in the film. And that leaves you thinking that there will be one more big twist before the end of the film. But it never comes. We know what happens. We have a pretty good idea of who did what. And then it just kind of ends in the same place it starts. And maybe it’s watching too many seasons of television like Sherlock, but I just expected more in terms of plotting. Even a random episode of Law & Order has more deception, red herrings, macguffins, feints, slight of hand, twists and turns than this relatively straight arrow narrative. We’re told that Benoit Blanc is this amazing detective, but I feel like I was ten steps ahead of him the entire film. And that, to me, is a failure of execution.

Look, this thing isn’t a waste of time or anything. But I feel like they focused on the least interesting character in the entire film, Marta Cabrera (Anna de Armas), rather than highlighting the amazing cast that they wrote for in what felt like a completely different way. They also wasted Lakeith Stanfield in a very straight forward role. And that Colonel Sanders accent that Daniel Craig does is kind of absurd. I’m sure if I hadn’t built up my expectations to the level I had that I would have enjoyed this movie more than I did. But, as it stands, I feel like they missed out on tons of potential with a less than satisfying result.