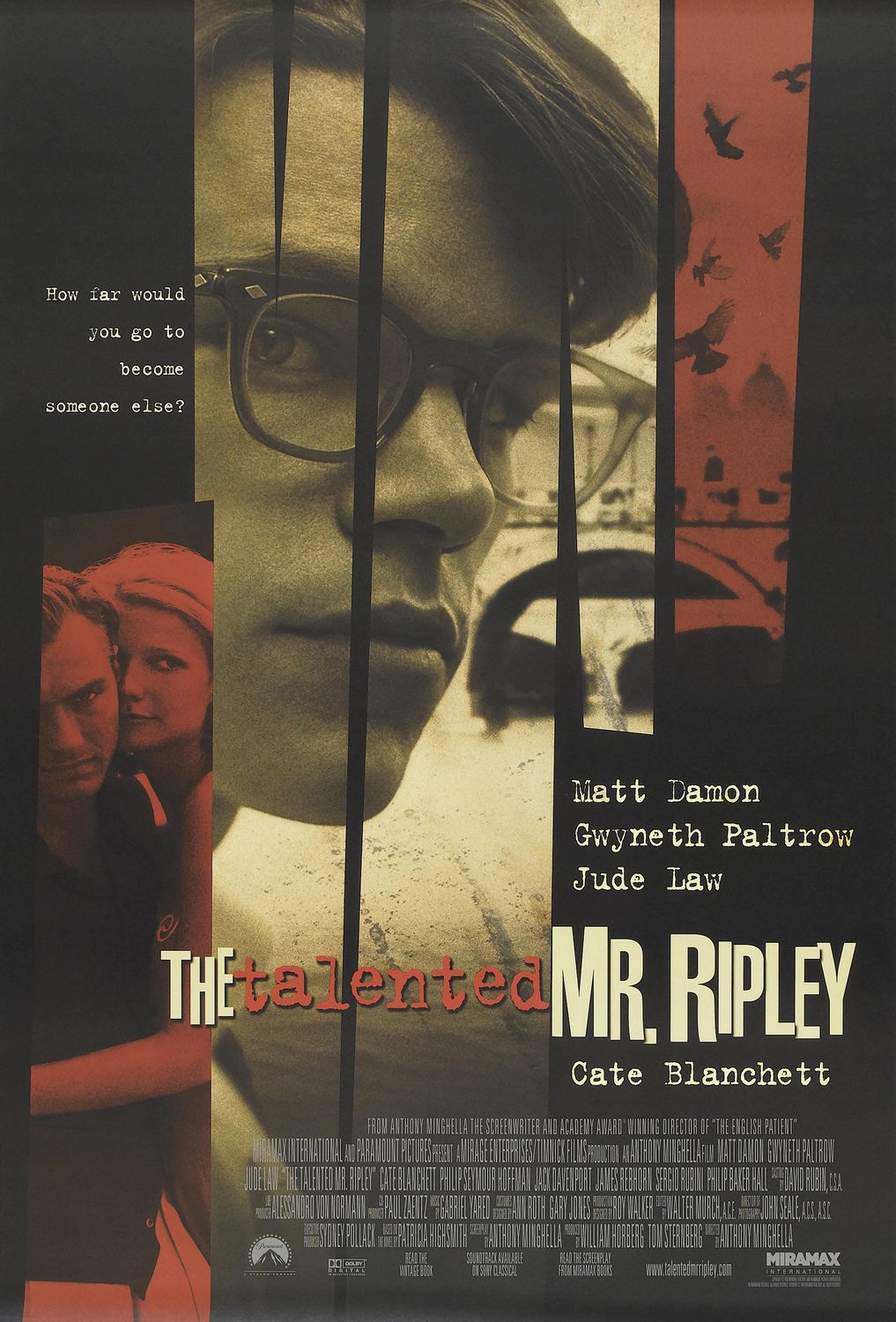 This is the movie that might make you (if you’re a total POS) exclaim, “How gay was that shit!?” But, seriously, Matt Damon is really creepy as the gay sociopath, Tom Ripley. One line delivered to Jude Law’s character, Dickie Greenleaf, still haunts me, “Do you mind if I get in the tub?” It doesn’t sound that bad here, but it’s immensely disturbing when you see the visual.

Anyway, Ripley is this poor schmo who dreams of playing the piano at Carnegie Hall. Unfortunately all he can do is work as the restroom attendant at the Metropolitan Opera House and play the piano at night after everyone has gone home. Very sad. Due to some misunderstandings and lies, Ripley gets to meet Herbert Greenleaf, Dickie’s extremely wealthy father, and is paid by him to go fetch Dickie from Italy and bring him home.

Ripley goes there and meets Dickie and his intensely wishy-washy girlfriend, Marge (Paltrow). This is the part where I launch into my anti-Gwyneth Paltrow tirade… She has absolutely no inner strength. When casting directors are looking for a wet rag actress who can cry at the drop of a hat, they call Gwyneth. When they are looking for someone who can do a fake, affected accent, they call Paltrow. When a writer writes a great role for a woman with some balls, they steer clear of Paltrow. She’s the queen of flimsy roles. This one is no different, as Marge puts up with Dickie’s philandering, broken promises and stupid lies. She’s powerless against the whirlwind that is his charisma. Just like every woman in the film, Ripley soon falls under Dickie’s spell, and becomes another one of his fawning crew.

His plan to bring Dickie back to the US abandoned, Ripley basically fools himself into thinking he is the flaky Dickie’s boyfriend. Unfortunately for Ripley, Dickie doesn’t like Dickie. You can guess what this leads to… murder and adventure in Europe. Ripley then takes over Dickie’s identity and lifestyle, all while playing an intricate game of Three’s Company with the rotating cast of characters in Dickie’s life. Someone walks in one door, he’s Tom. Another walks in another door, he’s Dickie. The silliest thing about his transformation is that he looks nothing like Dickie, but manages to fool everyone by combing his hair a little differently and taking off his glasses. I guess it’s one of those Clark Kent/Superman things we’re just supposed to believe.

You’d think from watching this movie that Italy was only two square miles or so, as Ripley continues to bump into people he knows all over the country, setting up tense situations with people in the same place who think he’s Tom vs. Dickie or Dickie vs. Tom. Too many coincidences ruin perfectly good plot lines. Speaking of plot lines, we don’t really get a sense of why Ripley is all of a sudden so interested in murder and wealth. Yes, we know he was struggling back in NYC, but we get a sense it is out of duty to his art (playing the piano). We don’t really get a sense he wants to be comfortable, just successful in his chosen profession. The motivation just isn’t there. Plus, as I wrote earlier, he’s so creepy.

Despite the plot holes and lack of editing (the movie is two hours and twenty minutes long), the film itself was beautiful. Minghella really knows how to shoot a scene. His direction is solid without being schmaltzy, and he really uses colors and textures amazingly. Of course, shooting in Italy probably helped a lot with the beauty of the landscape. I know this hasn’t sounded all that positive, but this movie is actually better than most in its genre: psycho murder films.