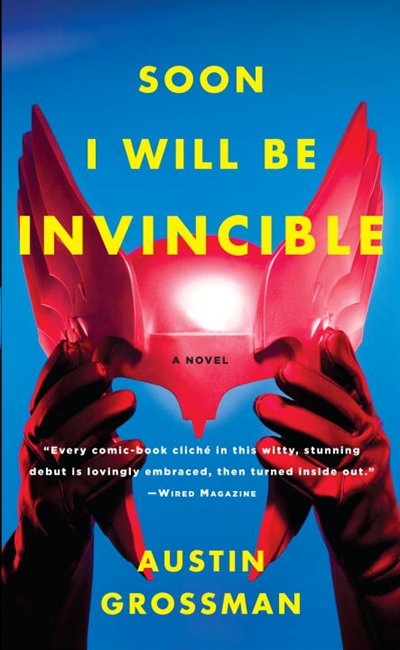 Soon I Will Be Invincible

Never really being a reader of comic books, my lone exposure to superheroes and the like has come through Christopher Reeve movies and Superfriends cartoons. I did also read a novel a few months back that retold the story of Superman to some extent called It’s Superman!, but that is obviously a drop in the bucket in terms of the hero universe. This book outlines a world where super-powered heroes and villains live amongst us. They are multitudinous (in comparison with your typical comic book) and all have their own origin story. There are a lot of industrial accidents involving electricity, chemicals, nuclear and/or cosmic energy, some genetic mutations, some aliens, some folks from the future and even some fairies and elves. Our story is narrated by two different superbeings; one a good guy and one an evil genius plotting her, and her group’s, demise. Our good guy is actually a woman cyborg who was just a normal twenty-something in South America on vacation when she was rundown in a car accident and left for dead. Before dying she was rebuilt as a bionic super-soldier of sorts; half woman, half computer. She becomes a government assassin and mercenary and is eventually recruited by a newly formed supergroup of superheroes called The Champions. Meanwhile, their arch nemesis, Doctor Impossible, is escaping from prison and plotting to once again take over the world. To add to the fun, the other new recruit to the good guy team is Doctor Impossible’s old girlfriend, who has apparently turned over a new leaf. One by one we find out all the heroes’ backgrounds, and their eventual move into superhero superstardom. We also get the first-person perspective of Dr. Impossible, who is both the smartest and one of the dumbest men in the world. Despite his astronomical I.Q., he can’t seem to avoid falling into the cliched evil-villain trap of sharing his plans before eliminating an enemy and generally believing his own hype and falling victim to his own ego. Dr. Impossible is easily the most interesting and fun character in the book, but isn’t the bad guy always that way? Much like other super-villains, his meanness is born of jealousy, and it seems at times that he loves his enemies more than they love each other. After all, it was one of his experiments gone awry that created the world’s most powerful (and popular) superhero, who has become his own mortal enemy. We find out throughout the book that these super creatures have all the issues of normal folks (which isn’t a novel idea these days), and are written with a lot of humor. It’s difficult to tell sometimes if Grossman is going for farce or spoof or is merely trying to re-imagine the superhero world, but I think in the end he is a fan of the genre and is merely trying to expand on its potential. There are some parallels to Heroes, but for the most part it is a story about the cycles of infamy and fleeting nature of fame. It actually mirrors our star culture more than anything else. This thing has movie written all over it with its witty writing, timely subject matter (sci-fi and hero worship isn’t just for nerds anymore) and ready made underlying social commentary. Sometimes a fun summer read just hits the spot.