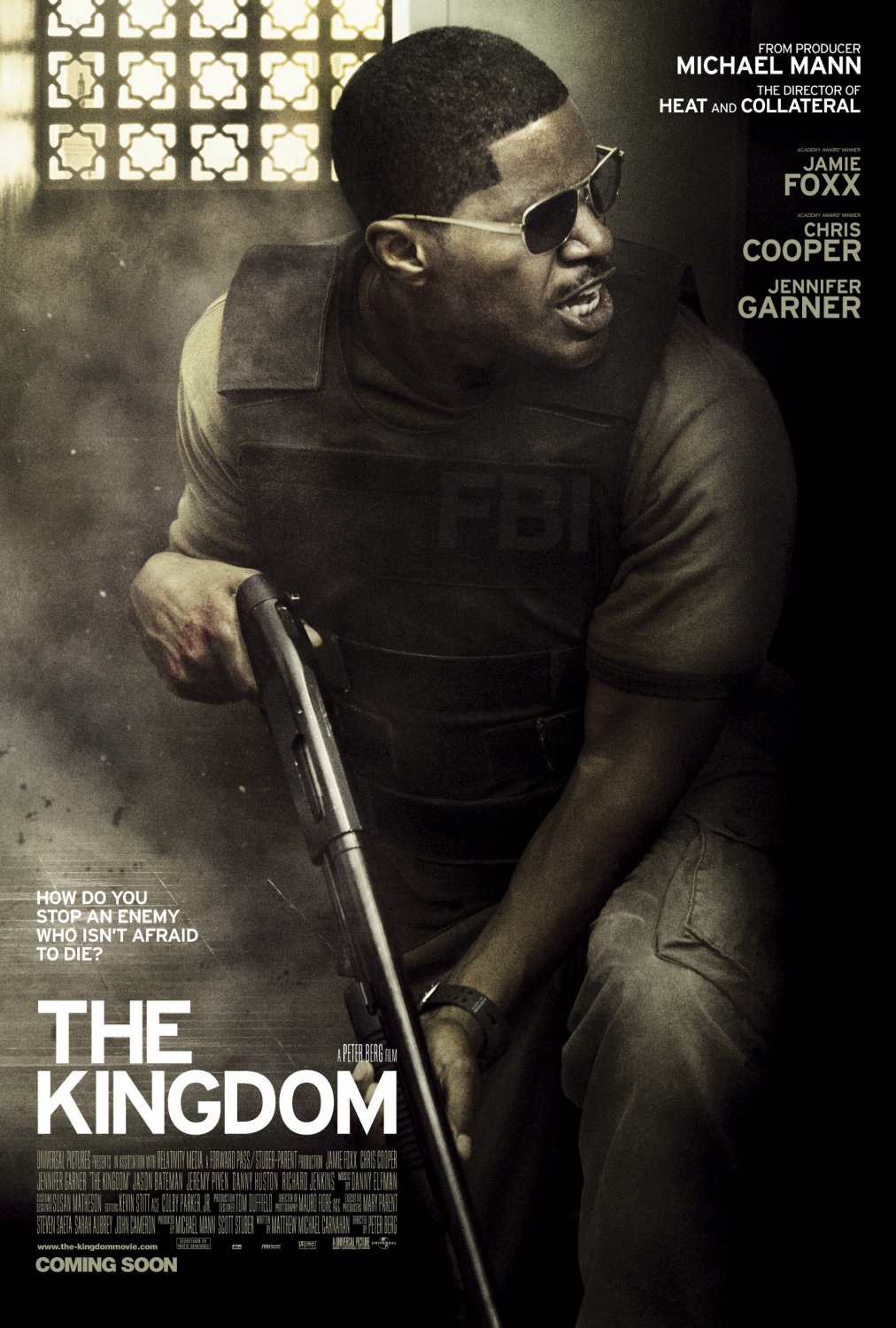 Despite some deep-seated hatred I have for everything Jamie Foxx (really, how many x’s does a man need), I dialed up The Kingdom on demand and prepared myself for some major eye rolls and raspberries.

And then the shite starts off real intense. A bombing at a US military compound in Saudi Arabia. Taking out children, non-military, everything. And in comes the ambulance to take away the injured, and bam! The real kill. It’s pretty brutal to watch only because it really does come off as very realistic.

After the bombings, the political machine starts churning. How do we react? Retaliate? And who against? And while the politicians are hemming and hawing, in comes this FBI commando group that wrangles a trip to Saudi Arabia under semi-questionable pretense. Led by Jamie Foxx, they are an unlikely group that at first blush seems more diplomatic than ass-kicking, but we soon find out that truth. They are trying to hunt down the mastermind behind the killings (an Osama Bin Laden-type) and stop his imminent jihad against the west.

At first the group (also comprised of Jennifer Garner, Chris Cooper and Jason Bateman) is not allowed to really investigate, but rather must follow around the Saudi police and just observe. After some more wrangling, though, they get a guy who they realize is sympathetic to their cause to be put in charge of the investigation. From there they raid a compound and do a bunch of digging and talking. And just when you’re like, I’m not sure about this, there’s any amazing SUV chase scene that is all explosions and shooting and awesomeness. And then we follow that with one of the most intense firefights I’ve ever seen. The group goes to a neighborhood packed with terrorists and terrorist sympathizers in order to save their cohort, and all hell breaks loose. There are rockets and bullets and grenades and all sorts of crap just blowing up everywhere. Any thought this was going to be a taught political thriller is basically out the window. It’s a first person action shooter now.

The action then proceeds along at breakneck speed, never really resting for a second. Peter Berg directed this? That Peter Berg. The goofy buck-toothed dude from Aspen Extreme? Wow. Luckily Foxx does more punching and shooting than talking at this point (leaving that more to the much more enjoyable Bateman).

The movie ultimately ends like most action movies do (generally with someone getting something improvised and sharp in the eye), but this one avoids the Hollywood kumbaya moment by tacking on a little epilogue that is just downright depressing. I’m still a little torn whether or not that little tidbit is just some right-wing nutjob tomfoolery, or if it was in fact a deeper statement on the nature of anger and revenge. Between the action and the epilogue there is a scene meant to tug at the heartstrings, which it probably would have hadn’t it been delivered by that pompous ass, Foxx. Granted, it was a bit of that big movie hokery they probably felt necessary to do in order to fulfill the aforementioned kumbaya quota.

Overall I was surprised to be as entertained as I was by this film. Thing is, I could have just as well had it on in the background while “working from home” and just given it my full attention when the dude on the rooftop fires that rocket into our protagonist’s car. Damn!