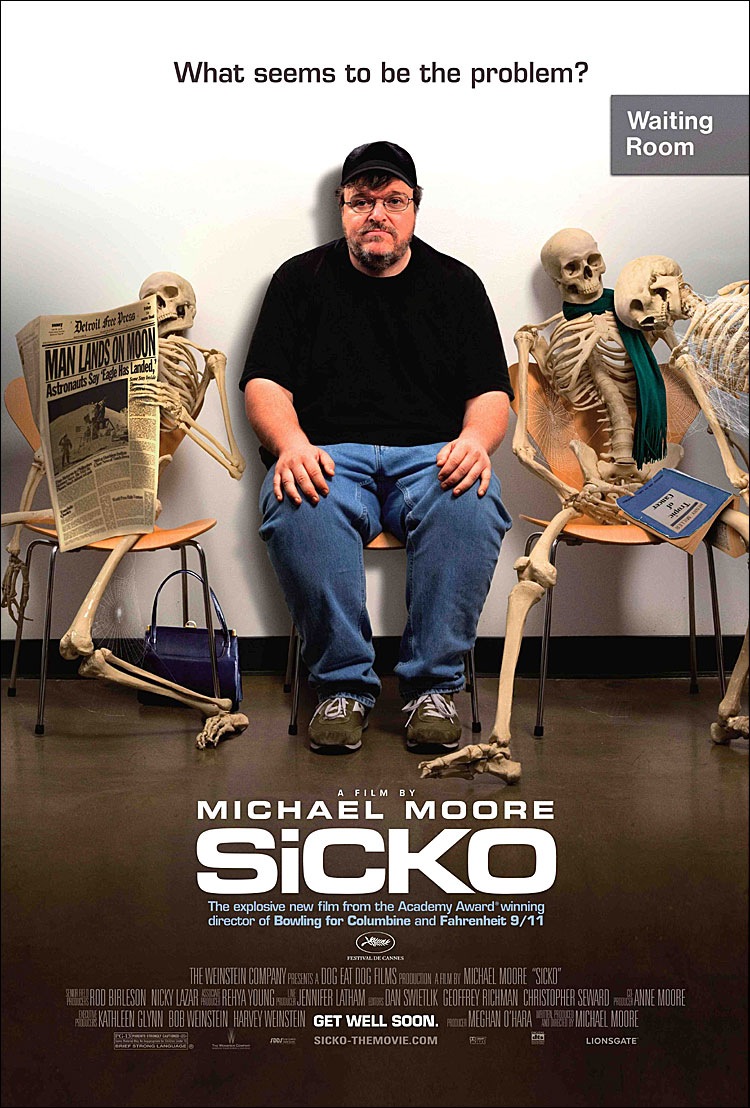 I’ve always found Michael Moore’s movies interesting, but ultimately a little too Michael Moore-ish for their own good. The guy is a showman, a grandstander, a guy who relies too heavily on editing and exclusion in his films to give them the true impact that they should have. They always feel just a little too thrown together.

Sicko is the honestly the worst one yet. He’s clearly been duped by his own hype and taken in by his own zealousness to prove a point. That said, this is his least political film to date, and attacks no particular party for the state of American healthcare, but the country itself for being slow to accept what others in socialist countries around the world, Europe and Canada have been enjoying for years. The overall message here is that the US cares not for its citizens, and values the business of healthcare over human lives, while most other countries care if their citizens live or die and profit is just secondary.

The problem here is that Moore talks to us like we’re five, and the movie plays out like a bad rendition of an after school special about the bad healthcare monster. First Moore talks to Americans who can’t get operations and whatnot because their healthcare providers have, for one reason or another, denied their claims. It’s a sad reality in the US, and it does truly suck. Flash to Europe where apparently nobody loses limbs, dies of cancer or is denied an extra set of lungs. And it all costs like five cents. Guys with axes in their heads don’t wait more than two seconds in the emergency room and they’re practically handing out pricey prescription drugs on the corner or every intersection. I’m going to go out on a limb and say that this definitely isn’t always the case. But with Moore it’s black or white. Everything in the US sucks, and Canada and Europe is like heaven raining Viagra and anti-depressants. There is no mention of the enormous taxes the citizens are paying for this right, the lack of specialists and what the quality of the health care actually is. I’m not saying this wouldn’t necessarily be worth it if we could have universal health care, but the reporting here is unreasonably one-sided to the point of silliness.

And then comes the worst part of the film comes along. Moore takes a small group of 911 workers to Cuba to get medical attention. This is a Communist country. Has the man never heard of their amazing powers of propaganda? He falls for their dog and pony show hook line and sinker. This is a country where the average citizen makes like five dollars a year, the “rich” folks are driving around in rusted out 1967 Cadillacs and the electricity runs on pedal-power. And yet here they are with the island’s one MRI machine (powered by a mule walking around a wheel in the adjoining room) and a doctor who looks to be right out of the latest Telenovela. The Cuban firefighters line up to salute the rescue workers with a look of utter and complete incomprehension in their eyes, obviously told by some party official to line up and salute these stupid gringos for the film cameras. It’s such an obvious thing that it seems almost comical, yet Moore uses this as just another example where a foreign country cares more for our citizens than we do. Jesus, I’m sounding like a right-wing nutjob. I’m really not; I’m just confused by Moore’s hubris here to think that we’re going to go in for this.

Moore, as usual, has a good underlying point, but sabotages it by being to heavy-handed. Our healthcare system is broken, and maybe we can take some queues from other countries, but to wholesale take his side in the argument discounts the many differences between those countries and ours. I don’t claim to be a genius, or even know much about the healthcare system, but in the DVD extras they point to Norway as having the most amazing health care system on the world and the best quality of life. They also have a completely homogeneous population, none of the historical labor, immigration and racial issues that the US has and is somehow two ranks worse than the US in world suicide rate and is the home to black metal. What gives? It’s just a bit of apples and oranges, and Moore regrettably never brings it up.

Was I shocked by some of the stories in Moore’s movie? Sure. Did things make me angry and confused? Again, sure. But in the end I just felt like I was only getting half the story. Besides, I’ve met a bunch of Canadians, and they seem angry under the pleasant surface, and what with the French working only 30-hour weeks (15 of those spent smoking and eating cheese), no wonder they’re healthier than us overworked dogs.