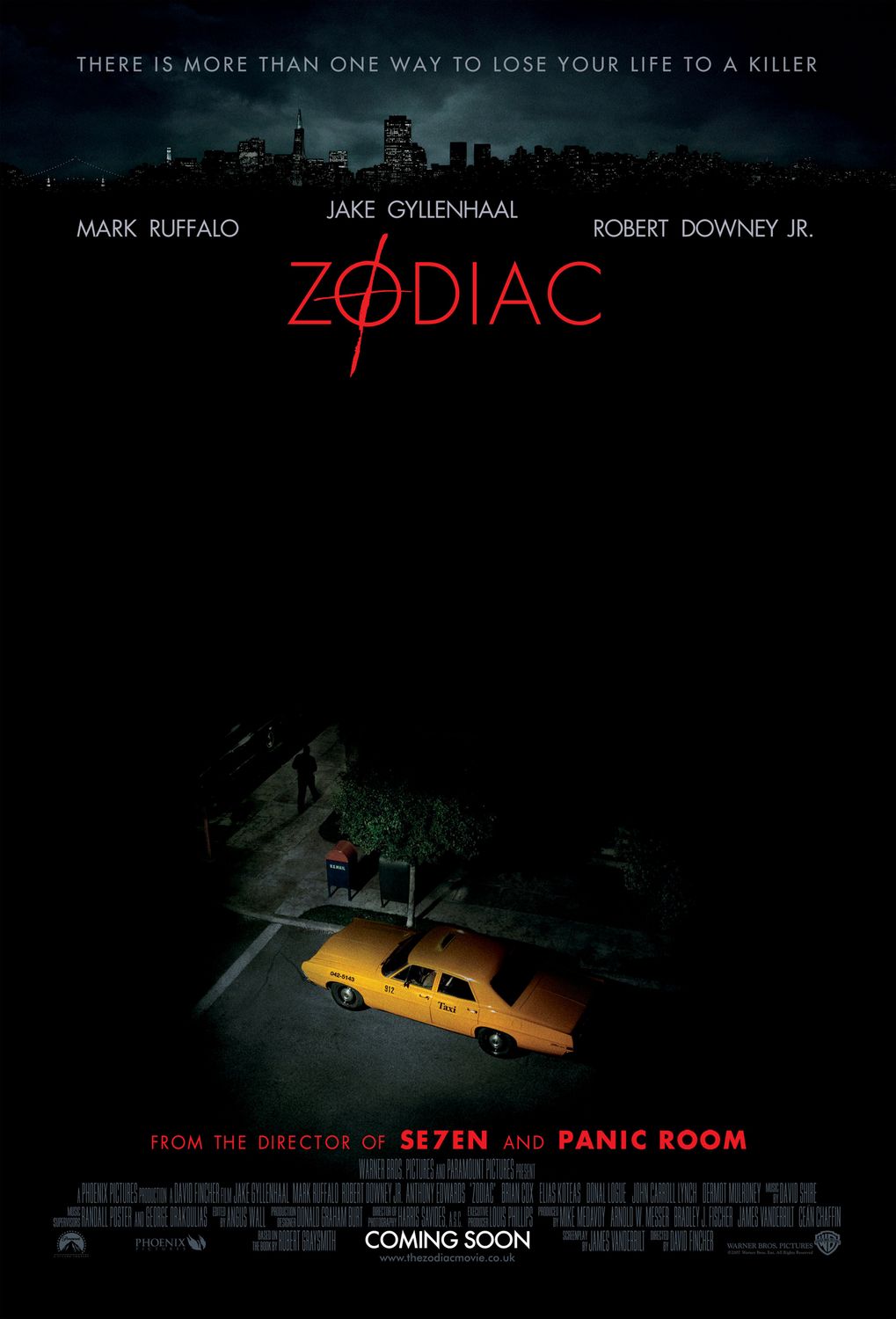 This one has been on my list for quite a while now, but for some reason it has eluded me while other complete pieces of shit have burned themselves into my retinas. Why, I ask, am I so discerning when it comes to the books I read, but will watch any old crap that rolls my way? Because. Because sometimes I enjoy seeing poorly made movies. I like seeing drek and wondering how or why they got made. Or I watch movies as mere background noise (see all Drew Barrymore and Kate Hudson vehicles). Books take more concentration and, honestly, more time. So maybe Zodiac got the axe on so many occasions because of its 162-minute running time. That’s a lot to invest on a weeknight, and I like to think I have something better to with my weekends than sink into the couch for almost three hours–but, truth be told, I do not.

So I settled in to watch Zodiac one Saturday night with Comcast’s wonderful On Demand service (dripping sarcasm anyone?) and prepped myself for a David Fincher gore fest. After all, this is the guy who had us watch Jared Leto’s pretty face graphically get turned into hamburger meat in not one, but two, of his films (Fight Club, Panic Room). Not having great recollection of how Zodiac killed his victims, I had visions of a dude slowly getting his skin sliced off, or hatchets hitting bone, etc. In other words, Fincher doesn’t, uh, flinch when it comes to showing the darkness and vileness at the core of evil. It turns out this isn’t that kind of movie.

Far from a slasher or a serial killer movie, really, Fincher’s film concentrates on the destructive nature of obsession. And, in this case, it’s not the killer who is obsessed, but the men chasing him. Our two main men in the middle of the investigation turn out to be a reporter, Paul Avery (Robert Downey Jr.), and a cartoonist for the San Francisco Chronicle, Robert Graysmith (Jake Gyllenhaal). Avery clearly has his own demons he’s battling, including a nasty habit of drinking entirely too much too often, but the Zodiac killer provides him with something to obsess about besides his own self-destruction. Avery, a young husband and father, is just an awkward newspaper employee who originally takes on the Zodiac killer challenge as a hobby, but it quickly turns into something far more important to him. Their motivations are different on the surface, as Avery just wants accolades or career kudos for breaking the case, while Graysmith’s motivation seems much more altruistic, as he empathizes with the victims and feels he needs to solve it in order to stop the killing of innocents.

Fincher’s pacing is always very even in his films. He doesn’t do what you’d expect in terms of the typical thriller slow burn into frenzy and ultimate shoot-out with the bad guy, etc. This movie is no exception, and I’m sure to some might come off a little on the boring side. How you could be bored in a Fincher film is beyond me, what with his frames always filled with interesting images, set design and character reaction, but there are sections that almost sag. But he keeps that underlying charge going, building subtle tension in scenes that are taught even when not a whole lot is going on. Throw in Mark Ruffalo’s cop, David Toschi (on whom Eastwood’s Dirty Harry character was based), who is also obsessed, and ultimately defeated by the Zodiac’s taunting, and you have a great bellwether to balance the two other guys involved in the case–one of whom spirals into alcoholism, drug addiction and career suicide, and the other whose obsession becomes his life, replacing his family on the priority list. Ruffalo, whose job it is to actually find the killer comes to the realization that it can’t be his sole reason for living, and pulls the plug in a responsible way in terms of maintaining his own sanity and the sanity of those around him. Not so much for the others.

Ultimately the crime goes unsolved, which is of course a little frustrating after sitting through two hours and forty minutes of film, but it is a true story after all, so it kind of had to end that way. Since the movie is based in part on Graysmith’s book he wrote about his research, there are theories espoused about who the killer is, but those conclusions are controversial and completely circumstantial. Fincher plays it close to the vest in terms of who he feels did it, but seems to lean in the direction of Graysmith’s theory. Because of the ambiguous ending, the narrative doesn’t necessarily follow the clean course that most whodunits seem to follow. There are multiple “aha!” moments and several red herrings along the way for both the viewer and the characters themselves. The killer’s murders are so disjointed and oddball that it even occurred to me at one point that it wasn’t the same guy perpetrating all of the murders. In fact that seemed to be what they were insinuating in the movie, but I’m not really sure. Was it the Zodiac taking credit for murders he didn’t do, or copycats doing their best imitation? I might have been remembering the fact that there was in fact a copycat murderer in NYC in the early nineties. Who knows? Anyway, they seem to put a lot of credence in handwriting analysis and whatnot, which all seems like a lot of crap considering the letters themselves could have been written by somebody other than the killer or with the wrong hand or whatever. Now who’s getting obsessed?

Anyway, I’m the one who always watches the Dateline murder mysteries, so I’m kind of a built in audience for this. I did feel it got a little muddled in the middle as we tried to work through what was a real murder and what wasn’t and who did what. And the Zodiac showing up with his bizarre black KKK get-up on a hillside with a knife was bordering on comical (also leading to my disbelief this was the same guy who shot a couple in a car in the beginning of the movie sans costume), but apparently this was his shtick. Ultimately the guy was an enigma, and clearly deluded to the point that he was just too crazy (cuz he didn’t seem all that bright) to get caught.