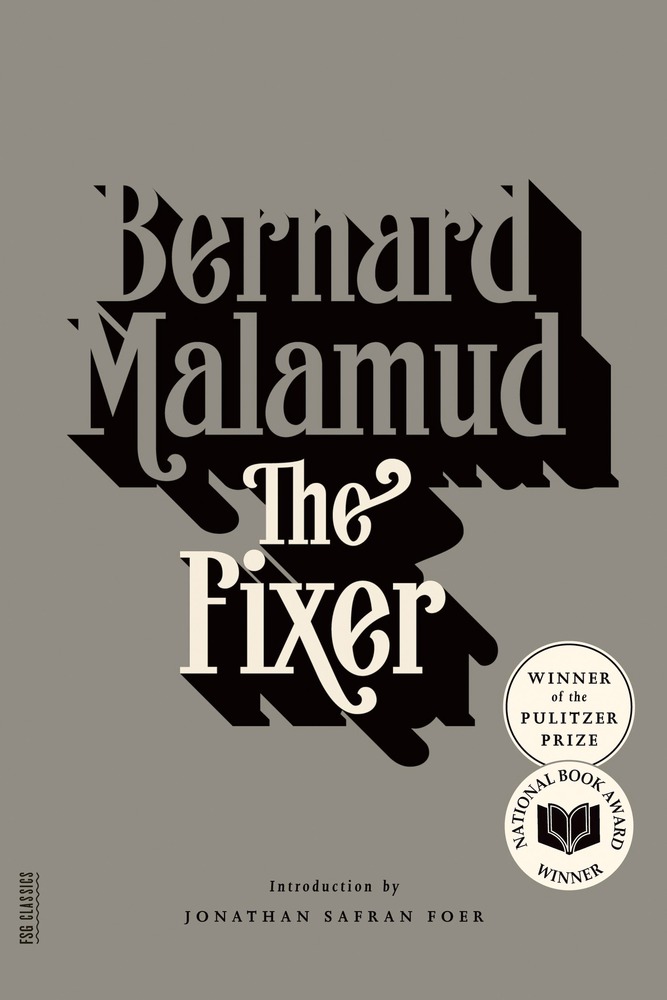 You’d think I had some sort of Russia fetish what with all of the books I keep seeming to find about life behind the Iron Curtain (like Buddha’s Little Finger, House of Meetings, Stet and others).

It isn’t intentional, I tell ya, although I do find the whole Soviet experience fascinating on some level. This book was slightly different than most of the others, though, as it concentrated on an earlier time period when Tsar Nicholas II was the man, and all that commie shite was just a twinkle in Lenin’s eye. Despite the shift in time periods, it’s good to see that my people (the chosen people) were still treated like crap.

This semi-classic tale concentrates on one such Hebrew who dares to try to escape his meager existence in the country by moving to the Kiev to ply his trade as a fixer (basically a handyman) with people who may be able to pay him in more than a pat on the back or a handful of grain. Beyond his failure to get paid for his work, his wife has up and left him for some wandering goy, and has left him alone and childless. His only friend is his father in law, his only possession a bag of tools and a cow, who he trades to his father in law for a bag-of-bones horse and a broken cart that he uses to get to the Kiev.

In his attempt to change his life, he moves into the Jewish ghetto outside the city and goes in to try to pick up odd jobs. One night fate finds him when he discovers a rich guy passed out in the snow. He helps the drunkard into his house, and is rewarded with a job offer that will pay him more than he’s ever seen in his entire life. There’s a catch, of course, as he’ll have to live in a place that is verboten for Jews. He struggles in the moment to admit his Semitic background with his new employer, but his admission would lose him the job and all that comes with it. So he decides to lie by omission, take the job and risk being found out–a violation that is punishable by all sorts of things.

He works the job diligently for a time without incident, but one day a boy (whom he happened to chase from the brickyard in which he lives and works) is found dead, stabbed multiple times and placed in a cave. And the search for a scapegoat is on. And under Tsarist Russian rule, and throughout history, nobody makes a better scapegoat than the Jews. Pogroms were all the rage in Russia back then, and it only took a small incident to spark riots and mass chaos that usually ended with a bunch of dead and homeless Jews.

Already suspicious and pissy, some of other men at the brickworks–whose stealing scam he put the kibosh on–essentially out him as a Jew. And in those time of pogroms, horrendous anti-Semitism and cruelty, Jewish equaled guilty. He is hauled away and thrown into prison as the prosecutor builds his case against our protagonist, Yakov Bok. Yakov basically spends the next bunch of years rotting away in prison waiting for his trial to start. While in there he has time to review his life, his religion, and his affect on others and on the world. He is continuously denied a fair shake, shackled, starved and frozen, and asked to sign away his innocence, but he refuses to comply. He is unrelenting in his claim of innocence, but the government, despite turning every person in his life against him, and inventing witnesses left and right can’t flip him. He is more than a man; he is representative of righteousness and a whole race of people. Ultimately Bok prevails–at least in spirit–when he realizes that his struggles are actually bigger than he is, and that his tribulations have not been in vain.

This book, while grim-sounding on the surface, is actually somewhat uplifting in its spirit. Malamud keeps the voice fresh and contemporary and despite being written in 1966 feels like it could have been written this year by any number of Safran Foers or Eggerses. It’s a book I looked forward to picking up every day, as our main character was compelling in a strange way. He kind of annoyed me at times, actually, but I couldn’t help but wonder what atrocity would be visited upon him next. I was absorbed. I think it’s on to my next Malamud book at some point, as apparently he’s a pretty good writer.