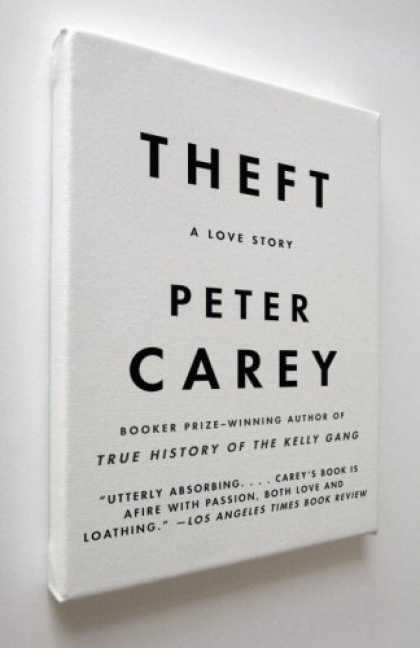 Peter Carey is quickly becoming one of my favorite storytellers. The guy can spin a yarn with the best of them, without stooping to the level of commercial blechiness or clearly writing parts for Brad Pitt and Benicio del Toro. This is, however, a relatively straightforward story with all the twists and turns one might expect in a good indie movie–or even a commercial film that decided to take some chances (hint, hint, you studios out there).

Michael “Butcher Bones” Boone is the son of, well, a butcher. He has grown up to be a pretty famous artist in his home country of Australia. He, like most artists, is self-destructive and filled with a weird mixture of overconfidence and complete self-loathing. He is divorced and suddenly finding himself “out of fashion.” Relegated to mooching off of patrons of his formerly popular art, he finds himself living out in the sticks with his slow, but very observant brother, Hugh “Slow Bones” Boone. Butcher has no qualms about charging large amounts of money on his patron’s account in order to live and make an attempt to get his art career back in gear using expensive paint and big canvases.

And then one day our femme fatale, Marlene Leibovitz, shows up. Turns out she’s the wife of the son of a very famous painter and she’s out in that area of Australia to authenticate one of her husband’s father’s paintings. The plot is a little too complicated to explain in this short space, but suffice it to say that she seems a little shady, and she’s dealing with very expensive art, so you do the math. There are shenanigans afoot.

The story continues, moving to Tokyo and Manhattan and ultimately back in Australia. The narrative is told from the perspective of the two brothers, both of whom have unique voices and are comical and introspective in their own ways. They end up being dragged around by the mysterious Marlene and her promises of resurrecting Butcher’s career, which she miraculously does. But what are her true motives? Why does she care so for the simple brute, Hugh? And does she really love Michael? And does Michael really care for her, or can he really love anything more than his paintings? The back and forth in the narrative keeps things fresh and the perspective ever shifting. It’s also a good technique in order to find out things about each character that the other wouldn’t necessarily reveal.

Ultimately this is a heist film that is filled with humor and quite a bit of humanity. The Boone brothers are so well written as to be memorable long after the fact. Even Marlene and her pathological thieving and violence, while a little over the top, make for a fun time. Carey is really masterful in his descriptions of his characters and their surroundings. He doesn’t use the ten-dollar words, but combines adjectives and metaphors in poetic ways that make scenes sing. I couldn’t wait to pick this thing up every morning on my way to work and read more about the caustic Mr. Boone. It’s his warm underbelly, though, that keeps the character likable and memorable when he could have been just another bitter art jerkoff. I like it.