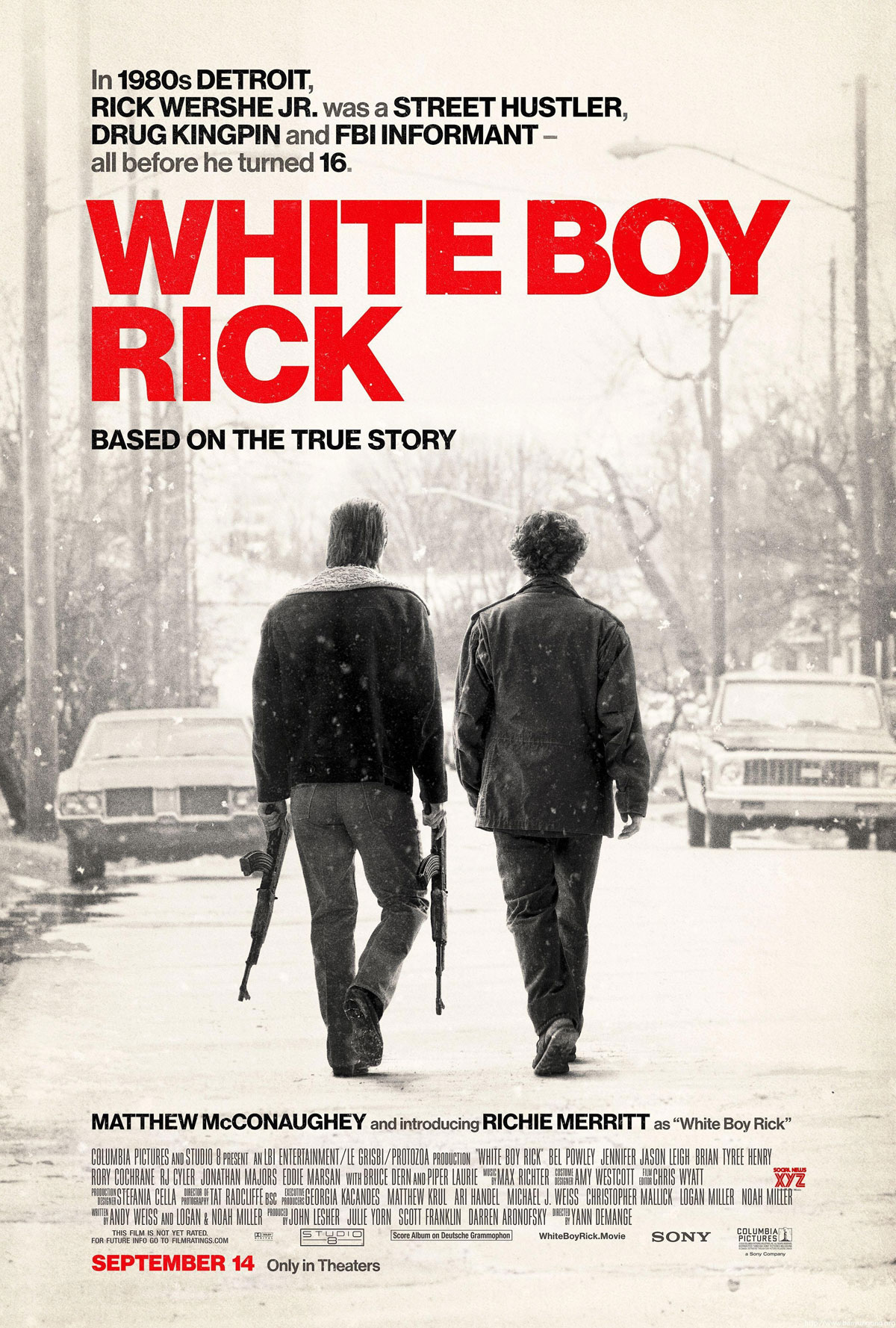 In yet another film where the most remarkable thing is Matthew McConaughey’s wig, I can’t help but feel that squishing the life story of a single human into 111 minutes is an almost impossible task. Though filmmakers keep trying again and again to do it. I suppose, in this case, that this real-life crime biography is a lesser-known one, but it still feels like large chunks of it are missing. And, I suppose when it comes to these things, it’s all about finding balance between the backstory, the meat and the post-story to create an even, emotional tale that hits all the right spots. This one just felt a bit unbalanced, setting up the action too quickly and kind of yada-yadaing the part where this white boy in Detroit was adopted into an all-black crew. I mean, it is the title of the film…

This was the quick setup. Rick Wershe (McCanaughey) is a sketchy dude with a greasy mullet living in Detroit in 1984 with his son, Ricky (Richie Merritt) and his daughter (Bel Powley). Rick’s job seems to consist of going to gun shows, buying cheap AK-47 knockoffs and selling them to local gangsters as authentic. Or taking those same guns and fabricating silencers for them. Seems like an odd (and not particularly lucrative) occupation, but I suppose supplying deadly weapons to folks to shoot up your own neighborhood is what it is. His goal — besides feeding himself and his kids — is to save up enough money to open a video store. This feels like a total movie writer trope, and I have a hard time believing this was really the case, but making this somewhat despicable/pathetic dude a huge film fan makes everything okay!

Anyhow, things don’t go exactly as planned. The daughter gets into the crack. And Ricky gets busted selling the guns (which they know came from his father). In order to keep his dad out of jail, Ricky agrees to be an FBI informant against the gangster who he somehow became close to. And here is where the problems start. First, why the hell did this crew take in Ricky so quickly? He’s the son of this notoriously shaky dude who came to sell them guns and then all of a sudden he’s hanging out with the gangster’s son and is being invited to like secret meetings and is embraced by everyone? Despite him being white. And despite them knowing next to nothing about him. Either they’re the worst crime syndicate ever, or the filmmaker just decided what I feel is a pretty crucial thing was not so crucial. It felt like a miss.

The other thing that was weird and completely rushed was the apprehension and coercion by the FBI agents to convert Ricky into an informant.  Jennifer Jason Leigh and Rory Cochrane play the agents in this kind of super-low-key way that feels like a trope in and of itself. They mostly seem worn down and sad. But they grab Ricky, tell him his father will go to jail unless he works for them and he just kind of shrugs and says, “Sure.” Granted, he’s supposed to be fourteen at the time so I suppose that’s not totally a weird thing. What is weird is that they ask him to start selling drugs. This white kid in all-black neighborhoods selling crack essentially behind the back of the crew he’s supposed to get close to. None of it makes any sense. He sticks out like a sore thumb and is also asked to do something that is seemingly antithetical to what they’re trying to achieve — get him close to this gang so he can inform on them. But they’re essentially asking him to stab them in the back. I think, maybe, that they’re not that good at their jobs.

And there’s the thing. The film’s writers decided to focus on Ricky’s relationships. With his gang, With his father. With his sister. With his baby mamma. It’s essentially a character study. Which I generally enjoy. But there are two issues with this. One is that Richie Merritt, who plays Ricky, is a first-time actor. He is compelling to look at and somewhat interesting in the way he talks. His acting is decent at times, but other times is not quite there yet. So delving deep into the character of a dude who doesn’t really show much range of emotion leaves us a little flat. Second thing is that there is a lot of legal wrangling and other stuff in this film, which is clearly trying to make a point that Ricky was taken advantage of by the system, etc. But in focusing on the character, they really did a very surface job of explaining the entanglements between the local and federal cops, the court/justice system and the fact he was a minor being asked to commit crimes by said entities. So, ultimately, the point they were trying to make gets lost in translation. It’s a shame really, as there is an interesting story to tell here that could have been more balanced and come out the other side a classic.