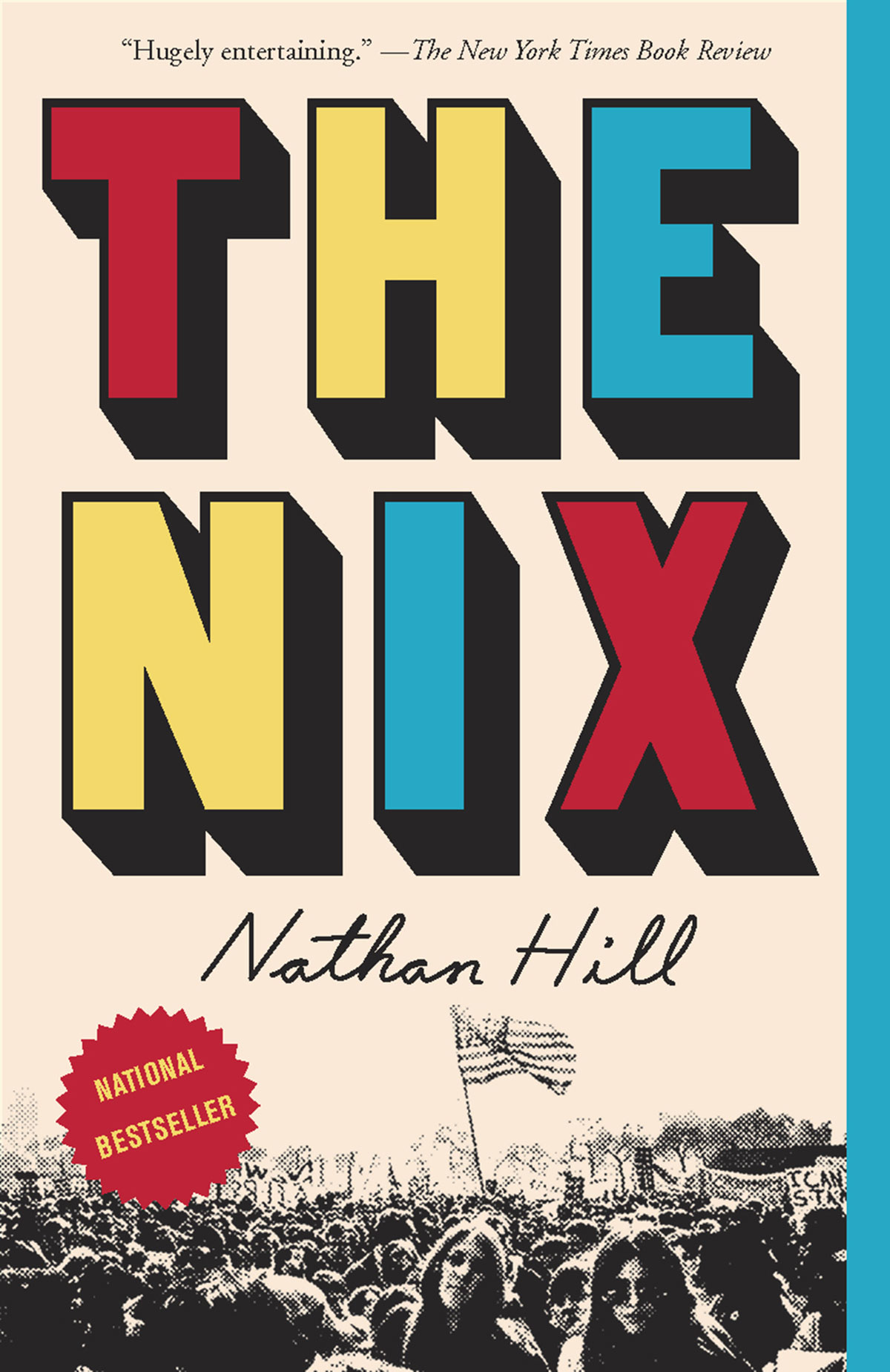 I constantly feel like I don’t read enough. I used to read quite a bit. But life comes at you. Podcasts come at you. Everything seems to take priority over reading a good book. So what do you do when you’re faced with the daunting task of reading an almost 650-page novel by a debut author like The Nix? Well, you put your head down and pray to god that it’s decent. Or at least not impossibly bad. All art being subjective, of course, so “bad” isn’t really a thing, but there need not be suffering in enjoying art when there is so much mindless garbage out there to watch and listen to.

So what does Nathan Hill have here? Well, he has something that feels very much like a modern piece of literary fiction. Something of a less emo Franzen. Or a way less Jewish Chabon or a less funny (and also less Jewish) Safran Foer. It has all the hallmarks: a screwed up family, historical events and a narrative timeline that bobs and weaves through the span of the book. Throw in some sexual abuse, drugs and damaged psyches and you have yourself a ready-to-read tome that aligns with the popular literature heroes of the age.

The plot revolves around the very novelistically named Samuel Andresen-Anderson. Who — and I know this is going to be a huuuuuge shock – is a writer! No. Fucking. Way. Yes, it’s true. A novelist writing about a struggling novelist. Or a sort of pseudo novelist. Which means that he’s — you guessed it — an English professor. It’s all so very writerly and sort of expected. But way back before Samuel was a writer/professor, he was a child. Like most of us were. And as a child his mother, Faye, abandons the family. Just up and takes off on him and his dad. Which, as you can imagine, is the defining moment in his life.

Flash forward twenty-three years and Samuel, already on the downslide from his moment in the sun as an award-winning writer and under contract to write his novel, is living life as a lonely, uninspired professor at a lame midwestern college. His novel nothing more than an empty page and his publisher on the verge of suing him for non-delivery. He plays some sort of RPG elf game all day and deals with stupid students. His life has no focus. That is until his mother resurfaces in the news when she throws some small rocks at a fictional presidential candidate in the 2012 presidential race. This sets him on a journey to get to the bottom of why she left and her life before becoming a woman who would throw rocks at a public official in front of TV cameras.

The Nix suffers from the same fate as a lot of books I read. It has one tone in the beginning. One I like. It’s breezy and sly with some almost sarcastic social commentary and characters who are just that side of weird. I think the intention is to point to millennial entitlement and the distractions of modern life, but that’s neither here nor there for me, as I live that shit every day at work. And his take is honestly already a little dated four years on. That said, the narrative moves and each chapter sets itself up well for the next. But then the author moves into something more “serious” and the thing bogs down, the tone shifts and the story just becomes stuck in the mud a bit and is just less interesting. In this case it’s when Hill shifts the story to become more of Faye’s story, flashing back to her time as a college freshman in Chicago in 1968. She has gone off to college as an innocent from a small farm town only to find herself surrounded by radicals and the free-love and the drug-taking craziness of the late 60s. She is swept into the 1968 Democratic National Convention protests and we meet a bunch of people that Faye interacts with, which also includes real people like Allen Ginsberg. And a silly detour into her roommate who has a ridiculously nonsensical (and out-of-the-blue) relationship with a cop who she does some weird sexual roleplay stuff with for no apparent reason.

And here’s where Hill clearly slows things down because he’s moved from the fictional world into a more historical fiction mode where he clearly feels he needs to get things at least 95% right. So he grinds on details that seem unnecessary and superfluous. Rather than building a world, he’s recreating one that we could get in a history book. And nobody likes reading those. I especially hate the Ginsberg stuff. And the roommate stuff. So Hill has this real person interacting with a bunch of fictional people in a completely fictional way. I don’t know how much Ginsberg research he did, but it all feels weird. There’s no reason for him to serve as big of a role as he does. This whole part of the book feels like a diversion and almost a completely separate novel. Maybe it should have been.

Hill’s style is relatively simple, but, at times, overly intricate. It’s not as if he only delves into detail when in 1968. He does it throughout the novel. Sometimes it’s relevent. Sometimes it’s not particularly relevent, but it’s kind of semi-insightful. Which is fine. But other times he goes into detail about something innocuous that doesn’t seem to serve much purpose. There are many pages related to a dumb student who ends up essentially blackmailing Samuel and I’m still unclear why we had to get into her story so heavily. It could have been completely excised from the book and nothing would have been different. She’s a moron and we have to read way too much about her being a moron. And I’m still not certain why, other than to get to one small plot point that could have been achieved much more easily. It just felt like Hill’s editor took a light touch. And at 640 pages, it felt like there could have been quite a lot of trimming without much in the way of lost narrative.

Now, did I enjoy portions of this book? Yes, I did. There is some clever writing, and some interesting character development. But because of its heft, there were sections and some characters I could have done without. But I suppose overall it was a fine experience. I did actually look forward to picking it up, and really tore through the last third of the thing. Maybe it’s because I was reading it by a pool in a warm-weather place, or maybe it’s because Hill’s writing is seemingly sophisticated without being overly challenging. Or maybe I actually enjoyed the plot more than I’m giving it credit for. Whatever the case, at least Hill landed the ending. Granted, it was unlike most novels in this usually downcast genre. I didn’t want to drown myself in that 90-degree infinity pool in front of which I was sitting. So, there’s that. I can tentatively recommend it, but would tell anyone reading it to expect the unexpected in terms of the book’s tonal turns. And if you don’t like a CBS ending, you might want to grab an Elliott Smith album and go somewhere else.