We Are All Completely Beside Ourselves 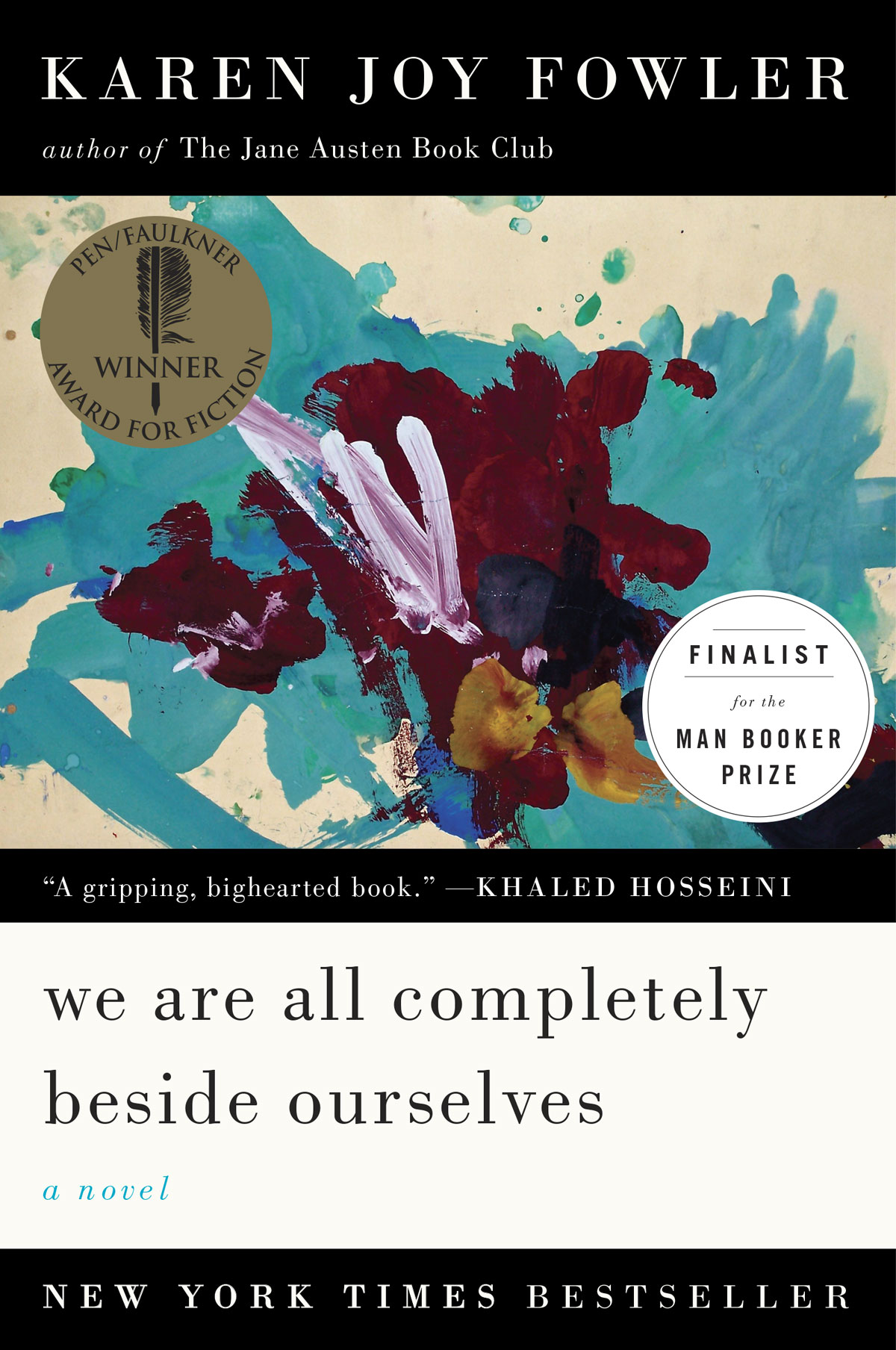 I came to this novel with very little idea of what it was about. The title, We Are All Completely Beside Ourselves, doesn’t give any indication. And the cover is also not an indicator of what’s what. In fact, even after reading the thing, I’ve no idea how the title has anything to do with it. I imagine the author, Karen Fowler, just thought it was clever and decided that she wanted a book with that title regardless of the narrative therein. It’s actually impossible to talk about the this book without spoiling a piece of it. So, you are warned.

The plot of this novel is relatively simple. Well, it’s simple until that reveal I mentioned. We have our narrator, Rosemary Cooke. She’s a student at UC Davis who was raised in Indiana. She has a brother, a sister and a mom and dad. We are told pretty early on that her sister disappeared when she was five. And that her brother essentially disappeared not long after. It’s set up almost like a mystery that is intentionally started in the middle of the story. As it progresses, the beginning is revealed and obviously, later on, the end. Rosemary tells us her tale from a first-person perspective, sometimes breaking the fourth wall, speaking to us as the audience, letting us know that she’s telling us a tale and giving us a peak into her process. It’s during one of these asides that she reveals to us that her missing sister, Fern, is not in fact a human being, but a chimpanzee. For some this twist may make the story more interesting, but for me it actually felt like a head fake and made things less interesting and kind of gimmicky.

Rosemary goes on to tell us that her parents sending her “sister” away tore something from her heart and made her feel incomplete and weird and took some of her identity with her. And, yes, the two of them were raised from babies together as part of a psychological experiment her professor father ran with his grad students. And because of some concerns about their safety the parents decided to ship the monkey off when Rosemary is five. She feels guilty, but her brother is pissed. He’s in high school and has a better handle on things, but he essentially runs away and becomes an ALF animal-rights terrorist. It’s an extreme reaction that feels not very genuine or realistic. Also, I’ve had two five-year-olds at this point, and they are far from fully-formed human beings at that age. Removing something form their lives — regardless if it was a primate sibling or not — doesn’t strike me as something that would be as traumatic as is portrayed here. I mean, I don’t know shit, but as a reader, it felt a bit hyperbolic.

So once we’re let in on this life secret, the story — at least for me — actually has lower stakes than it would have had if we followed the well-formed mystery of what happened to Rosemary’s siblings. The fact that it was her pet/sister that was sent to live at a lab is an interesting premise, but in practicality removes some of the urgency and emotional heft had she been a person. Maybe that’s the point Fowler is trying to make, but it just didn’t land with me.

The things is, I enjoyed Fowler’s writing. It’s not overly flowery or pretentious, but is just literary enough to make it feel like a “quality” read. It has all the hallmarks of familiar literary fiction: writers writing about writers, academia, familial strife, alcoholism, mental illness, death and regret. There is also some humor infused throughout. Not like ha-ha humor, but enough levity to make the book not a total bummer or weigh it down with constant sorrow. Fowler does a good job balancing the internal drama with the action and keeps things moving along in a breezy way that doesn’t bog things down too often. There are a couple spots with the brother and his activism that feel a little muddled, and I could have done with less of some of the side characters, but her protagonist, Rosemary, is an interesting enough character that you don’t mind spending time with her.

I’m having trouble putting into words what exactly I was missing here. There was something about the book that felt a little like a paint-by-numbers literary narrative that tried to raise the game with what amounts to a gimmick. The start-from-the-middle narrative structure and omniscient, but unreliable narrator was actually something I enjoyed, but has become pretty standard in our post-modern lit world. It was the damn monkey. I think it’s one of those things you either buy into, or you don’t. I just came down on the wrong side of that equation and felt it could have been better with less primate.