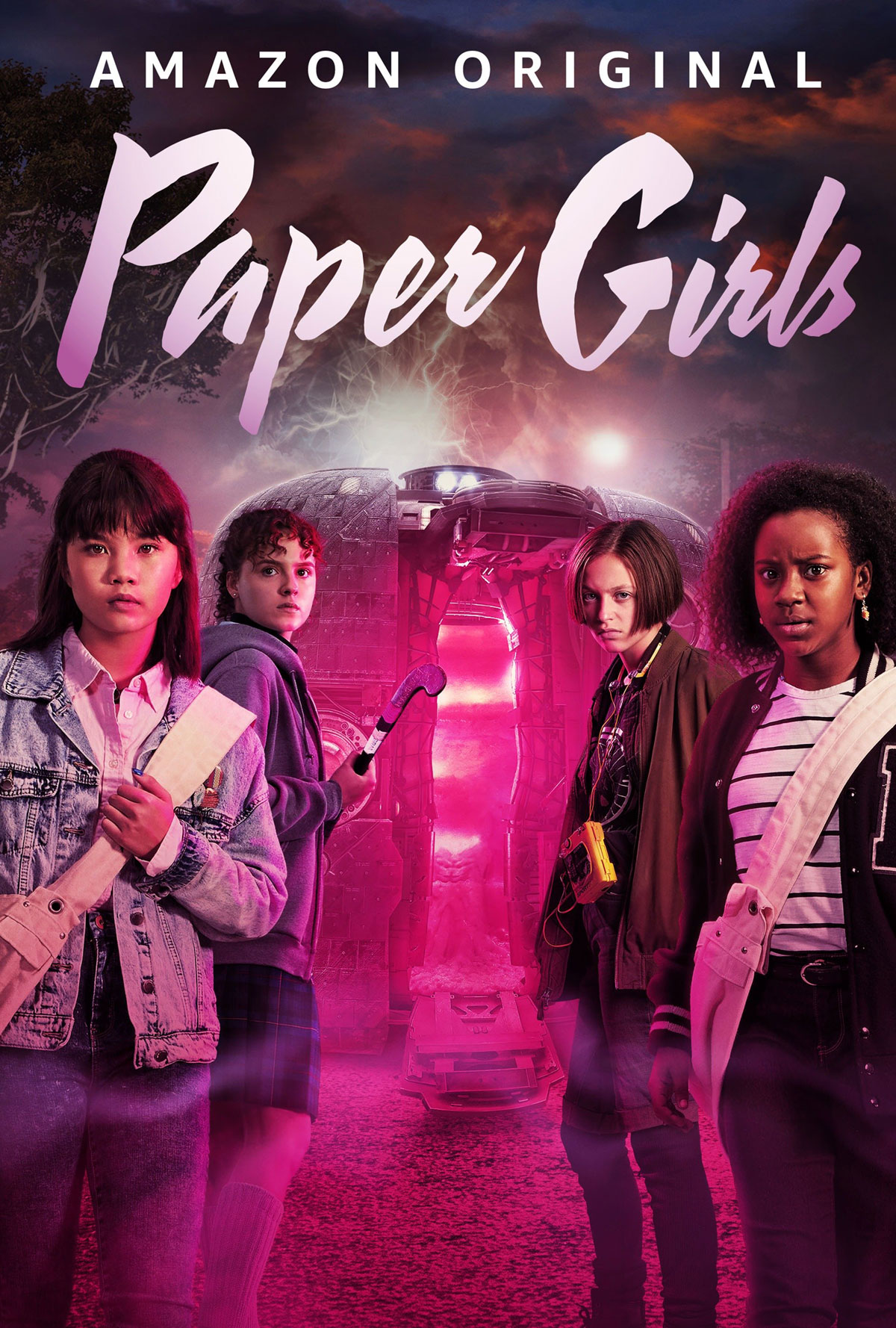 Here’s me, a grown-ass man, watching yet another YA comic book adaptation. It would be embarrassing at this point if it were not for the fact that Hipster Jr. Jr. watched it with me. Or, rather, I watched it with her. But, of course, it was my idea. I had to pitch it. I had to point out that there was a lull in the Marvel Disney+ lineup at the time. And I had to point out that the actual girls in Paper Girls were right around her age. And that there was some sci-fi drama and stuff involved. She finally relented, so we dove in. Am I glad I employed such a hard push? Mostly just to spend some time with her, but also hoping this series would actually be decent? My thoughts are mixed.

I think somewhere in their heads the Prime Video people thought this could be the next Stranger Things. It stars young teens, mixes sci-fi and some mystery and takes place in 1988. Sure, it’s pre-existing IP, but on the surface it has some of the same flavors. But if the folks at Amazon really thought they had a hit franchise on their hands anywhere on the scale of Stranger Things, they seriously miscalculated. In fact, they miscalculated so badly they ended up recently canceling the show prior to a second season. Whoops. Not that there aren’t all sorts of things at play when planning and scheduling content, but this almost feels like a show that had a plan that was certainly more grand than the end result.

Based on what I gather was a relatively indie comic book, Paper Girls follows four girls who are… paper girls. Which, from what I gather, are like paper boys but identify female. Which, in the case of this pseudo-period show includes female humans who are too young to be called women. Thus, girls. I’m obfuscating because I don’t really want to go into the plotting. It’s kind of nonsense. But, in short, the girls (in 1988) are delivering papers in the early morning after Halloween, and somehow these twelve-year-olds (who are clearly not twelve) end up fighting with some town bullies and then committing one almost-murder, only to then commit an actual murder (with a field hockey stick) to then be hurled through time to 2019. None of which makes a lick of sense. Especially the fact that we’re supposed to believe that these girls’ parents would let them out, at twelve, in the middle of the night in a town that is apparently filled with very early-rising bullies. Or late-night bullies, I guess, who love to, for some reason, pick on little girls? Who, as I mentioned, aren’t really all that little. I didn’t read the comic book, obviously, but I truly hope the setup was different and better there, because this whole getting-them-to-the-future scenario was super-clunky.

Now in 2019, the girls find themselves in this silly war between a pretty annoying Nate Corddry and his loser crew and a time-based group that is ostensibly lead by a guy whose name is Grand Father. Which I heard as “grandfather.” And is played by Jason Mantzoukas, who is almost as annoying as Corddry. Mostly because he does his Mantzoukas thing while partnered with what I think is a pterodactyl. It’s goofy. Whatever this war is between these factions has to do with time and time travel and is basically a kind of lame version of the Time Variance Authority in Loki. I think. Basically the entire dynamic here is yada-yada’ed in order to get to the meat of the narrative, which is the girls seeing and interacting with future versions of themselves to see where their young, adolescent lives go once they leave the cocoon of youth and grow into grown-ass adults. Which — if I was making this show — would have had me rethink making the girls twelve in 1988. Having a daughter that age just recently, they aren’t cognizant of cause and effect. They don’t know what it means to live an unsatisfied life, or an unfulfilled one. These concepts would be lost on them. I think they trapped themselves making the girls paper girls, ironically. It would be much more effective if they were, say, sixteen when they zapped back in time. Their interactions with themselves would bare greater weight. But a sixteen-year-old paper girl? Maybe the show could have been called “lifeguard girls.” Or “waitress girls,” where they worked at a future-themed diner in their little town or something. Anyhow, I’m not the comic book or show creators, so I get no say. Just sayin’…

I feel like there’s a saying that it’s never a good idea to meet your future self. But I’m probably making that up. Regardless, if this show is a guide, it seems like a bad idea. It mostly doesn’t go so well for our fearsome foursome. Save one, who realizes in her future — after they travel back to 1999 in a giant robot thing (don’t ask) — that she’s a lesbian. Which at first horrifies her, but then clarifies for her why she doesn’t want to wear that ugly 80’s dress to her bat mitzvah. Seriously. But, hey, at least she’s a happy lesbian with her art-school friend. Despite earlier murdering a dude with her hockey stick. The rest of it all has an unintentional bit of a Bill & Ted hide his dad’s keys behind the plant energy. But with some seriously cringey college sophomore bullshit that no kid (or adult) would possibly ever care about. Like the series’ writer seriously quoting from his/her film class paper about Stanley Kubrick’s oeuvre in scenes taking place in 1999. Not 1969, 1999. Because what twelve-year-old girl doesn’t care about Barry Lyndon?

Look, I know this show wasn’t written with me in mind. I appreciate that they employed four relatively unknown actors in the lead roles. Not that I know a ton of teen actresses, but I’ve certainly seen enough Nick and Disney shows with Hipster Jr. Jr. to know there is a cadre of them always on tap. Granted, I suppose the ones I’m familiar with have aged out at this point. They’re doing like HBO TVMA dramas now, no doubt. Or like headlining a Disney cruise, or whatever washed up singer/actor child stars do these days. The acting itself is a little uneven at times, as these newcomers show their lack of experience. But there is some charm in it, in the same way there was on the first season of Stranger Things. Unfortunately, though, the show itself is just missing something. Putting aside some of the laughable special effects, there is a warmth or a truly nostalgic feel that just isn’t there. The more successful of these shows and movies strive to emulate that “Spielberg” mixture of warmth and wonder, fear and humor. This one felt more like Spy Kids. Which has its fans, but is a series I absolutely loathe. Like I used to have to leave the room when the Jr.s had one of them on. This isn’t that, but for some weird reason it left me cold in the same way. Perhaps it was the awkward writing, stilted acting and sometimes troubling graphics. Whatever the case, I certainly didn’t hate it in that way. It was fine. But fine isn’t enough for us, or for Amazon, to take a chance on more of the same.