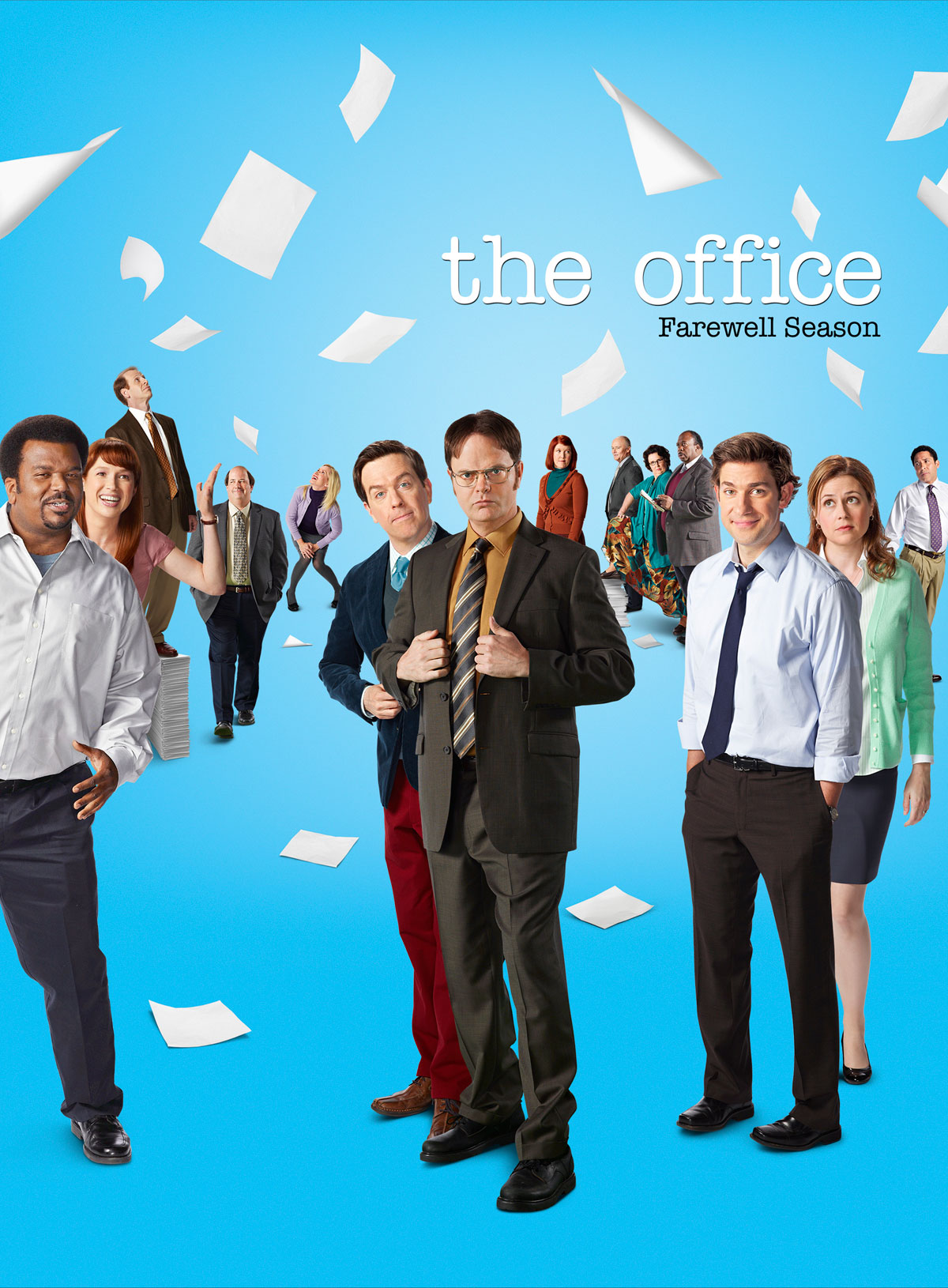 Watching nine seasons of network television is a slog. Especially when each season has around twenty four episodes. That’s 201 episodes in all. That shit is Herculean! But this is what happens when you have yourself, Ms. Hipster, Hipster Jr. and Hipster Jr. Jr. to satisfy when leaning over the family room table on a nightly basis for weeks and weeks on end. And while The Office isn’t always “family friendly,” it’s about as middle-of-the-road as it gets when it comes to something that will satisfy everyone. Despite an amazing amount of sex talk, which is pretty much par for the course for your mid-aughts office sitcom.

Now, I watched every episode of The Office in its first run, which ran from 2005 to 2013. This was back in the day when NBC had shows that were appointment viewing. It was the heyday of ER, after all, and there were plenty of other ensemble workplace comedies like Community, 30 Rock and Scrubs that really built a brand for the network during that time. And I watched ’em all. But The Office was king, because, unlike those other shows, it kept the quality up through its entire run despite major departures. And while it didn’t necessarily have the comedic highs of some of the outrageous and/or experimental episodes of those shows, it was consistently funny and a really solid show. You kind of knew what you were going to get on a weekly basis, and that was heartening. It’s a conservative show in many regards. The format is always the same, the characters follow the same schtick and there is very little jarring about any of it. These others — especially towards the ends of their runs — broke way the hell out of the box and did some whacked-out shit that sometimes made you feel like you had taken the bad acid. Sometimes it was mind-blowing, and sometimes it was downright weird and bad. Regardless, they all kind of limped to the finish line, almost lampooning themselves, while The Office was an A- player throughout and really knew that the audience cared deeply about its characters and wanted to remain true to them until the end.

Does that mean there weren’t moments of laugh-out-loud awesomeness? Of course not. Does that mean there aren’t some of the most awkward, uncomfortable moments in the history of television (which has become the original Michael Scott, Ricky Gervais’, whole thing) that they more than likely borrowed from the British series on which this American version is based? Sure are. There are more quotable things in this series than almost any other in modern history. There are characters that warm our hearts at their mention. Pam and Jim are like the totem for every couple. People actually know where Scranton, PA is because of this show, for god’s sake. It has to be in the top ten favorite American television shows of all time, hands down.

But let’s look at something. The entire conceit of the show is nonsensical. Here’s this dinky paper company in Scranton, PA that is filmed non-stop by a PBS film crew for eight years. In their office. In their homes. Everywhere. Sometimes they remind us that this is technically a documentary, but other times they kind of drop the conceit all together and film it as a traditional TV show. And that’s all fine, but when, in the course of the 200 episodes, you just stop and think about how weird it would be if there was really a film crew standing there when some things were going on in these people’s lives, it would make you roll your eyes into the back of your head. That aside, who the hell was the executive at PBS who thought this would possibly be interesting? I mean, how could they know when they started that the boss would be a complete and utter idiot and that this would clearly be the most dysfunctional workplace on Earth? I mean, it takes eight years for people who are completely inept to get fired. And it’s really, really hard to get fired from this company. Just ask Dwight, who shot a gun off in the office, and Andy, who took off for months on a boat without telling the boss.

And the parties. I think they spend the first few seasons of the show with every other episode revolving around the planning of a holiday party, birthday party or some other kind of party. And then every off week revolved around an un-PC meeting called by Michael where he is entirely racist, homophobic, fat-shaming or otherwise just a complete, self-absorbed dick. But we still love him somehow.

And this all goes back to heart. The show isn’t stretching the genre. It’s a throwback in some regards, filming most everything either in the titular office, in a car or in another office. The main characters develop over time, but the surrounding cast are usually comic foils or people for the others to play off of. Meredith is a drunk who shows her boobs for no given reason. Stanley is a lazy (but not when it comes to his philandering), grouch who just wants to retire to Florida. Creed is a weird old man with a sketchy past who manages to hang out for years without ever doing anything of substance. Kevin is dumb. Everyone thinks Phyllis is a sad sack, but she’s probably the most well-adjusted and confident person of them all, happily married to (and horny for) Bob Vance of Vance Refrigeration. Everyone hates Toby because he’s pathetic and dull. Kelly is a ditz who knows nothing and lives for reality TV and is the perfect victim for Ryan’s douchebag MBA bro character. These are their basic character sketches and they don’t really break out of them. They’re reliable pieces in the puzzle. Occasionally they’ll step into the forefront of an episode, but then fade back into the background, only to step up to deliver their reliable lines and go back again to give someone else a chance. It’s formulaic, but we come to rely on Stanley’s sour face and Kevin’s love of donuts to ground us each week.

So where does the tension come from? Well, there isn’t any, really. This is wholesome TV with a bunch of sex jokes. It’s a sitcom, and sitcoms rely on you liking the characters that you have to live with each week. They can’t ever go too far afield or you lose their audience. Even when Ryan becomes a coked-out city-dweller, ends up in rehab and is knocked down to office slag again, it’s righteous comeuppance for a character we are begging to see get taken down a few pegs. Every time Michael does something offensive or stupid, we’re treated to him coming back to zero by doing something sweet or genuine. Or are reminded that he’s a loser and we should pity him. Later in the series we are sold on minimal tension in Jim and Pam’s marriage, but we know that the tension is not going to last and we will get a teary moment of non-cynical loveliness. One wonders if this series was happening in the 2019 market if Michael and/or Andy would secretly be murdering new employees and storing them in the dropdown ceiling. The whole endeavor feels of a time past.

So, what is the endearing and lasting quality of the show? It’s Michael Scott and Pam/Jim. While Steve Carell was on the show, he was clearly the focus. It was always intended to be Michael Scott’s story. A man so ridiculous that we can’t help but write off his terrible qualities and appreciate his good ones. But the writers have to keep those heart-felt moments for those special times because he was being relied on to be both the comic relief and heart of the show. Enter Jim and Pam, the only background characters that felt “real” out of the gate. They didn’t just step up, do their schtick, and fade away. They were the screen onto which the audience is supposed to project the real emotion in the show. The “will they or won’t they” thing that has been the driving force behind television comedies since the beginning of time. And at some point they became the focus of the show and Michael Scott became the wacky neighbor. The Kramer. The “that’s what she said” guy who could occasionally step forward to inject some feels, but it became the Jim and Pam show for the true Office heads. And when Michael exited and Andy stepped in, it was fully their show to lead. It wasn’t as good of a show with Carell gone, but they managed to pull it all together at the end as they sidelined the awful Andy (realizing, perhaps, he was no Michael Scott) and elevating and deepening our relationship with Dwight — the Germanic beet farmer who was a softy after all.

This is all to say that it was great revisiting this show. It’s so different than most current programs, even another current Michael Schur show, The Good Place. Though it is certainly infused with some of the same-ish positivity. It’s a no-concept series that somehow managed to maintain quality over almost a decade’s worth of episodes. John Krasinski will always be Jim, despite moving on to direct movies like A Quiet Place and playing Jack Ryan in his own series. Mindy Kaling has become one of the bigger breakouts from the series, and Steve Carell has been everywhere of late, but will be Michael Scott to most of us as long as he stays in Hollywood. Streaming will obviously keep this thing going for years and it’ll most likely always be relevant because there will always be offices. Unless, of course, we’re all replaced by robots or have to move to underwater pods to avoid the encroaching oceans.