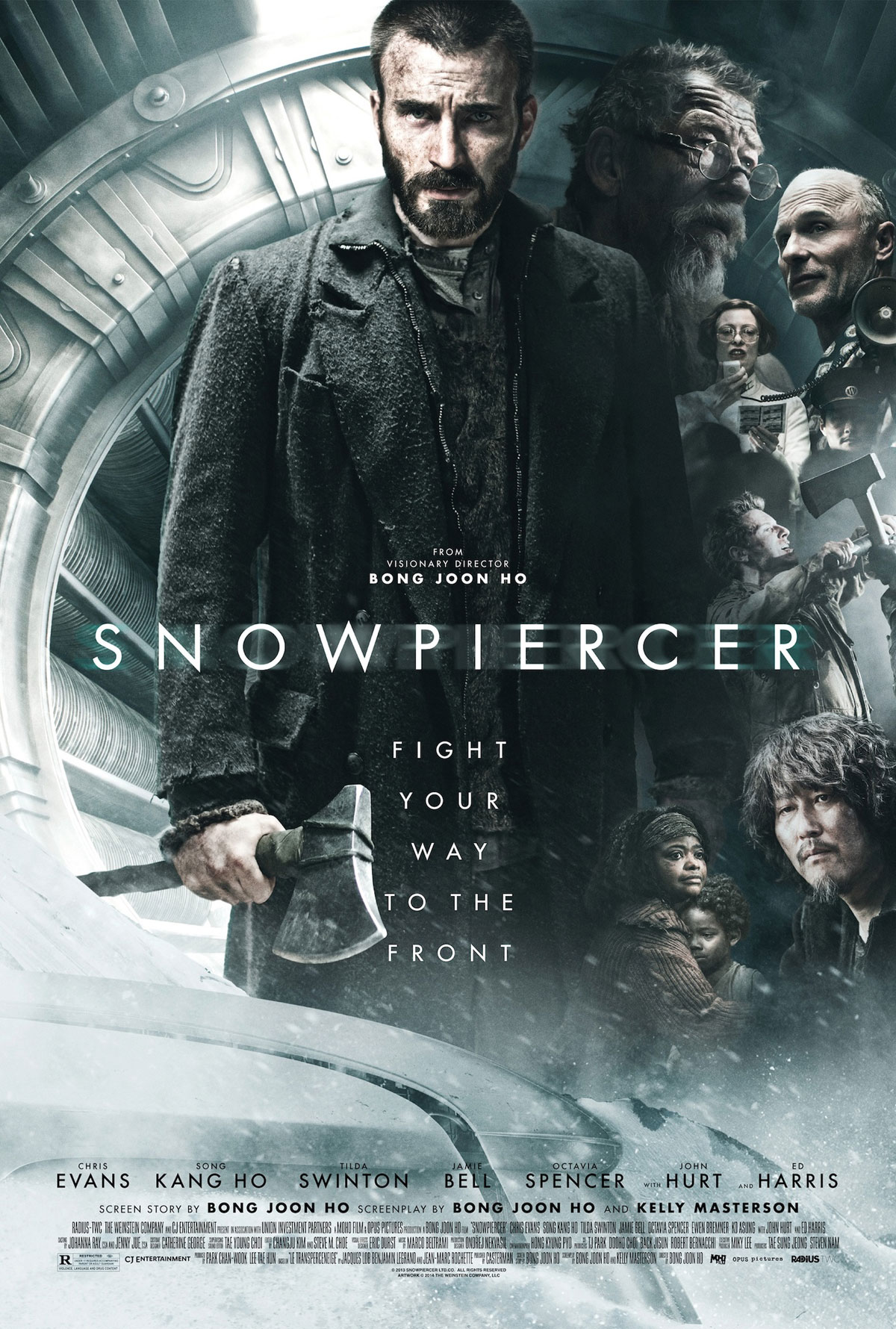 I’d had Snowpiercer sitting in my queue for quite a while. It’s so right up my alley I have no clue what was keeping me from firing it up. Maybe it was the fear that it was like The Road stuck inside a train. Dark and claustrophobic and filled with filthy people and their pustules. I just didn’t ever feel like it. And then along came the year of Bong Joon-Ho. The man was lauded as a genius and all sorts of other hyperbolic accolades. So, I thought, why not bite the bullet and start with his first English-language film?

And, you know what? It was just as cramped and dark and greasy as I thought it would be. Like the inside of a motor of some Mad Max machine. And it stars Chris Evans, which is somehow something I missed when not doing my research. On the surface it seems like an odd casting choice. That dude is Captain America!

But now he’s just an oddly in-shape dude who lives on the caboose of a train that travels an endless international loop around a frozen, post-apocalyptic Earth. A caboose filled with other dudes, women and children who are clearly — and not so subtly — the bottom of the rung of society. A society that is the sum total of humans left on the planet. The logistics of this train car, how and why they’re on it (and have been for twenty-something years), is kind of questionable. But that’s hardly the biggest plot hole or suspect aspect of this train.

These folks in the back car are kept down, fed gross food and basically live in squalor. Over the years there have been rebellions. And it seems another is in the offing. With Curtis (Evans) as their leader, they hope to rebel against the guards and the strange lady with the anachronistic clothes and bad teeth (Tilda Swinton) who comes back to lecture them about the all-powerful Oz — I mean Wilford (Ed Harris) — who built this magical train to begin with. He has this god-like status because he, you know, saved humanity.

The movie goes exactly where you’d think it goes. The gang of back-of-the-train folks battle their way through all of the cars on their way to the locomotive. You know, where Wilford himself lives. There are some cool visuals, as they go through aquarium cars and zoo cars and schoolhouse cars (complete with a homicidal, pregnant Alison Pill). There’s a weird scene where some of the train warriors dip their axes in a dead fish for some reason. I still don’t really understand what that was all about, but assume perhaps it was some Korean symbolism? There is also coincidently an older Korean drug addict fella (Kang-ho Song) who Curtis and his gang break out of the prison car who happens to have created all the locks on the doors between cars. And, even better, his addict daughter also happens to be sort of clairvoyant for some reason that’s never explained.

It just feels that Bong throws everything against the wall. Rules of logic don’t apply. For instance, they walk through umpteen cars and never once do we see sleep cars for any of the rich folks up front. There’s an entire car that seems to be dedicated to a very small sushi bar that’s only open twice a year. Seems impractical. There are also cars that seemingly house just people dressed in formal wear sitting for dinner. And another car with tiny little hot tubs that look pretty terrible to sit in. And another with just a 24-7 drug-addled dance party.

And I suppose all the nit-picks about the physics of the train itself and the questions about if a group of half-starved guys in rags who haven’t had any physical excercise ever could take on an army of armed guards and various other kooks in a very tight space could be put aside. If you kind of ignore the practicality of it all and just take it as a piece of social commentary or a modern-day parable. Because I suppose that’s what it is after all. That said, in the telling there are some sensibilities that feel specifically foreign. Some things that feel like something out of Jean-Pierre Jeunet film that if they were in a strictly American movie would feel awkward, hokey or like poor screenwriting. But because it’s not, we just kind of shrug it off as quirky.

Overall Snowpiercer is a very interesting-looking film. The set pieces are fun to watch and the idea is pretty cool. Does it make sense? Not a whole lot. Do thing happen that are downright laughable? Sure. But this is based on a comic book and directed by a dude with a weird sense of things. So I’ll forgive a lot and give myself over to the world it illustrates. Because, after all, the dude is a genius!