I’m not sure if it was a matter of growing up in the star-obsessed city of Los Angeles, or just the fact I tend to look around a lot when I’m strolling the streets of Manhattan, but I have an uncanny ability to spot random celebrities. Others walk right by the adopted kid from Growing Pains or the guy that played the Iowa Senator’s page on West Wing. Not me. Now some will argue that these people don’t warrant celebrity status, but as long as I’ve seen them in some third-rate tv show/movie/fashion show/ad campaign/concert/music video or any other kind of media in which their visage was somehow seared into my memory, they belong here.

I’ll continue to add people whenever I see them. I don’t count folks I see at work or at a show I pay to see, obviously, but there are character actors a plenty walking up and down eighth avenue if you really look hard enough.

It took me a minute to figure out exactly who this woman was. She’s amazingly thin in real life, and relatively unassuming. That old adage about never being too thin or too rich may actually be proven wrong by Ms. Valletta, as I’ve now seen what too thin is, and it ain’t my thing. The irony, of course, was that I saw her at a restaurant–Caribbean Spice–waiting for a take out order. She was with an older man, so maybe it was his food and not hers at all–but that’s neither here nor there. Apparently she’s a model (which I guess I knew, and certainly explains the skinny thing), but I recognized her from the Harrison Ford/Michelle Pfeiffer movie, What Lies Beneath. The funny thing is that one of my co-workers who was eating with me noticed her, and not realizing that she was a celeb, happened to mention to someone else at our table that a cute girl who looked like Michelle Pfeiffer was standing in the doorway. Of course, if you saw the movie, you remember that there are some freakish scenes in which the two actresses are practically indistinguishable from one another.

Now you know the level of celebrity I’m talking about here. I’m not talking about Brad Pitt or Julia Roberts. But hey, you gotta start somewhere. 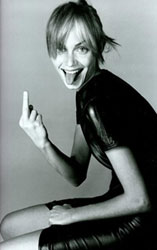 “what’s with the skinny comments, mr. hipster, you little prick?”