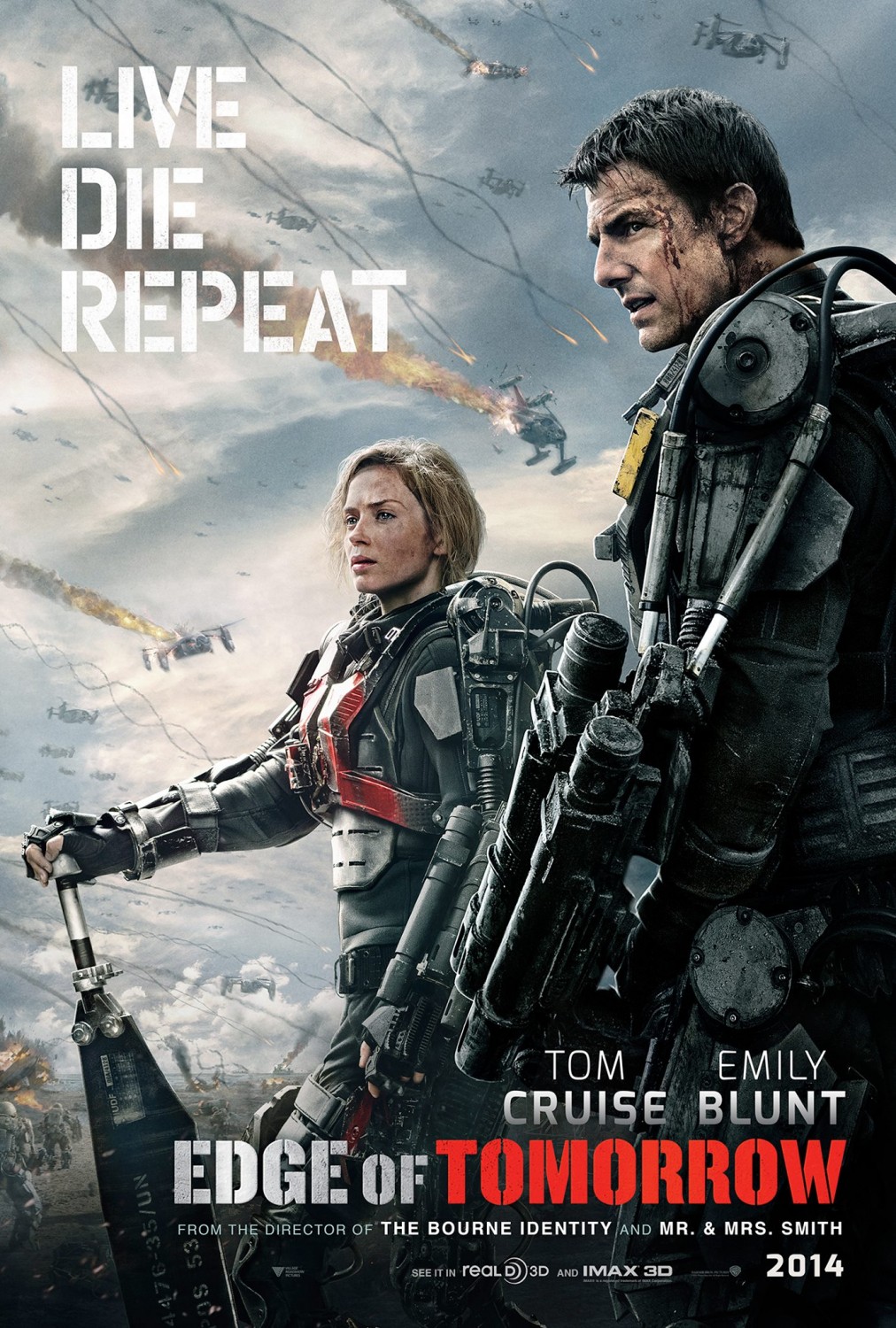 There is something inherently amazing about Tom Cruise. He’s the most insecure cocky guy on the face of the planet. At least that’s how we see his characters play out on screen. His jaw and posture is all bravado and cocksureness, but even in his moments of supreme superiority his eyes are always second guessing him. His mouth is saying the words but his eyes are are always saying “I hope they’re buying this act.” This is what makes the guy likable and somehow relatable, because most of us (save the occasional sociopath) occasionally question our own convictions.

This is something that the makers of Edge of Tomorrow obviously recognized in Mr. Cruise when they cast him in this semi-apocalyptic alien invasion film as the ultra-competent, but ultimately empty flak for the military. He’s the guy who’s technically military, but manages safely from behind a desk and the safety of a non-combat commission. He’s a high-ranking guy who spins stories that affect the real troops for a living.

So when he’s told he’s being sent to the front lines to fight the alien invaders, Cruise kicks his panicky insecurity into overdrive. It’s that frenzied Cruise thing that we’ve seen before, but is always so awesome, as he literally starts sweating and his eyes bug out and he goes into full spin mode when his artifice is found out and he is thrust into a position he is unaccustomed to by sheer circumstance. His physical frantic mess is palpable and translates amazingly on screen.

Ultimately he ends up dropped into what amounts to a D-Day type standoff with this insane alien race and through some coincidental contact with one of the aliens (the larger explanation of which is kind of convoluted and silly) he garners the power to regenerate every time he is killed. Not regenerate like in real time, but, like a video game, is sent back to the moment he is dropped, unsuspecting, onto the military base for basic training for the invasion and must follow all the steps again and again to ultimately “win” the game and banish the aliens.

The movie then settles into a very Groundhog Day pattern of him dying over and over again in varying ways and always awaking to the same sergeant yelling at him as he lay on a pile of bags on the base. And like Groundhog Day, he is the only one conscious that he is being reborn and takes with him the knowledge of the previous engagements he’s had. So each time, like a video game, he knows who to talk to, how to avoid certain situations, when to zig, when to zag, etc. And each time he gets a little further before dying –  or most times at least. So this is the conceit, the setup.

Enter Emily Blunt, the biggest ass-kicker ever. I won’t give too much away, but essentially the two of them eventually hook up (but, of course she has to be re-introduced to him each time he re-spawns) and form an alliance to beat the aliens. Blunt is great as the super-serious grunt and it’s fun to watch her play the straight man to Cruise’s almost comic-at-times soft character. Cruise has really good comic timing and, as always, just puts his all into the role. He and Blunt — but especially Cruise — really make the film fun.

That said, the overall plot is kind of ridiculous, including the overly-complicated and rather dumb explanation of why Cruise gets this “power” and how they can stop the aliens through this absolutely nonsensical method. But, really, none of that matters when you’re watching Cruise scramble and act his way through a pretty f’ing cool-looking version of a real-life video game.