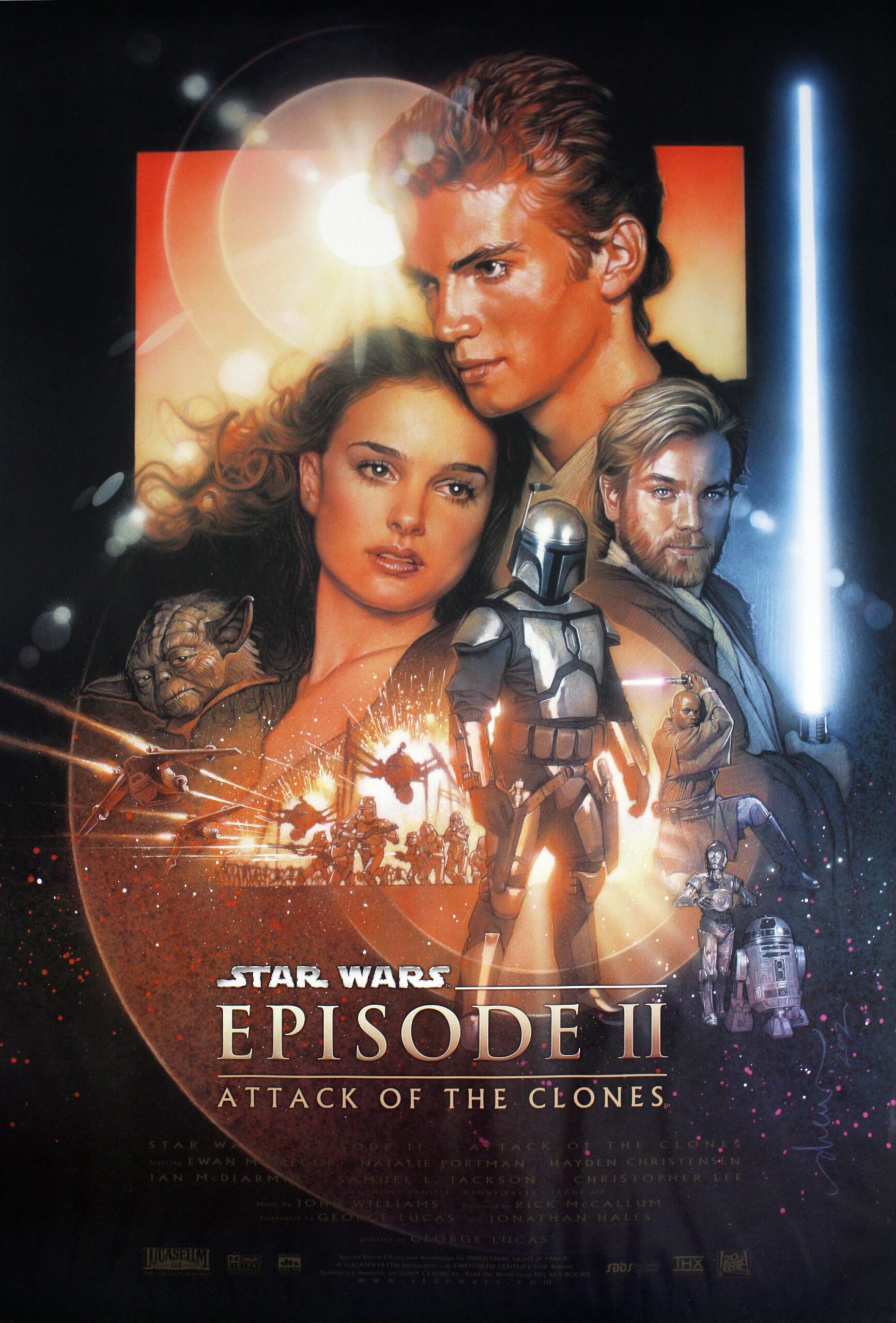 Okay, I’m a nerd. I went to see Episode II on opening night. It’s not as though I brought my lightsaber or dressed up as Princess Leia or anything. Let me also start off by saying that in any other universe there’s no way in hell this film would warrant a three-star review, but, after all, we are talking about a galaxy far, far away… Speaking of different galaxies, Lucas must have been visiting one when he came up with the dreadful title for this thing. Seriously, there were clones in this film, but they did no attacking. They did some fighting, and some marching, but not really much attacking. So that sucked. As we’ve also seen with each installment of Star Wars, Lucas has become totally obsessed with the art of moviemaking, and in doing so has become completely detached as a director of talent — and, most assuredly, as a writer.

There were so many weaknesses in Episode I, it would take me forty years to list them all, but the most glaring problem with that fourth installment was the apparent lack of direction and focus of the actors. They seemed to sleepwalk through their lines, having no clue half of the time what the hell they were supposed to do, or what the hell they were talking about. Good directors get good performances out of their actors. That should be of paramount interest to all directors. Look at someone like Cameron Crowe. The guy can take a mediocre to poor actor and get her nominated for an academy award (um, Kate Hudson anyone?) Actors need to know what their characters’ motivations are, why they are saying the lines they are saying. With Episode I, I don’t think Lucas even really knew. Not to mention the fact his casting director was asleep at the wheel when she cast that wretched little boy to play Anakin.

Anyhow, Lucas seems to have regained some of his focus on the actors in this film. McGregor was much better this time as Obi-Wan, showing a bit of the sly, sarcastic humor that Alec Guinness brought to the character in the original. Natalie Portman is very nice to look at, and I didn’t really notice if her acting improved. But her wardrobe certainly did. Hayden Christiansen was decent as the young-adult Anakin, and really made the best of a pretty bad situation script-wise. And that’s where the writing comes in. I’m really starting to think Lucas is horribly out of touch with reality, or is just not a good screenwriter. I think after watching this that it’s a little of both.

First, the guy needs to stop trying to reinvent the cinematic wheel, and concentrate on writing some compelling, or even not laughably bad, dialogue. Honestly, there were scenes in which Anakin was professing his love to Amidala, and the whole audience was rolling with laughter. The sad part is, I believe Lucas was trying to be earnest in these scenes, playing them as serious, poignant moments. They came off more like a teenage virgin at summer camp begging his high school girlfriend to sleep with him — complete with unbearable lines such as, “Sand is so rough, but you’re not rough, you’re… smooth and soft [or something like that].” This was all delivered while reaching for her chest. There were also scenes of the two kids rolling around in a grassy field, under a waterfall, on top of some weird creature. It was sappy and actually painfully funny.

There were other problem scenes that involve people falling out of spacecraft presumably flying at hundreds of miles per hour, and getting up as though they had just taken a tumble out of bed. You know, suspension of disbelief kind of things… So, why the three stars you ask? Because I had a lot of fun. Some complained the movie was achingly slow at parts. I didn’t think that was the case. A futuristic chase scene in the beginning of the movie left me excited to go back to the amusement park to ride the roller coasters. It made the silly pod race look like a couple kids riding their Tonka trucks around the front lawn of their parent’s subdivision.

As I said, I got a good chuckle out of the love scenes, and taking them as I did (a horny kid trying to say all the right things in order to get laid) the scenes were actually quote humorous. The battle scenes were pretty cool, and involved a lightsaber battle towards the end that almost made me wet my pants I was laughing so hard (it is a long movie, and I had a giant Coke.) This laughter was not because of the goofiness of the scene, but because it was just so much fun. And that’s really what it comes down to: fun. That’s what these kinds of movies are supposed to be about. I remember waiting in line to see The Empire Strikes Back and Return of the Jedi, just brimming with expectations (Star Wars was one of those faint memories that involved some napping.) I came into this film with expectations that it would suck, and that I would leave incredibly disappointed — as I did after Episode I. Instead, I walked out with new zeal, and a burning sense of nostalgia and eagerness to know how the hell Ewan McGregor is ever going to morph into Alec Guinness.