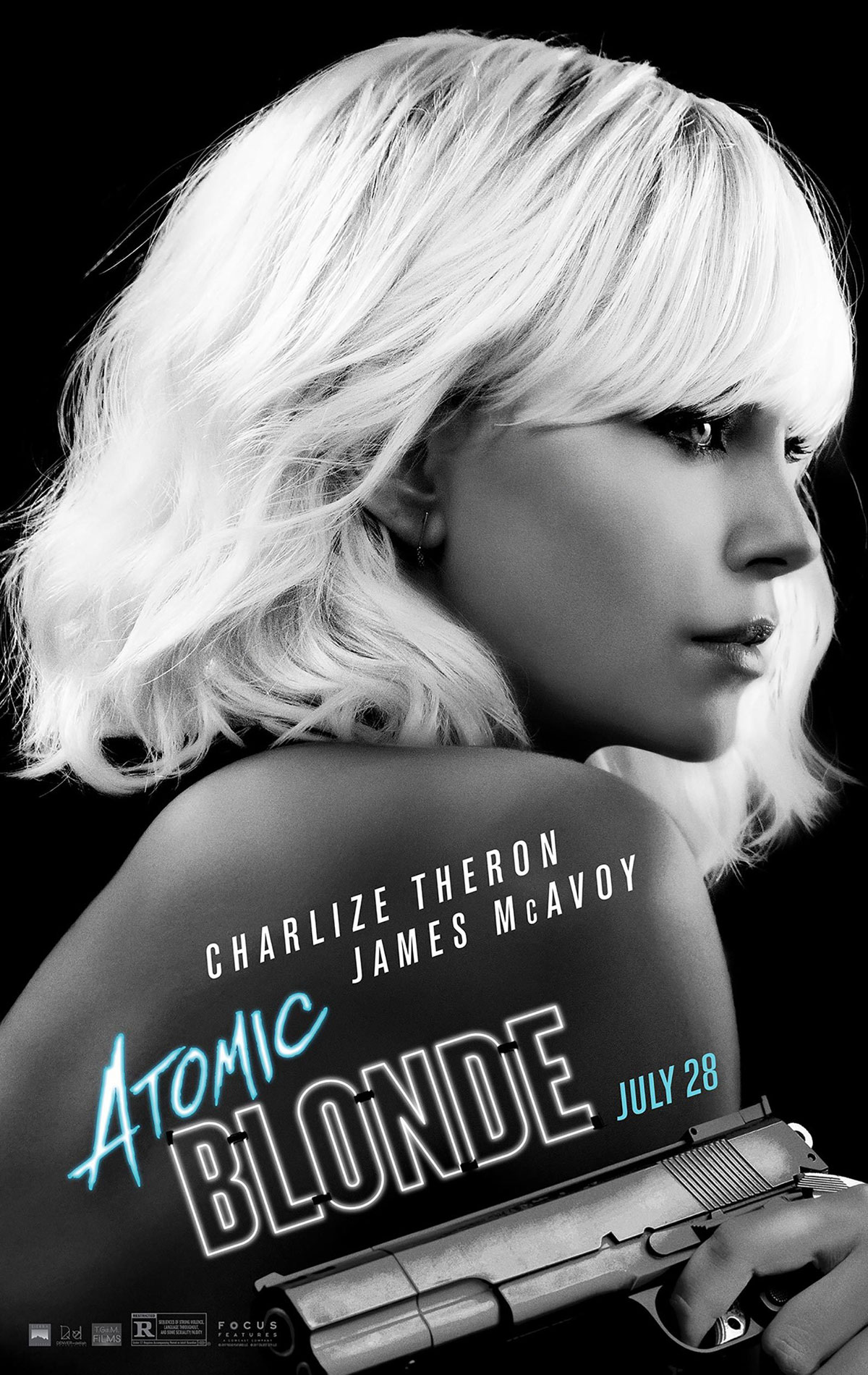 Apparently Atomic Blonde is another movie based on a graphic novel. But in more of a Sin City way than a Marvel, masked and spandexed way. Granted, I know next to nothing about comic books and even less about super hero stuff (despite Hipster Jr. Jr. making me watch the entirety of the X-Men series and everything Captain America with her.) That aside, I was totally around for the fall of the Berlin wall. I mean, I wasn’t literally in Berlin or anything, but I recall watching the thing come down on MTV in 1989. Because I was at that age where if it didn’t happen on MTV it didn’t happen at all. So, why the mention of an event that happened almost thirty years ago? Because that is the event at the center of this spy-filled action film — a great way to incorporate a historical event into the countdown/timeline mechanism that drives the movie’s hectic deadline.

And hectic is just what this movie is. It starts with the murder of an MI6 agent on a gray street in Berlin, followed by scene after scene of Charlize kicking the shit out of dudes while simultaneously getting the shit kicked out of her. Between ass kickings is some spy craft, some lesbian love scenes and lots of shots of late-80s urban skulking. The plot itself is pretty basic. There is a missing list of every intelligence officer in MI6, the CIA, the Stasi and the KGB operating within both East and West Berlin. This list is of obvious concern and desire to all sides and it’s up to Charlize (who plays a Brit in MI6) and her MI6 and CIA handlers to recover the list from the KGB before the wall falls the next day and the job of absconding with the list becomes infinitely easier. In the mix is Theron’s sketchy MI6 partner, James McAvoy, who is seemingly more of a free agent for cash than an actual government agent. There is also a mysterious MI6 double agent operating in the area who could just screw up everything. But the basic conceit is that whichever side ends up with the list is the victor. I feel like this is the classic plot of just about every old spy movie. Whomever recovers the microfilm wins!

The thing that makes this film different is Theron. She plays a character that is achingly human (if a 5′ 10″ blonde bombshell can be human), but also looks absolutely convincing kicking dudes down stairs, shooting guns and pulling some serious Jackie Chan shit. There where several times during her fight scenes where I definitely laughed out loud at the utter destruction and brutality that occurs as she smashes furniture on dudes, gets thrown around like a rag-doll and looks like one of the best female action heroes I’ve seen in quite a while (or maybe ever?). Mostly because they treat her fights like they would a male hero’s fights. She takes tons of damage. Sometimes she’s even overmatched, but gets lucky or uses her brain to avoid death before her opponent. She comes out of things with bruises and black eyes, bloody and with a limp. She’s no Wonder Woman, emerging without a scratch and her hair in perfect shape. It’s a real action film with great choreography and a plot that is not so overwrought so as to confuse the crap out of you between excellent set pieces.

And don’t think I mentioned MTV in the first paragraph for no reason. One of the biggest characters in the film is the soundtrack. Filled with scene after scene of 80s songs (some originals and some covers) and that dark neon flavor of Miami Vice, the cinematography and just the overall feel of the film and music capture a time and place that feels very of that time in Europe, but was definitely an aspirational cool that every American kid who ever listened to Depeche Mode was trying to mimic. This thing is just pure orgiastic action and fun — and god knows we could really use more of that these days.