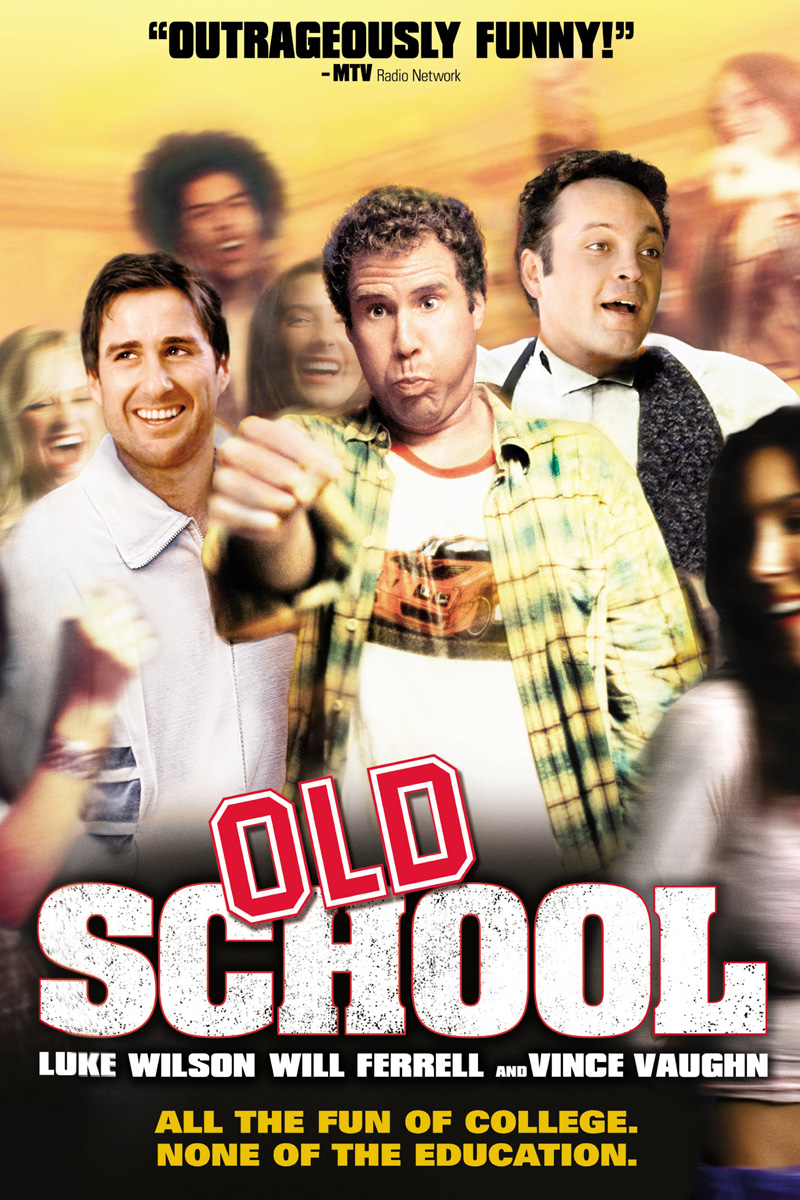 Are we supposed to pretend that Revenge of the Nerds and Animal House never existed? That seems to be what the makers of Old School are asking us to do. Maybe they’re just trying to get over on the kiddies that missed this plot the first fifty times around. I think the target 18-25 year-old male audience would be shocked and horrified if they were to either refamiliarize themselves or see those two films for the first time. This film is so similar, it almost comes off as an homage. I wonder if Tim Matheson gets paid royalties by Vince Vaughn for stealing his Otter character? In Animal House you have the comedy of a bunch of white guys hiring Otis Day to play their party. In Old School it’s Snoop Dogg. Anyway, I’m not going to go into every detail, but trust me, if you’ve seen these two films, you’ve seen better versions of this one.

The silliest thing about this movie is the complete lack of any sense of reality. Where the hell did the idea to start a fraternity come from to begin with? Vince Vaughn seems to just kind of conjure it out of thin air. I guess if he didn’t, there wouldn’t be a movie, right? Wouldn’t the students find the idea of a house full of thirty-something year-old men throwing parties for teen girls to be really creepy? The idea that Jeremy Piven is supposed to be in his mid-to-late-twenties is ridiculous enough in itself, but he’s also the dean of a large university. Um, okay. There’s a fraternity made up of a bunch of old dudes who have no academic attachment to the university itself? There was just very little interest given to any sort of logic in this film. I know this is being picky, but when the conflict in the film comes from the dean trying to kick them off campus (well, duh), then we should feel like he’s not completely justified in doing it? Dean Wormer he is not. Hell, I’d kick the guys out of their house too.

Like Revenge of the Nerds, these guys fill their house with the requisite bunch of bizarre misfits, including the fat black guy, the small Indian man, the accented Asian guy, the tech geek, etc. Again, we’re just not really sure of the motivation here. There are a few funny things along the way, but most of that is generated more by the actor’s delivery than the dialogue or situation. Vaughn seems as if he is going off script every time he talks. He slips into his ad-lib Swingers character at times and delivers some very funny, deadpan one-liners. Ferrell is the physical comic who is just funny because he’s completely shameless. As scene where he crawls into a car packed with his wife and her friends ass first (naked ass that is) is comic only in the fact that you can’t believe this actor is actually doing this–and the actresses look genuinely horrified. Luke Wilson plays the innocent straight man as he usually does, and is funny because he seems like he’s not trying to be funny. Jeremy Piven, usually a favorite of mine, is pretty bad as the evil dean. They give him these goofy glasses (that switch a couple times during the movie) and a bad hairpiece that are distracting. Plus, he’s just not the right person for the part.

It also seems like the screenwriters ran out of ideas right before the third act, at which point the movie becomes completely stupid and devolves into one of those lame competitions that is supposed to wrap everything up. It’s the teen/college comedy version of the musical montage. The movie is only 90 minutes long, and this dumb test to hold on to their charter (whose rules mysteriously change along the way) eats up a relatively large chunk. It was like ending a movie with a shootout. This movie did have potential, but the writers fell into that trap of convention. Oh well, I though Road Trip was lame too.