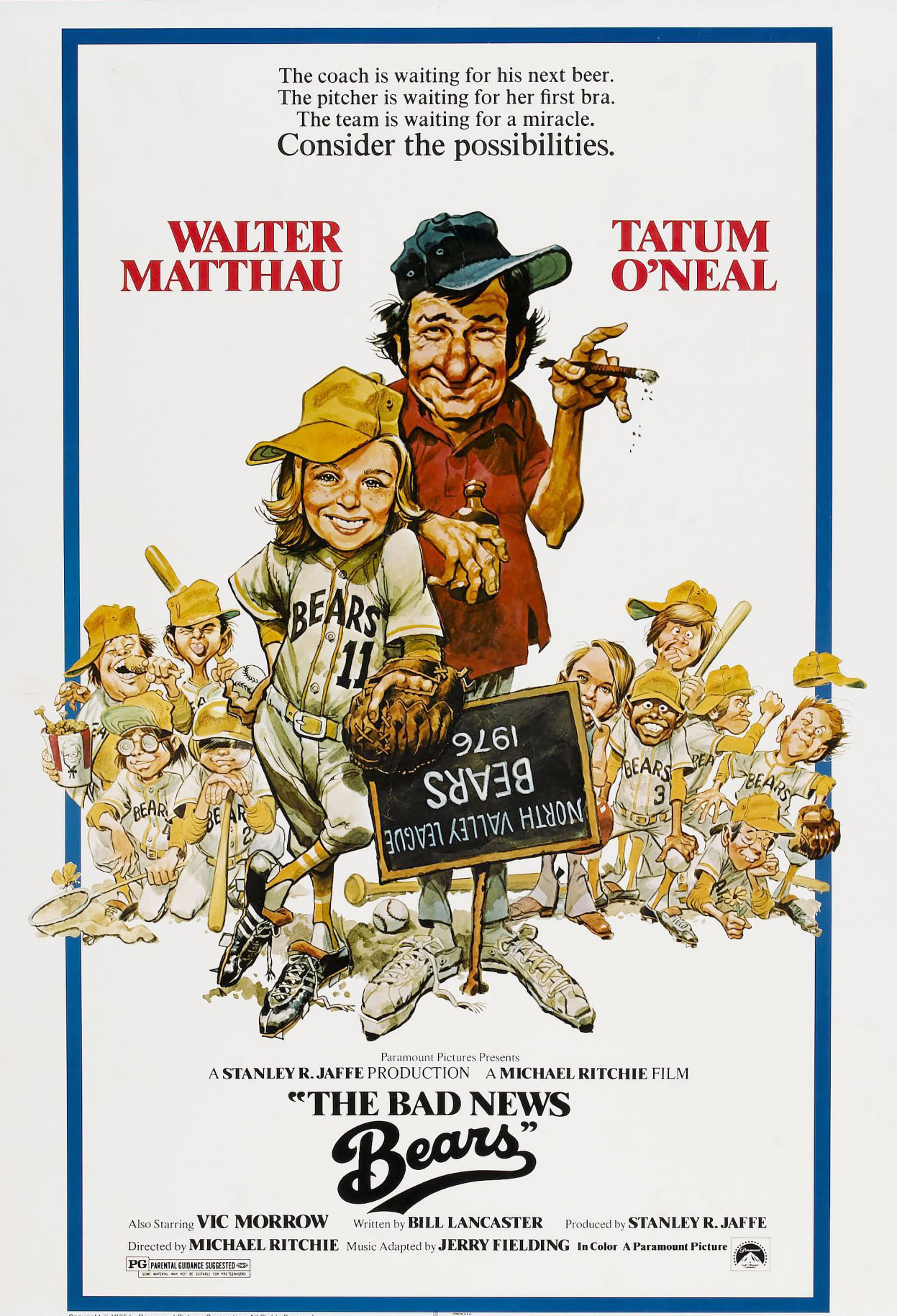 This is the movie that made it okay for me to go see the opera Carmen. In fact, this movie had me humming “Toreador” to myself as an adolescent when I first saw it back in the 70’s until I found out where the hell it came from. How cultured I was! Actually, up until a few years ago I just assumed it was The Bad News Bears theme.

Anyhow, this was the original take-a-bunch-of-misfits-throw-’em-together-and-make-champions-out-of-’em movie. Well, at least the first I know of. And how ingrained in our culture is this film? Anytime a team is having a bad day booting the ball, fumbling, not getting their TPS reports in on time, we hear the phrase “Those guys look like the Bad News Bears out there.” The odd and nice part about this film is that they don’t really make The Bears the lovable losers you’d expect. The filmmaker doesn’t throw a pity party for them, and make them into superheroes or martyrs. They’re just a bunch of jerky kids with a drunk for a coach and no idea how to play baseball.

Walter Matthau, playing the down-and-out coach, Buttermaker, is awesome. He keeps a cooler of Bud or Schlitz on ice in the dugout and smokes cigars as he gets progressively more drunk as the games or practices go on. He makes no excuses for his behavior and doesn’t really care. Eventually even he gets a little embarrassed for the kids and goes to recruit the daughter (O’Neal) of his former girlfriend, whom he taught to pitch back when he and the mother were dating. Unlike most sappy movies, this is not an attempt to get back with the mom, but a genuine attempt to get a good player for the team. (and hopefully get someone on his side before the mutiny begins). Even late in the film when O’Neal gets the idea to invite her mother to the game in attempt to get her and Buttermaker back together, Buttermaker throws a beer in her face and tells her he’s better off alone and she’s better off without him. Another potential cheeseball plot diversion avoided that totally would have been explored in most movies.

Buttermaker also manages to secure the services of Kelly Leak (Jackie Earle Haley), the cigarette-smoking, Harley-ridin’ twelve-year-old who hangs around the baseball fields being rebellious. Despite having an unusually large head on his little body, he happens to be a hell of an athlete. With Kelly and Amanda (O’Neal) in place, the Bears actually start to win and build confidence. The movie takes its emotional twists and turns towards its decidedly un-Hollywood ending. Along the way the film is also decidedly un-p.c. In fact, one player on the team, Tanner, blurts out, after hearing that they’re adding a girl to the roster, “All we got on this team are a buncha Jews, spics, niggers, pansies, and a booger-eatin’ moron!” I don’t think you’ll be hearing stuff like that in other “children’s” movies. Anyhow, watching this again reminds me how sappy, predictable and lame young people’s films are these days. I guess we’ll see if they keep this film’s edge with the re-make. Go Bears!
https://www.youtube.com/watch?v=sF6De-XP7x4