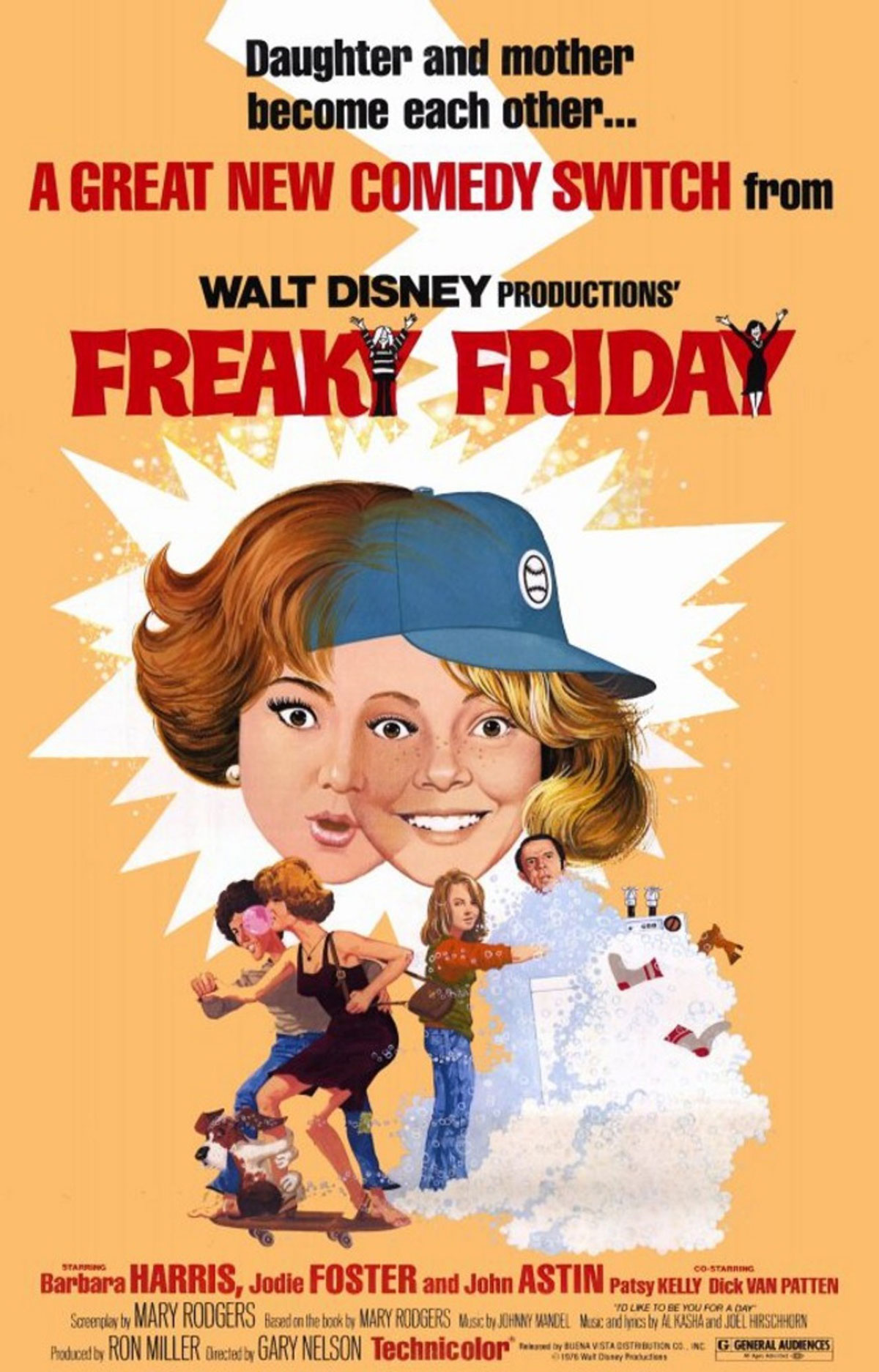 I’m not sure if this movie is typical for 1976. But if it is, people just had seriously low standards for what passed for entertainment. I had seen the 2003 remake of this thing with Lindsay Lohan and Jamie Lee Curtis probably ten times at this point (it was a fave of Hipster Jr. as a kid), which wasn’t a terrible movie at all. It wasn’t fabulous, but it was watchable. It is so much better than this trainwreck that I don’t even know how to compare the two. This film, despite happening in my lifetime, is so thoroughly un-modern that it’s almost shocking. I hate to sound like a college course, but the gender roles almost seem like satire or farcical. But… I’m pretty sure the commentary here is not intentional. It’s just bad.

And, look, I get that this thing is 45 years old at this point (which is very hurtful to me), but Disney might want to put it in the vault and just leave it be. First, Ellen Andrews (Barbara Harris) is a “housewife.” I know that term is outdated in the same way “secretary” is, but that’s what she’s called. Seemingly all she does all day is cook and clean and shop for the family groceries and run errands for her husband, Bill (John Astin). Yes, I get that there are women out there who do this job, but there is something about the way it’s presented that seems particularly reductive and a wee bit condescending. Like Bill is out there doing “real” work, and all she has to do is handle the home and get her hair and nails done. She even gets a maid! Albeit a drunk, surly one. Which in and of itself is weird. Also — and I’m not sure this is intentional or just poor writing — but Bill comes off as a major douchebag. Like verging on being a monster. He manipulates, lies and tricks both his wife and daughter into doing shit for him and his rando mustachioed clients. Treating them, frankly, like the help and barely giving it a second thought.

Anyhow, one random Friday the 13th Ellen wishes she could be her daughter, Annabel (Jodie Foster), and Annabel wishes she could be her mother. After all, Annabel has the carefree life of a teenager and Ellen would no longer be imprisoned in this abusive marriage to Bill (my own commentary included here). And Annabel wants to be her mom because… she wants to hook up with her dad? I honestly don’t understand why she’d want to be her long-suffering mom. But whatever the case, they make this “I wish I could switch places with her for just one day” wish simultaneously, which inexplicably makes them switch consciousnesses. Ye ol’ body-switching thing. Or soul switching, I guess. Which becomes a seriously stupid and inconsistent problem later on. But we’ll get to that.

So, the fun thing here is watching Jodie Foster affect Barbara Harris’ personality and vice-versa. And literally that is the only fun thing about this movie. Because both actresses are decent at it. In fact, Harris is a pretty great comic actress. She is amazing to look at, as she looks almost cartoonish. And while she might not be doing Shakespeare any time soon, she is animated and pretty entertaining. Jodie Foster is Jodie Foster, after all. Even at fifteen she has this swag and presence that is incredibly adult. Shit, this is the same year she’s in both Taxi Driver and Bugsy Malone! It’s funny, as she’s the much more grounded seeming actor that her actually adult counterpart, who is way more ditzy/wacky/zany. Which I guess is what makes the two a good match in a body-switching movie. Which, then, is a weird choice to literally never have them interact with one another when they’re in each other’s bodies. I’m not kidding. They’re never once in the same place when their souls are in each other’s bodies. Um, odd choice and huge miss.

Let’s get this straight: the script here is straight garbage. They had this whole unexplained mind-switching idea and then they just kind of filled it in with nonsense. Like the wife, Ellen, in her daughter’s body going to Bill’s office and body-shaming his sexy new secretary into wearing a comforter over her outfit. I feel like there’s some bubble-gum-in-a-woodwind, and a scene with an overfilled, sudsy washing machine that lasts like what seems like two hours. Editing, man. Essentially there are like six completely unconnected scenes that show that it’s tough for mom to be a teen and tough for a teen to be mom. Again, without either of them interacting. And Bill continuing to be a complete asshat. And then the finale. Which seemingly took up the entire second half of the film. Where the two women decide they want to go back to being themselves…

At which point, instead of their consciousnesses going back into their own bodies, they literally, physically switch bodies this time! I mean, what the hell? And this is all to set up the fact Annabel is — and I wish this wasn’t true — on water skis at the behest of her stupid father in order to creepily entertain some potential clients. And Ellen is driving to the water ski spot in order to tell Bill she and her daughter aren’t themselves. Maybe? Anyhow, they now physically change bodies this time, so mom is now water skiing and daughter — who doesn’t know how to drive — is behind the wheel. But rather than mom just saying, “Fuck this, why am I going to risk life and limb for my husband on this fake lake in the middle of Los Angeles?” she continues to ski out of control. And, now being chased by cops and almost coincidently killing their drunk ex-maid and a bridge full of pedestrians, while also driving a VW bug down stairs and through parks, Annabel continues to press on the gas rather than just stopping. This scene, which is just a bunch of close calls on skis and in a car, goes on. And on. And on. No plot. No nothing. Just endless, poorly choreographed and poorly edited scenes of skiing and driving. At one point Ellen goes across land on her skis, which makes absolutely no physical sense, as the boat pulling her would have also had to travel across dry land. Hipster Jr. Jr. may have even uttered, “What the hell!?” It’s terrible.

So, everything goes back to normal. Nobody dies. But also, nobody seems mad at Bill for being a complete and utter dick through this whole thing. And, again, the two women never crossed paths while in their switched condition. Why!? We also then get to pretend that Jodie Foster (who plays her usual tomboy tough) is even remotely straight when she goes on a pizza date with her “dreamy” older neighbor, Boris (Marc McClure). Though she does invite her little brother along as a buffer. So maybe that should be a hint. And the two ladies don’t seem at all freaked out by the experience. We don’t see them discuss it, and Bill, that jerk, seems to have moved on from the fact his daughter somehow magically became his wife after shoving off from the dock at the water ski place. Seriously, nobody seems to even care that they saw one woman leave and a totally different person come back. Or that one inevitable scene where Bill wanted to get with Ellen, who was, in fact, Annabel. Yeah, not weird at all. I guess we’re also not mentioning Annabel being pursued by and evading the police in a now wrecked car either?

Yes, I know this is a children’s movie. And I’m sorry. I also now realize that writers in the 1970s didn’t take children as serious consumers of media. Like the writers of this movie looked at each other after realizing they had next to nothing narrative-wise, a ton of plot holes, problematic characters and serious issues with continuity and logic and were like, “Eh, it’s a kids’ movie, they won’t notice or care.” I hope that this attitude has changed over the decades, as kids deserve better than a vague concept, a couple decent actors and just a filmed vehicle to sell concessions.