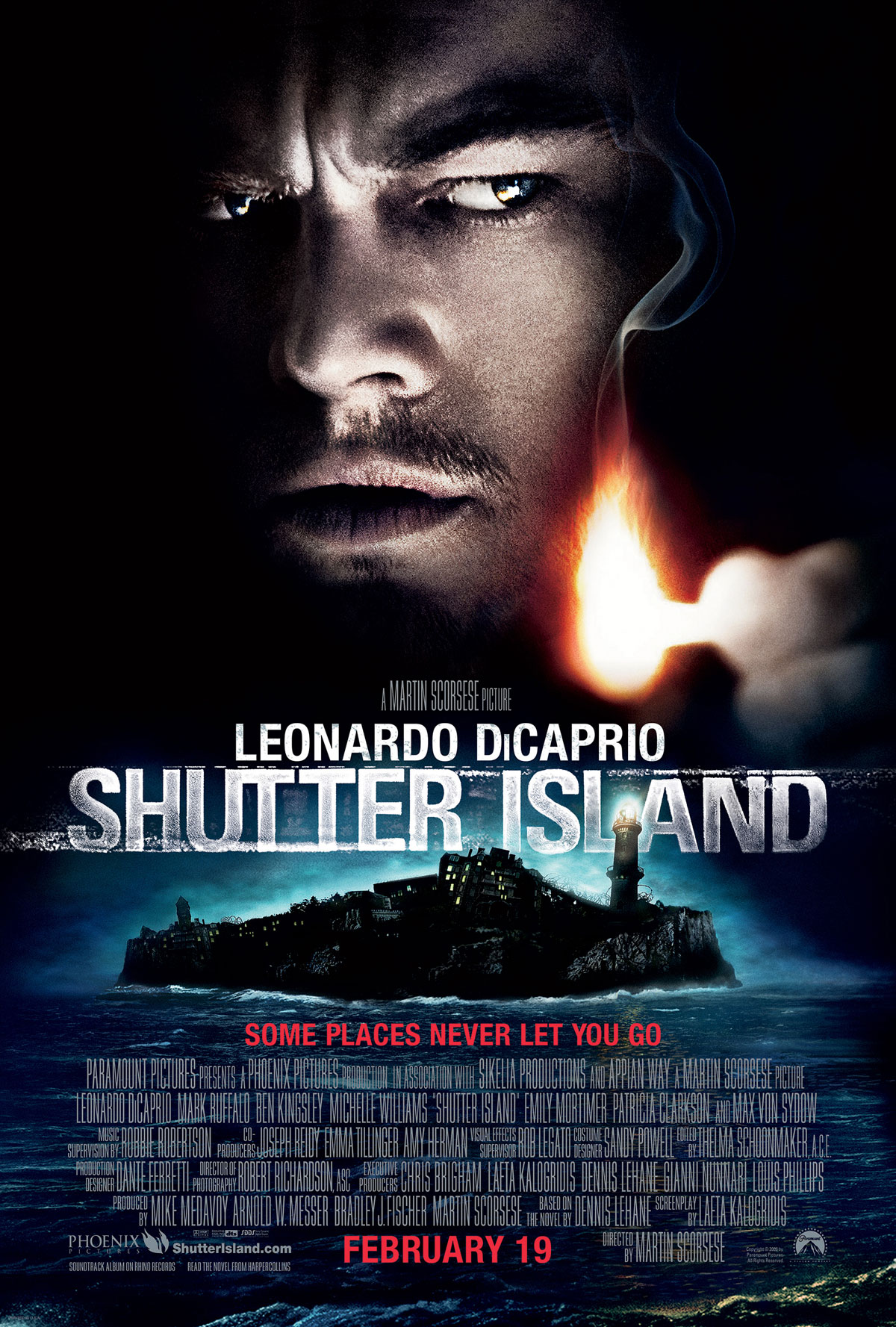 Second rate schlock. I know it’s almost not fair saying this about a film created by one of our best living directors, but in this case I gotta call a spade a spade. It’s not as if I didn’t want this film to be good–I really did, but the transparency of the plot, the clunkiness if the execution and the final handling of the “twist” left me wondering if perhaps this was farmed out to the C-team or if perhaps Scorsese is good at one genre and one genre only and might want to start working on Goodfellas 2 if he has any hope of salvaging the rest of his career.

At the heart of this psychological thriller (the genre, not the actual adjectival outcome) is a mystery around a missing patient at a high security mental institution. Leo and partner, both members of the FBI, are sent in to this insular institution to solve the mystery and apparently find the patient before she can swim from the island to drown her kids again. And there, my friends, is he crux of the issue with this movie. The whole plot revolves around finding this woman who murdered her children. Why? Is this a person who seems like a threat to do this again? It’s not Hannibal Lechter here, or even Richard Ramirez. She seems an unlikely candidate for recidivism considering her mental whatever was clearly aimed towards her immediate family–none of whom are still alive to be harmed again. Stupid.

So here we have Leo in this period piece with his period hat and period trenchcoat and his shaky demeanor and from about the seventh minute we know what the deal is. So we then have to sit there for another 131 minutes watching Scorsese do backflips trying to wend his way around this ridiculous plot. And it’s all nothing but a stage show to throw up smoke and mirrors in front the inevitable twist whose vast lameness lands with an audible thud. In fact the whole movie, and all the discussion that has come out of this “twist” is actually given away when DiCaprio and his partner, Ruffalo, first show up at the island. Ruffalo, whose acting is always subtle and pretty pitch perfect, manages this little act just as he should, but either through a gaff with the direction or the shoddy acting of those around him, there’s a weird moment that’s impossible to ignore as either the aha moment (only a couple minutes in) or a what the hell is going on here, I think there’s something broken with this script moment. Either way it’s a little jarring and really should have either been edited out or toned down. The script then throws all these anagrams and he’s insane, he’s not insane, it’s a conspiracy or maybe not things at you.

And then, in one of the more poorly paced and blocked scenes I’ve seen in a while (on a stage that was supposed to be a lighthouse, but looked like some Lower East Side playhouse’s idea of what a lighthouse set piece looks like and has the budget to match) the whole explanation is unraveled by Ben Kingsley—who just absolutely sucks at playing Ben Kingsley these days. There’s a lot of blah blah that almost comes off as funny as they’re going through it (that’s not a gun you’re holding, it’s a Hostess Twinkie, and you’re not Leo DiCaprio, you’re Danny Taro) and doesn’t in any way convey the sinister and mind bending situation our character is in. It just kind of lies there floundering as Kingsley, in his calm Kingsley voice, goes through 15 minutes of exposition. Inartful and weird. Before that there are weird scenes that make little to no sense, but are again explained away in this last-ish denouement.

I don’t know, the idea here is just too old school and samey for my taste. It’s almost as if this thing is a Hitchcock remake or random homage to a 40s film the way it’s structured and resolved in that talky-talky, summarize it all with the good guys and bad guys way. Overall, there are lots of ideas here, but they all twist around a flawed nucleus. There are like meetings in caves with crazy Patricia Clarkson, rules of something or other, anagrams and other little puzzles that the script throws in there so you can solve the mystery – if only you hadn’t figured it out in the first ten minutes or had a pause button in the theater to take notes about all of the silly things that there’s little to no way to figure out on the fly.