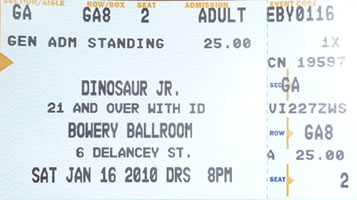 I finally got my chance, albeit twenty years late, to see the now two album deep reunited Dinosaur Jr. at The Bowery Ballroom. I had seen one of the band’s offshoots, Sebadoh, way back when at the now defunct Tramps, where former and current bassist Lou Barlow and his bandmate Jason Loewenstein basically played until nobody was left standing, calling for song suggestions over and over again. Ms. Hipster still has arch-flattening flashbacks of that night and probably lived silently with the fear our Dino Jr. experience would be the same. I told her that this would be quite a different time, but that our first stop on the way to the venue should be at a CVS to pick up earplugs. Thank god.

The crowd was about what you’d expect for a band that’s been around for twenty-five years and has a lead singer/guitarist who majors in guitar masturbation. Meaning lots of dudes, some of whom are graying around the temples, and some younger dudes who heard their cool uncle liked these guys back in his “skating days.” I was a relative latecomer to the Dino Jr. party, my first album being Green Mind in 1991. By that time Lou had already left the band pretty much to start his solo thing. Apparently head honcho, J Mascis, could be a bit of a control freak! My personal history aside, people were there to party. And from the first ridiculous guitar solo, it seemed the boys where there to play their asses off. That was until someone in the crowd decided to complain that he couldn’t hear the vocals. Barlow, apparently off his meds, decided to berate the guy and asked him, “What fuckin’ show did you think you came to see?” Insinuating that Dinosaur Jr. isn’t about singing and lyrics, a semi-slight towards his bandmate, but kinda true nonetheless. Meanwhile, Mascis’ guitar playing was absolutely amazing, but he literally didn’t talk or open his eyes the entire night. Barlow, aside from his short tirade said nothing and stood bent at the waist stroking his bass with his mop of hair in his face. When your Presidents of the United States of America-looking drummer has the most personality in the band, you know you’re in trouble.

As expected the tallest guy in the joint stood right in front of us. He had to literally be 6’8.” And while that would normally be a bummer, he provided us with the first (and finest) example of exactly what we wanted, and knew, would happen: air-guitaring. Trust me, it’s almost impossible not to, but sometimes you have to overcome your desires to keep your self-respect. Big man sold out. He was certainly not the only one, either, as we spied unembarrassed fellows in the balcony, a dude with a ponytail “playing” the solo on “Freak Scene” and several others basically playing Guitar Hero with no controller. I mean, it’s tough. Mascis is like the indie/college rock equivalent of Eddie Van Halen. He can tear the shit out of a guitar. And unlike his hipster brethren, he plays the same ol’ instrument the entire show, tuning up or down between songs. No banjos, no Theremins, no giant Stray Cats axe. The shit was crazy. My only issue with the night–aside from having to keep my earplugs in all night to avoid having my anvils bleed–is that with so many albums to choose from, odds are they’re going to leave out some favorites. I wanted to hear “In a Jar,” dude. But they did play “Wagon,” so at least I walked away pretty happy. So I guess I’ll see these guys again in 2035. 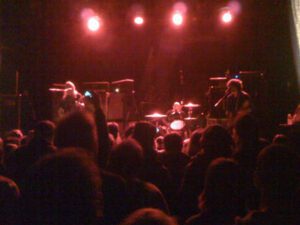